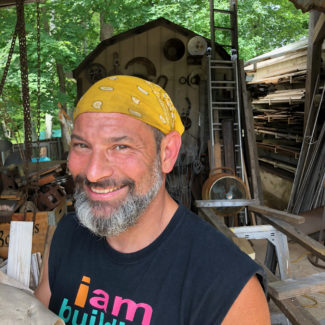 Sparks fly in Eric David Laxman’s studio on Mountainview Avenue. Sanding is one of the final stages in the creation of a large curvilinear metal sculpture he has been laboring over for months. The journey of creating a single sculpture is not unlike his personal journey in learning to survive as an artist. “Creating a life from one’s own art is challenging,” said the Upper Nyack resident. Laxman inhabits a unique niche: creating one-of-a-kind functional metalwork complements his work as a sculptor.

Laxman as a young artist: From building blocks to stone carving

Laxman was always interested in creating and working with his hands. As a child, he arranged blocks and drew.  Halloween was a favorite holiday. One year, when he and a friend dressed as the Lone Ranger and Tonto, he made a papier-mâché horse. He took sculpture classes at RoCA, where three of his sculptures are now on display. A class in clay sculpture with Judith Slane was a personal turning point when he began to dream of becoming an artist.
Laxman credits his science training as a pre-med student at Tufts with giving him a grounding in problem-solving that became useful later as an artist. Organic chemistry was his favorite science class because of its three-dimensional molecular forms. Although he majored in chemistry, art was never far away. A class in stone carving led him in a new direction, and to full-time enrollment at the School of the Museum of Fine Arts in Boston. Almost as a sidelight, he learned welding and metal work at SMFA, all in order to build bases for his stone carvings. Trips to Vermont quarries, with their stone bridges, added a new dimension to his understanding of his materials. Laxman was almost convinced to continue his studio work there.

Carving out a life in Nyack 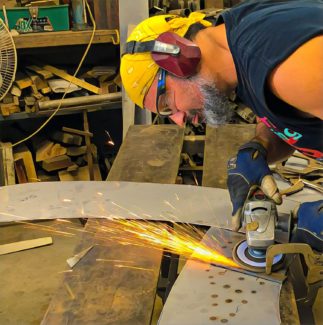 Laxman in his studio

Laxman’s decision to return to Rockland County was an important turning point in his career. He had early success in selling sculptures at the Fine Art Gallery in Piermont, but soon after he found out what most artists eventually learn: selling work is infrequent. With his pre-med background in hand, he started teaching MCAT (a required test for those who want to go to medical school) preparation courses for Kaplan online school. While he was successful at teaching, art was his passion.
In 1996, Laxman attended the International Contemporary Furniture Fair at the Javits Center in New York City. It was a revelation for several reasons. He attended the ICFF with his future wife Marta Siberio, and discovered the world of high-end functional art. Soon he had a booth at the Fair and was finding customers for custom metal railings, wall sconces, benches, tables, and signs like those that greet customers at the Nyack YMCA, Maria Luisa Boutique, or DVine in Sparkill. Word of mouth increased his customer base and, along with commissioned sculptures, he was able to build a life for himself as an artist. Laxman finds that creating functional art complements his sculptures. The problem-solving process from idea to finished product is similar.
Laxman is active in the local arts community. Recently he curated the outdoor sculpture garden at the Edward Hopper House Museum and Study Center, along with designing and creating metal logo frames and railings. 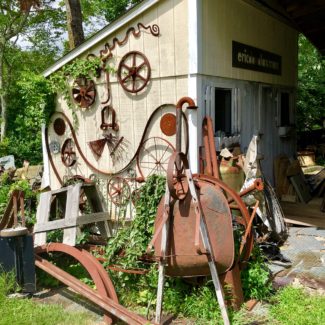 One section of Laxman’s studio

The studio is a distinctive site on the curving Old Mountain Road. The property was once owned by the Garrabrandt family, after which the nearby hill rising above Upper Nyack is named. For a period, Laxman had a large studio in the Garner Arts Center. Hurricane Irene put an end to that when the old mill was flooded in 2011. Since then, Laxman has enjoyed the short commute to his old studio that can be clearly identified by found-metal objects, stone work, and sculptures arranged on and around the wood frame building.
With the physique of a blacksmith, Laxman is able to move stone and large metal sculptures with ease. With one strong hand, he displays a large metal medallion for a commemorative bench; with the other, he points to a large curvilinear bronze sculpture-in-process perched precariously on a large table. The studio is part art gallery and part working studio; found metal art is intermingled with Laxman’s own art. 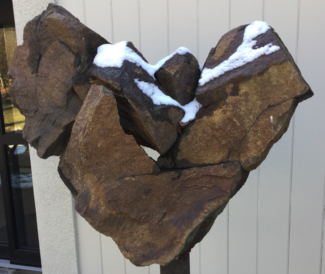 Laxman’s finished works look as if they have just emerged spontaneously from stone or metal. His metal sculptures have a lightness despite their final weight with curvilinear abstract forms that suggest flames or waves. Despite their apparent spontaneity, the process from idea to final form is laborious. Many artists create a maquette (a small model) that is turned over to a fabricator to create the final piece. Laxman views the process differently. He starts with a model, usually in cardboard, that is translated into carefully measured forms for cutting into final shapes, which then need to be welded together and sanded into a finished, polished piece. Many complex problems need to be solved along the way. To Laxman, the process is a revelation and critical to the final artistic expression. Laxman is never sure exactly what the final piece will look like until gets there.

Laxman’s sculptures have appeared in a wide variety of locations, including on Netflix’s Orange is the New Black and Ashford and Simpson’s midtown restaurant and lounge, Sugar Bar. But it’s the solidity of Laxman’s outdoor sculptures that will be remembered for generations throughout Nyack, Rockland County, and the Northeast.
See also: Local Arts Index: Eric David Laxman, 6/15/2013
Michael Hays is a 30-year resident of the Nyacks. He grew up the son of a professor and nurse in Champaign, Illinois. He has recently retired from a long career in educational publishing with Prentice-Hall and McGraw-Hill. He is an avid cyclist, amateur historian and photographer, gardener, and dog walker. He has enjoyed more years than he cares to count with his beautiful companion, Bernie Richey. You can follow him on Instagram as UpperNyackMike.