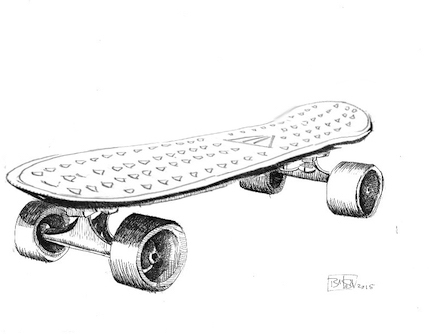 by Bill Batson
Before we had a skatepark, Nyack was home to one of the first skateboard teams in New York, The Wizards.  “Virgin Blacktop, A New York Skate Odyssey” a documentary about the eclectic crew by acclaimed action-sports photographer Charlie Samuels has been rolling up awards on the global film festival circuit.  Just last week, Virgin Black Top won best skate board film at the Portuguese Surf Film Festival. 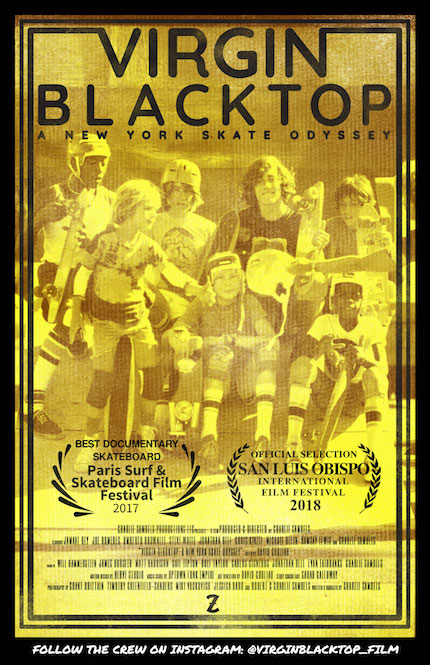 “The Wizards’ skateboard crew began in Nyack’s Memorial Park in 1977. I was super psyched to screen our film, which is set in the Nyack area, to the surf town of Ericeira, Portugal and to bring home an award. Our film shows that the lifetime friendships depicted in the documentary resonate to audiences an ocean away,” said Director Charlie Samuels.
For those who remember the early origins of the hardtop pavement sport, the film captures the growth of the sidewalk surfer culture. But the real magic of story is the unconditional friendships that Samuels both captured and maintained.  Virgin Blacktop “has such humanity to it,” according to Dale Bell, producer of the documentary Woodstock.
When they met in 1977, they had nothing in common except a passion for skateboarding. Despite their vastly different ages, races and economic backgrounds and with their parents hands off approach, they formed a competitive, traveling team of spirited outsiders called the “Wizards”. Charlie Samuels is not just the director of the documentary, but was one of the crew. Samuels was the barely-of-age-driver that chauffeured the team to competitions around the country. When the Wizards took the stage at the Nyack Center in November of 2017 for a special family and friends preview, it felt like a family reunion. 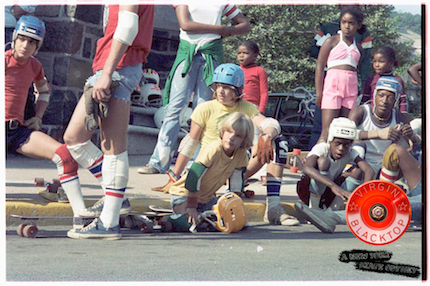 Members of the Wizards outside for the YMCA in the 70s.

“It was the late 1970’s. I was 15 and in love for the first time with a magic device of artistic expression — my G&S Fibreflex skateboard,” Samuels wrote for nystakeboarding.com, where he is a contributor. ” Sometimes I’d lay my cheek on the blacktop and marvel at my translucent red “Road Rider 4” urethane wheels with sealed precision bearings. I skated alone in the Rockland Cemetery across the street from my house in Sparkill, NY, just twenty minutes from New York City. I was psyched when I found several diverse kids in the nearby Hudson River villages of Grand View and Nyack who shared my passion.” 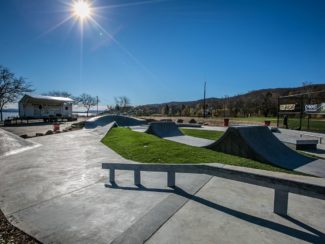 “We loved skating on the basketball and tennis courts of Nyack’s Memorial Park. But when we saw pictures of skateboard parks in our Bible – Skateboarder Magazine – we dreamt of having our own right there. The setting is visually stunning: on the Hudson River with a view of the Tappan Zee Bridge. A few of us lobbied the powers-that-be and failed.  Then, in 2010 Sarah Anderson created the ‘Nyack Needs A Skatepark’ Facebook page.” Samuels enthusiastically joined the effort to secure the park.

The Nyack Village trustees unanimously voted to support the addition of a state of the art public concrete skate plaza, of approximately 5,000 square feet, to Memorial Park in March 2013, after the community efforts of Nyack Needs a Skatepark to gather over 1,000 petition signatures and many Village Hall meetings packed with people of all ages and backgrounds.
On November 2015, the park was dedicated at an event that Samuels attended and described here by NyackNewsAndViews editor Max Cea: “As the sun set over the village, the skateboarders, old and young, black, brown and white, continued to ride. Maybe they were inspired by the words of one of the founding Wizards, Jamaal Bey. ‘Ride until the wheels fall off,’” he said. 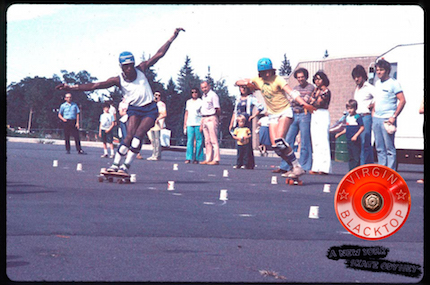 Virgin Blacktop explores the lives of Samuels’ diverse skater crew that met in Rockland in 1977. “It’s been almost 40 years since we named ourselves the “Wizards” – we placed in State and National competitions and one of us went on to be the first pro skater in New York City. Now we are fathers and husbands and our lives have spun off in different directions, but we’ve stayed passionate about the sub-culture of skating.” 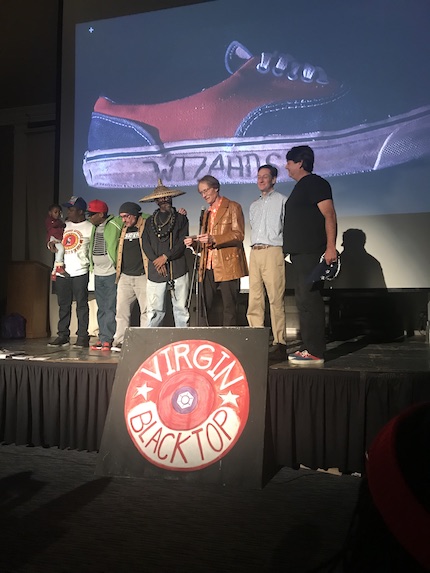 Seven of the remaining Wizards at the Nyack Center

Virgin Blacktop represents the culmination of 21 years of work for Samuels.  After seeing some footage, Penelope Spheres, the director of Wayne’s World and Suburbia said “If your film has half the emotion of your trailer, you’ll have a festival darling on your hands.”
According to Anderson, there are many benefits to the four wheeled recreational vehicle that brought the Wizards together. “It’s outdoor recreational exercise and it’s really fun. You don’t have to belong to a team to participate, but it notoriously brings people together. It’s the 3rd most popular sport among youth ages 8-18, after football and basketball (SGMA study), but it is also inter-generational. In a time when we are all becoming increasingly sedentary and infused with our electronics, it is crucial that youth have a variety of healthy, social, physical activities. Skateboarding is one of them.” 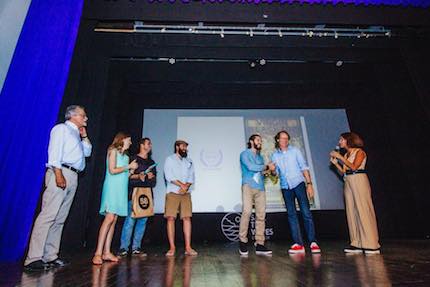 Through the loss of one member, and the incarceration of another, the bond between the 9 member crew doesn’t fray, but tightens. For all those communities around the country that are considering skate board parks, Virgin Black Top is a compelling  testimonial to the power of a sport that combines individualism, artistry, and athleticism. If you ever go down to Memorial Park, check out the diversity of the skaters. If there is one overriding message from Virgin Blacktop, it’s that the wizardry unleashed by this crew lives on through this doc and among its surviving members and those still riding boards.

And thanks to Joe Ondrek for letting me sketch his skate board for the illustration!
Bill Batson is an artist, activist and writer who lives and sketches in Nyack, NY. Nyack Sketch Log: ” Wizards Still Catching Air“ © 2018 Bill Batson.  To see more, visit billbatsonarts.com