by Bill Batson
Since 1954, the Nyack Field Club has provided family-style recreation for its members. The club has prospered on a piece of property that was twice famous, once for hosting world-class tennis tournaments and later as a resort created by America’s first major yoga practitioner, Pierre Bernard. Exemplified by board members that average many years of service, the club is guided by leaders who speak sanguinely of a place where life-long friendships are made. Something in these 12 acres of soil has inspired successive generations to indefatigably organize competitive sports, recreational games and social gatherings. 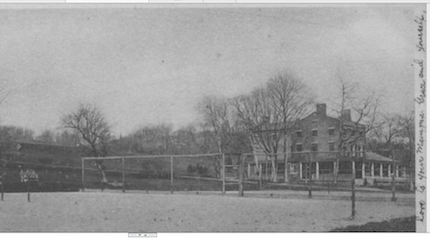 Not every Nyack Field Club member plays tennis, but without the game, a true history of the club could not be served. Starting in the late 1880s, the land that the club now occupies was the site of the World Cup level Nyack Tennis Tournament. The event was hosted by what was then known as the Nyack Country Club and was “held yearly just a few days after the annual Forrest Hills tournament so that international competitors would have another American tourney after having to spend 5 days to get here by Ocean Liner,” according to local historian John Patrick Schutz. 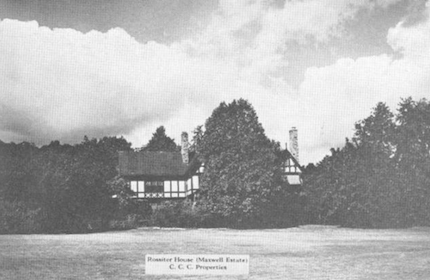 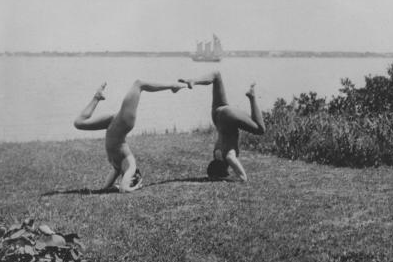 The name of the club changed to the Braeburn Country Club when Pierre Bernard acquired the property in 1918. A yoga teacher to the wealthy, Bernard captured the imagination of enlightened European and American elites as well as the ire of the newspapers of the Hearst organization. Fueled by a xenophobic reaction to a wave of immigration in the early twentieth century immigration (sound familiar?), Bernard was hounded out of Manhattan. The buildings, and tennis courts, were the ideal location for the guru that tabloid dubbed “The magnificent Oom” to create a resort. Van Wyck Rossiter, an executive for the Vanderbilt family’s Grand Central Railroad sold the home that he built as a weekend getaway to Bernard’s wife Blanche De Vries. The Braeburn club’s original foot print stretched from Midland Avenue to the Hudson River.  The estate encompassed the current Upper Nyack Elementary school,  and eventually became the lower campus of Bernard’s sprawling ashram, innocuously called the Clarkstown Country Club.

Local author Holly Caster writes about all things entertainment in Please Be Seated on Nyack News And Views. Whether you cue up to watch it in line or online, Holly has entertainment recommendations and insights about what is new and what you might want to rediscover. 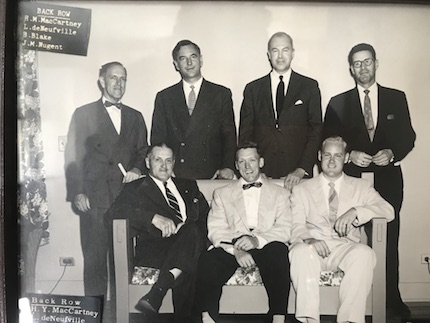 Four local business men, Harold Mac Cartney, Richard Jewett, Homer Lydecker and Orville Mann established the Mid Land Company on May 20, 1954 to acquire the land as Bernard was nearing the end of his epic, vedic run. The next month, on June 12, a board was establish to create a private club.

“It was around the time of the opening of the Tappan Zee bridge,” recalled local architect and long time member John Colgan. “Post World War II businesses were starting to get established in New York City, which reinvigorated suburbia. The founders wanted a place to swim and some early members like Browne, Bachelor and Bromley were known tennis players on the east coast. My father was a member. I came on much later when I had small children. I had played tennis at Nyack High School – with a little cadre of talent including Paul Bernabo and Tom Probert. 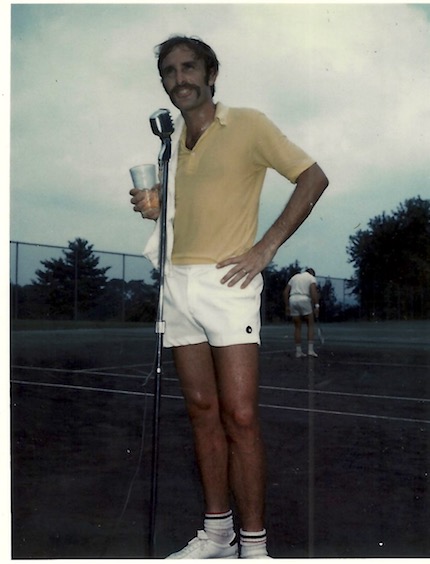 “In 1971, there were only seven tennis court versus ten today,” recalled Ed Sonoski. “I joined for the Tennis. I used to play on the Merrit Courts in Nanuet on Townline Road. We thought it would go down because the patriarch of the club had died. We joined Nyack for the sports and the family. My daughter Jane grew up there. They had a swim team for the kids.” 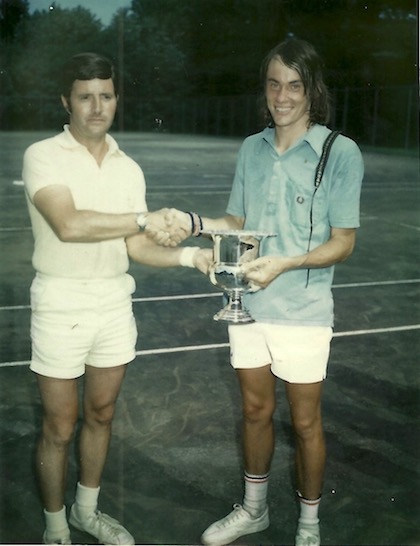 Like Sonoski, Paul Bernabo joined for the racquet sports. “I’ve only had two jobs [at the Nyack Field Club], head of the tennis committee and board president, twice,” said Bernabo. A local tennis legend, Bernabo began playing at Upper Nyack Tennis Club on North Broadway, which used to have four courts. Before shaping the program at Nyack Field Club, Bernabo won the Bryce-Witt Boys Championship at Nyack High School for three years. His game was good enough to earn him a Temporary Duty Year playing tennis in the US Army, where in served in Germany between the Korean and Vietnam Wars,
His impact as tennis committee president was immediate. Under his leadership, the field club hired Gerri Viant as tennis pro in 1983. Viant had been a ranked junior player in South Australia, and had taught tennis in the United States for several years. Viant was asked to help improve the club’s Platform Tennis program.
Platform Tennis was invented by James Cogswell and Fessenden Blanchard in Scarsdale, NY in 1928. The game that is played on a court that is one quarter the size of a standard tennis court,  combining elements of tennis, racquetball and squash. The scoring is like tennis, but players only get one chance to make their serve. Like squash, you can play the ball off the fencing that encloses the court.

Viant was still new to platform tennis when she started at Nyack, but having the need to learn the game so that she could comfortably transfer her tennis skills to the smaller, quicker game changed her life. She has gone on to win eight Nationals Women’s crowns and two runner-ups, with her double’s partner Sue Aery. They were inducted into the Platform Tennis Hall of Fame in 2006.
“When Paul hired me there were very few female head professionals. I was 27 years old and not from the area. He took a chance that thankfully worked out,” Viant said.
“We didn’t really have a year round manager when I arrived – Nyack was really run down and tired, the club had seen better days. We made improvements , we raised the energy.” With Viant’s efforts, racquet sports are now played year-round at Nyack Field Club, from April through October on the har-tru courts and from September through March on the platform and the job of the pro was no longer seasonal. 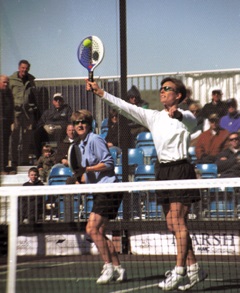 On June 17, Viant and Bernabo were on hand when the court where the club finals are held was re-dedicated as The Paul Bernabo Championship Court.  For the last 25 years, Bernado has been the umpire calling aces and faults court side. Now his presence will be felt forever.
Speaking at the dedication Viant said” Usually in the middle of the day when the sun was at its peak, Paul would slice and dice his way to victory, always giving 100% effort, no excuses, no fluff, just plain and simple, play by the rules, give it your all, may the best man win, and enjoy a coke on the porch afterwards. And on a weekly basis, his social skills were on full display, as he embraced playing mixed doubles with his wife Myrt, who is also a great competitor and exemplifies how sports at the Nyack Field Club and Friendship goes hand and hand. 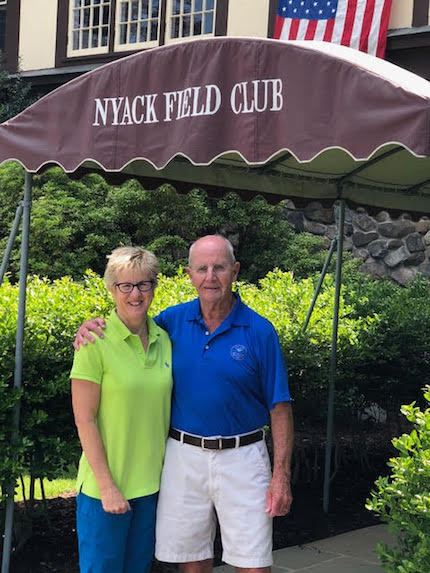 Viant stepped down four years ago. Proof of her enduring fondness for the club is found in her recent decision to buy a home adjacent to the club, and to join as a member.
Current Board Chair Bill Loftus is not surprised by the longevity of Viant’s commitment to the club or her wish, even in retirement, to move closer. “We are a member-run family club,” Loftus proclaims. His twenty years on the board, five as president, cap 50 years a a member. “I started when I was six. My parents chose joining over a family vacation.” One of his three grown children who is local is a member as is his sister. “We are not a country club,” he asserts, “members are responsible for the upkeep of the club. We strive to maintain that dynamic today.” 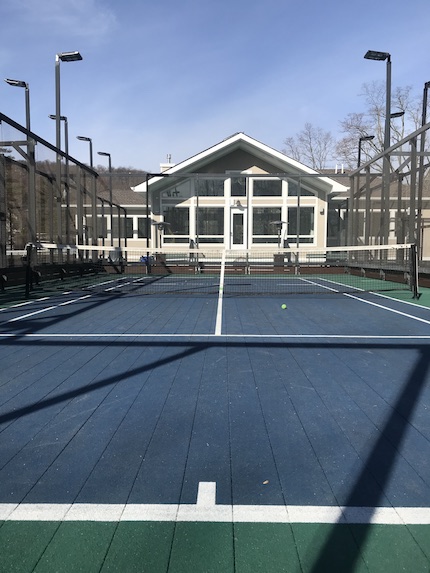 One of Loftis’ proudest achievements is the renovation of the all-purpose building, where members can relax and view the action on the platform tennis courts. In addition to the snack bar, and out door grills where members have their own summer barbecues, the club has contracted with local eatery Rockland Roots who pull up in their food truck to provide meals for social events.
Over the years, The Nyack Field Club has continued to expand their youth and family social activities. There are many seasonal events including their Autumn Pumpkin Festival, Winter Holiday Family gathering, and the “bring on summer” Schools Out Party.  The club also offers a six week all day or half day camp program for children ages three to thirteen. 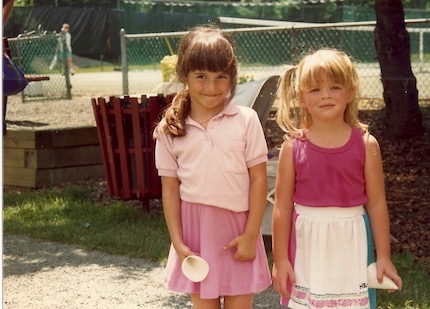 According to past board member Glenn Meyerson, the social aspect is the most meaningful. His two children, Benjamin and Rebecca were active in the club’s camp and the swim team, participating in meets against clubs in Palisades, West Nyack and Nauraushaun in Pearl River. “Our kids would have swim practice during the week and learned to play tennis. Starting at four they stayed in these programs until they were 14 and 15. They made life long friends here,” Meyerson said.
Meyerson, who is a past president of the Nyack Center Board of Directors, spent a combined 22 years on the board of the Field Club with his wife Kathi. “Now, as always our focus is on children and our vibrant summer camp. If somebody asked me what is the single best thing I did for my kids growing up, I’d say it was joining the Nyack Field Club.”
To learn more visit: Nyack Field Club