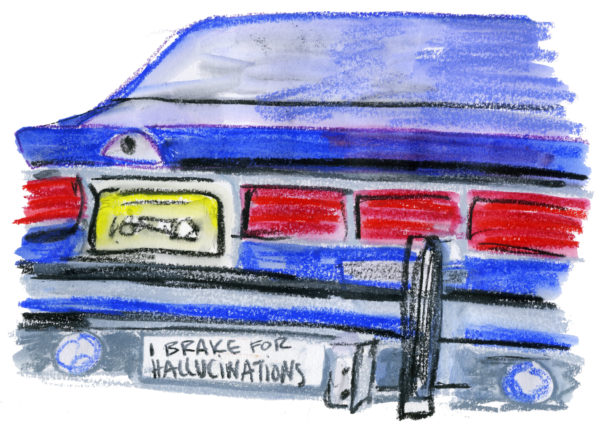 by Emma Caster-Dudzick
The steaming July day was growing cool and the fading sun was shining onto some of the coolest cars I’ve ever seen–sleek, reflective, and expensive. I’m not a car gal, but I can tell you that the ones gracing Main Street, on July 12, for Classic Car Night were definitely “cool cars.” In fact, I was overtaken by the amount of cool as I headed towards the municipal parking lot, where a man at O’Donoghue’s Bar told me I could find his 1979 Chevrolet Caprice Classic Sedan that had been to over 80 Grateful Dead concerts.
Parked in front of Casa Del Sol was a white 1988 Cadillac Fleetwood Superior Hearse called “Creep Show,” with blue flames on the hood and along the side. The back was open and contained a tombstone, spiderwebs, skulls, a coffin (of course), and a demented clown. The owner, Vincent Mocerino, told me to follow the hearse on Facebook!
The most eye-catching car had to be The History Vehicle, a 1986 Chevrolet El Camino, every inch hand-drawn and painted with tiny snapshots from American history: there was Elvis, the Korean War, Betty Grable, M&Ms, Superman, King Kong, the Liberty Bell, Nathan’s Hot Dogs, Clara Barton, Disney World, Frankenstein, Frankenstein’s Bride, President Teddy Roosevelt digging the Panama Canal, not to mention every single President from Washington to Trump, with each image labeled and dated.
As I was jotting all this down, a man behind me said, “Are you allowed to be taking notes?” He was Robert Luczun, the owner of the car. When we shook hands, his friend yelled from a chair by 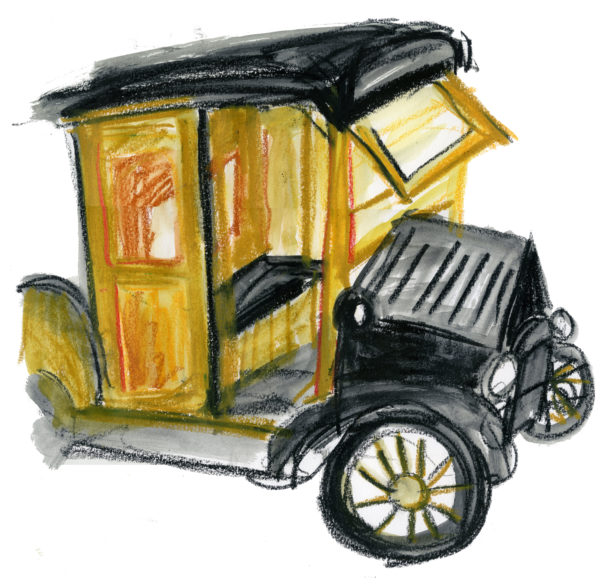 the sidewalk, “She’s not taking notes, she’s writing you a parking ticket!” Luczun said he added all the details. “Two and a half years, eight to ten hours a day, six days a week.” Each one hand drawn, hand painted and airbrushed, takes between an hour and two hours to complete. Luczun taught art for over 30 years, has a son in the military, and uses the car to help raise money for military hospitals. “A car should be doin’ something more than people going ooh, ah, wow.” The car will be featured in the new issue of Ripley’s Believe It or Not in August.
Near The History Vehicle was a car drawing a large crowd of kids, a 1926 Model T Huckster, owned by Bob Vitetta, made mostly of wood and dressed up as a produce cart, with fake fruit in the back and a sign that read “Driftwood Farms.” I asked Vitetta how he picked the name. “The car was in such bad shape when the tow truck dropped it off in front of my house, my wife came out and said, ‘What’s that rotted piece of driftwood in the front yard?’” he said. Vitetta, a smiley, amiable guy, was letting kids climb in and out of the front seat: “I’m always worried they’re gonna climb out of my car and into somebody else’s… I never wanted a car that nice that they couldn’t. Kids are going to remember that, in 30 years they’ll remember: I climbed into an old model T!”
In the municipal parking lot, there was woman in a huge black sun hat and a necklace strung with several rough crystals selling her green convertible Mercedes Benz that had a stuffed toy penguin sitting in the back seat. Everyone looking at it said it was a steal. Nearby, a man was wiping down the rearview window of his Australian-made, four-door Corvette. “There were only about 4,000 of them made, and they don’t make them anymore.” He had a Corvette before, but traded it in for the one he has now. “This is just a little more practical. I have family, so, you know, this is a two-seater.”
I went up and down the rows of cars, and finally found the Grateful Dead car, which I noticed because of the tie-dye seat cushions, and the laminated posters mounted on the driver- and passenger-side windows, telling the story of the car, which I overheard the owner telling his friend he’d typed up. From the poster, I learned that the car’s name is “Billie,” after its old vanity plate: BIL2LAST, a tribute to that car’s original owner, Bill, and the Dead’s final studio album. The car was adorned with many stickers, including “I stop for hallucinations” and “Vulcan Science Academy.” The poster ended with a Grateful Dead quote:

There is no road, no simple highway
Between the dawn and the dark of night
And if you go no one may follow
That path is for your steps alone.

Emma Caster-Dudzick is a writer and artist living in Brooklyn. Her work can be found at ecdart.com. All illustrations by her.