Earth Matters focuses on conservation, sustainability, recycling and healthy living. This weekly series is brought to you by Maria Luisa Boutique, Dying To Bloom, and Strawtown Studio.
If Earth Matters to you, sign up for our mailing list and get the next installment delivered right to your inbox.

So, what’s wrong with that? Plenty, according to Riverkeeper Patrol Boat Captain and Vice President for Advocacy John Lipscomb. He and Lamont-Doherty Earth Observatory (LDEO) Special Research Scientist Dr. Klaus H. Jacob explained why to Earth Matters last week. Both made it clear tha area residents, and anyone who cares about the Hudson River, need to get informed about this fast-tracked project and its alarming proposals in order to head off disaster for the entire estuary.

What’s on the table?

Information about the study has been posted on the USACE website since February 2018, but the public scoping sessions in New York and New Jersey, held from July 9-11, 2018, were announced with scant notice just a few days earlier, in a press release dated July 5. These public meetings were intended to “provide face-to-face time with the study team to facilitate meaningful discussion and input from the community and stakeholders,” according to the USACE presentation slides. 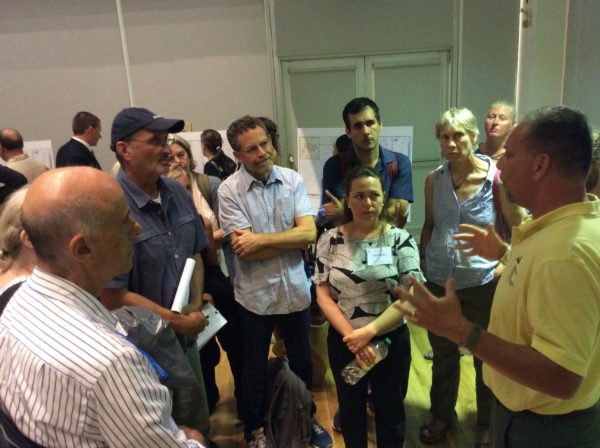 At those sessions, the USACE presented six potential solutions to protect coastal communities in the Hudson River Estuary and New York Harbor from storm-surge flooding. One option proposes doing nothing additional, beyond the local projects already in the works. And one calls for building floodwalls, dunes and levees to protect inhabited areas. But three of the solutions involve in-water storm surge barriers in and around New York Harbor, with limited openings for tidal flow and ship traffic. Similar large barrier projects are functioning in the Netherlands city of Rotterdam and on the Thames River in London. A controversial barrier is under construction to protect Venice, Italy.

The six proposed solutions under consideration by the U.S. Army Corps of Engineers (using their numbering system):

3a. Multiple large barriers, near the Verrazano Bridge, the Arthur Kill, and in Long Island Sound between the Bronx and Queens.

3b.  Barriers around New Jersey’s Hudson River waterfront at Jersey City and Hoboken, along with a barriers blocking Newark Bay and the Passaic and Hackensack Rivers.

4. Several smaller barriers in the region, including one across the Hackensack River (the source of Nyack’s drinking water, by the way).

5.  Perimeter barriers along shorelines only. (This is the only option acceptable to Hudson Riverkeeper).

The in-water barrier proposals—most notably the five-mile-wide barrier blocking the entire Hudson River estuary from the ocean—have local environmental groups up in arms. And they’re racing the clock, too: The public comment period on the six proposed storm surge solutions is awfully slim—a mere 40 days, open only until August 20. The USACE will release a report with one or two “Tentatively Selected Plan(s)” some time this fall. Another comment period, including public meetings, will follow the release of this report. The final report, to be submitted to Congress for funding, might not be ready before 2022, according to a spokesperson for the USACE.

What’s wrong with this picture?

The lack of transparency, poor public outreach, and ultra-short comment period have Riverkeeper’s John Lipscomb feeling less than confident about the USACE’s process. He worries that an environmental study done entirely in-house by the USACE could lead to a number of catastrophic outcomes for the river that he’s been patrolling and protecting for 18 years. “From day one, these offshore barriers would start to restrict the tidal flow, contaminant and sediment transport, and migration of fish,” he said.  “They would impede the tidal ‘respiration’ of the river. We fear that a slow death would be inflicted on the river, and that in time, the barriers would slowly, but surely, strangle the life out of the river as we know it.”

Artist conception of ship channel and surge barrier swing gate, like that proposed for the five-mile NYC harbor storm-surge barrier. Sea level rise could force the surge barriers to remain closed more often than they are open, with dire consequences to the entire Hudson Estuary. Image: CH2M 3D Visualization Studio via Youtube

And, believe it or not, the project’s aims don’t address inevitable sea-level rise. For a reaction to this odd oversight, we spoke to  Piermont resident Dr. Klaus Jacob, the geophysicist who became a New York City legend when he accurately predicted subway and tunnel flooding in Superstorm Sandy. “Barriers are initially effective against storm surges, when they are closed only during storms,” Jacob explained. “But when sea-level rise (SLR) becomes comparable to storm surges, say by at latest 2100, but perhaps as early as the 2050s, then the barriers need to be closed permanently to keep the rising ocean out all the time to prevent permanent flooding by inundation.”

The result? However high you make the barriers, that’s how high the flooding would be inside the barriers, because the Hudson River gets trapped behind them. “In the end, the rivers and the ocean need to equalize to whatever SLR will bring, even if storms on top of it could be kept out,” Jacob said, painting a grim picture of New York City and river communities dealing with overwhelming sea-level rise all at once, instead of gradually. “The $20+ billion to build barriers could more effectively be used for adaptation measures for the SLR scenarios we need to face,” he added.

“Barriers create short-term benefits and delayed long-term liabilities, if not a disastrous, delayed, long-term coastal havoc. They would create intergenerational inequity by protecting us in the short term, reaping benefits for waterfront development for a few decades, while making our children and grandchildren pay the price for our reckless selfish behavior.” — Dr. Klaus H. Jacob, Lamont-Doherty Earth Observatory

Rebuilders: Solutions with Klaus Jacob from Rebuild by Design on Vimeo.

Threats to a slow-healing Hudson

To those who remember the polluted Hudson River of the 1960s and ‘70s, things do seem better today. The water looks cleaner, and there are even a few beaches open for swimming. But looks can be deceiving, said John Lipscomb, who noted that there are far fewer fish in the river now than there were then: “If you’re asking me as a human, ‘How’s the river?’ I’ll say yes, for your purposes it’s gotten better. But if you’re asking as a shad or a herring or a sturgeon, well, it’s really bad.”

And bad will soon become worst if a harbor-wide barrier is forced shut by sea-level rise. The entire Hudson River estuary, its tributaries and wetlands, would become a stagnant, lifeless lake. Migrating species would be just a memory, and the absence of forage fish, like bunker, herring and shad, would affect the Atlantic Ocean fish that rely on them. Other, smaller barrier options would have similar killing effects on tributaries. 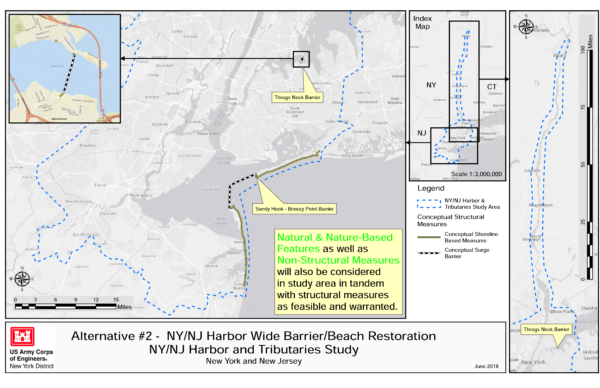 Besides the environmental threats, Lipscomb also pointed out that massive one-shot solutions, like the five-mile and other other in-water barriers, would require large, regular maintenance payments from the hosting states. Modifications for sea level rise—if they are even feasible—would carry a hefty price tag too. And who can prepare for the catastrophic failure of a harbor-wide barrier (“Sometimes nature wins,” Lispcomb said), or “back-flooding” from water trapped behind a barrier during major rainfall-plus-storm-surge events, like 2011’s Hurricanes Irene and Lee?

In light of all this, Riverkeeper says that only the last of the USACE’s six options is even worth considering: Construction of floodwalls, dunes, levees in vulnerable areas. These shoreline-based measures and other local adaptations would protect from both storm surge and sea-level rise, and could be modified as needed over time.

Speak up for the river

Riverkeeper is working on a public information campaign about this process, according to John Lipscomb, who pointed to the barge anchorage victory as an example of government “for the people.” “The Coast Guard behaved really well, extending a six-month public comment period, and collecting over 10,000 responses, almost all of them against the anchorages,” he said, adding that his organization is requesting a comment-period extension from the USACE as well.

But Lipscomb stressed that comments to the USACE need to be made without delay, and just the right way. (Riverkeeper’s legal team has created a template to optimize comment submission.) And Lipscomb has just learned that, because the N.Y. State Department of Environmental Conservation (NYS DEC) is a co-sponsor of the project, it has “veto power” over the solution chosen by the USACE. Thus, all New Yorkers should make sure that NYS DEC Commissioner Basil Seggos also gets a copy of their comments.

“For centuries we’ve dredged, dammed and mechanized this estuary and brought it to its knees,” Lipscomb said. “But after the last 50 years of caring for the Hudson River, we’re at the point where it could start recovering. This is not the time to put a noose around its neck.” 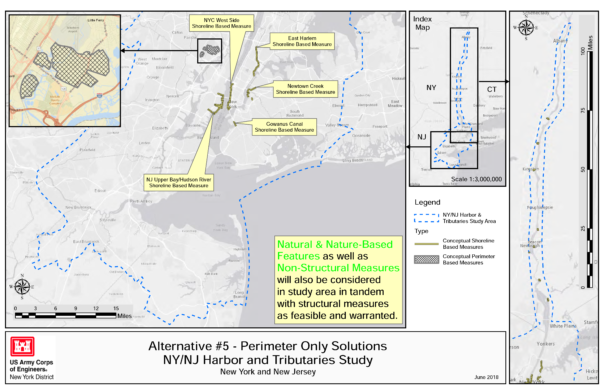 Perimeter-only solutions to protect the NYC Harbor area from storm surge. Some of these projects, like the “Big U,” are already in the design stage. Image: USACE 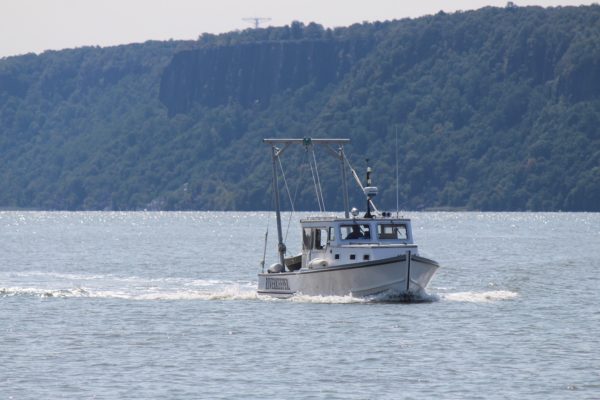