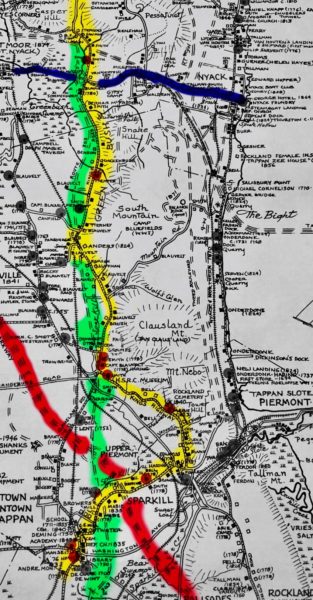 1854 map showing the Kings Highway in yellow, from Tappan to Central Nyack. Notice how it contours follows Sparkill Creek from Tappan and then curves around Clausland Mountain. Route 59 is shown in blue, running right to left. To position the old roads with more familiar roads of today, Route 303 is shown in green and the Palisades Parkway in red.

The Eisenhower system of interstate highways was authorized in 1956. But Ike wasn’t the first person to recognize that improved transportation between American towns would fuel commercial growth. In the early 1700s, the British Crown mandated that towns build and maintain roads to other towns. The expedient solution in most cases was to widen the existing Native American trails (the original expressway) to allow wagon travel. The result was a network of roads labeled the Kings Highway. In Rockland County, Colonial Kings Highways were neither the first nor last thruway built.

In Rockland County, arteries of Kings Highways ran north and south to Albany. A mountainous highway ran north through the Ramapo pass at Suffern. The river route started in Paulus Hook, New Jersey and went through Tappan, Sparkill, Central Nyack, Haverstraw, and Stony Point. Parts of the highway still exist, although it is no longer contiguous. Near Bear Mountain in Harriman State Park, rocky Kings Highway wagon trails are now hiking trails.

The short stretch from Sparkill to Central Nyack has all the narrow and winding marks of a colonial road following the easiest path through local geography. Skirting the tall cliffs of Mount Nebo and Clausland Mountain on the east, the road follows relatively flat land bordering the once impassable Greenbush swamp (through which Route 303 now runs).
On this stretch are colonial homes, a university, 17th and 18th century cemeteries, a waterfall, two arts centers, stables, an old fairgrounds and racetrack, as well as modern homes and businesses. The road is actually still known as Kings Highway from Sparkill to Orangeburg, where it merges briefly with Route 303.

Look for upcoming Nyack People and Places articles that will explore other local Kings Highway segments.

How to Explore the Kings Highway

The best way to experience the highway is by bicycle. There are many natural and historical sites with lots of photo opportunities. Biking is the right pace and allows for frequent stops just about anywhere, except in Rockland Cemetery, where biking is not allowed. Country vistas and old homes from many eras populate Kings Highway.
See also Exploring Kings Highway: Cycling Through Rockland