Earth Matters focuses on conservation, sustainability, recycling and healthy living. This weekly series is brought to you by Maria Luisa Boutique, Dying to Bloom, and Strawtown Studio
If Earth Matters to you, sign up for our mailing list and get
the next installment delivered right to your inbox.

Summer hasn’t even officially begun (that would be tomorrow), and our region has already endured a number of bright, broiling “ozone alert” days, the latest just this week.

You can’t smell it, or taste it, but the grey-brown haze that forms under high heat, intense sunlight, and lots of traffic, is the visible sign of ground-level ozone (O3)—the “pollutant of concern” in Air Quality Advisories—that can make everybody sick, and sick people sicker:

Although all individuals may be affected by ozone exposure, some people may be more sensitive than others. Young children, the elderly, people with pre-existing lung disease such as asthma and people with pre-existing heart disease or high blood pressure may be more seriously affected during an ozone advisory. It is very important that these individuals reduce their exposure during an advisory and limit all outdoor exercise and physical exertion when ozone levels are elevated. It is helpful to remain in an air-conditioned location. (Rockland County Department of Health, 6-18-18)

Over the past year, even more negative health effects—including premature death—have been found in those exposed to ground-level ozone. Efforts to reduce ozone-producing tailpipe emissions kicked into high gear during the Obama presidency. Now, they are under sustained assault by the Trump Administration, which is on a mission to bring fuel economy and tailpipe emissions standards for fossil-fuel vehicles back decades, and to reduce or delay fines for automakers who fail to meet them. 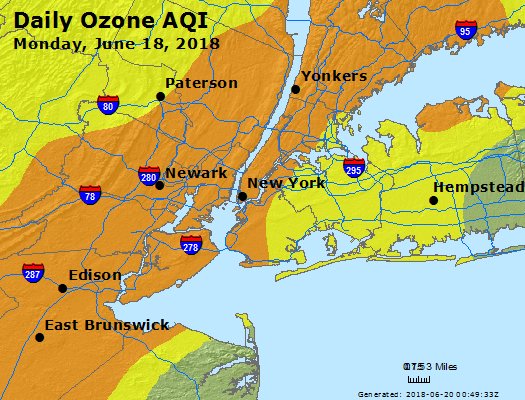 Peak ozone on June 18, 2018 for the New York metro area. The orange color indicates that conditions should be considered hazardous for those with pre-existing health conditions, like asthma or heart disease. Image from US EPA “Air Now” maps.

So here’s the revealing interview with Lamont-Doherty Earth Observatory scientist Benjamin Bostick that we published a year ago because, until we’ve wised up enough to say bye-bye to the internal combustion engine in favor of electric vehicles powered by clean energy, it looks like ground-level ozone (and the harm it can cause) is here to stay.

But, wait a minute. Isn’t the ozone layer the stratospheric sunscreen that protects us all from frying to a crisp in the sun’s harmful rays? Don’t we worry about “holes” in it that put us at risk? This advisory makes it sound like ozone is a bad guy, not a good guy. What gives?

To get the lowdown on ozone, we called Dr. Benjamin Bostick, professor of environmental geochemistry at the Lamont-Doherty Earth Observatory in Palisades, NY. He cleared up the smog around this two-faced molecule.

What, exactly, is ozone?

Ozone (O3) is a form of oxygen with an extra oxygen atom—one more than normal oxygen (O2). This makes it more unstable and more chemically reactive than oxygen. It can be useful, but it can also be toxic. 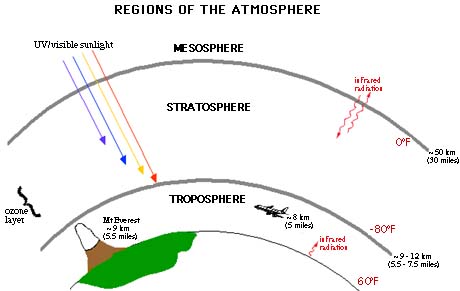 I thought ozone was our friend. Is it this the same ozone that advisories warn us about?

Up there in the stratosphere, ozone acts like earth’s sunscreen. Because it’s unstable, it breaks down and re-forms by absorbing light, thus protecting us from those nasty ultraviolet (UV) rays.

Down here in the troposphere, where we live, ground-level ozone is a contaminant, causing oxidation. That means it can kill stuff, which makes it good for drinking water treatment, for instance. But even a low concentration of ozone in our air, which is reasonably common, can have a number of adverse health effects. 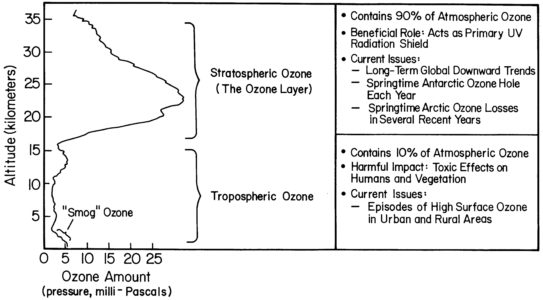 So, does the ozone from up there come down here on hot days? Is that the problem? If not, where does it come from?

The stratosphere (six-30 miles up) is very cold and not dense, while our troposphere (from earth to the stratosphere) is dense and warm. There’s very little transfer between these two layers.

Down here, we make our own ozone, especially on long, hot, sunny days. The main culprit is tailpipe emissions from fossil-fuel vehicles. The nitrogen oxides (NOx) in these emissions are chemically converted, with heat, sunlight and atmospheric oxygen, into ozone, a harmful component of photochemical smog. By late afternoon, ground-level ozone concentrations have already been rising for hours, which is why advisories usually warn us most strongly about these times.

Ozone degrades over time, and generation falls off overnight. With the morning rush hour, the cycle starts again. 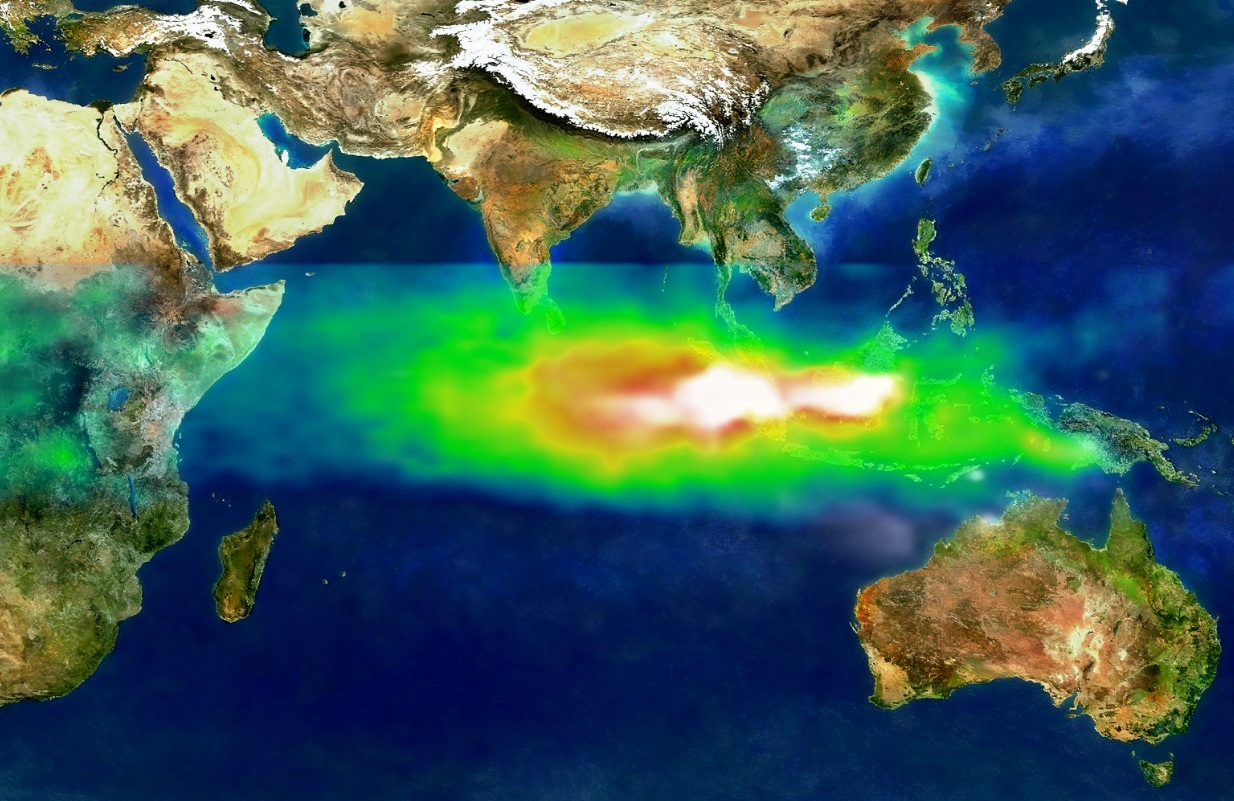 Tropospheric ozone on the move over the Indian Ocean in 1997, as tracked by a NASA satellite. Green, yellow, and red pixels represent increasing amounts of tropospheric ozone. Image: NASA

I read somewhere that emissions from distant sources can cause this bad ozone. What does that mean? 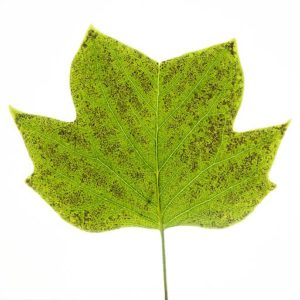 We have to remember that tropospheric ozone is a secondary contaminant, formed photochemically after nitrogen oxides are emitted from tailpipes on a warm, sunny day. And ozone doesn’t necessarily stay in one place.

In bowl-like landscapes, like Los Angeles or Phoenix, a cloud of brownish-yellow ozone smog will stay put. In our area, which is not a bowl, we share our morning rush-hour ozone with swaths of Connecticut and Massachusetts, where it endangers people, plants and agriculture.

So, should I wear a mask when I go out? How does this ozone affect me adversely? What could happen?

A mask won’t help with ozone. Statistically rare events are more likely to happen on “ozone alert” days to susceptible people, whose problems can be exacerbated (see box). 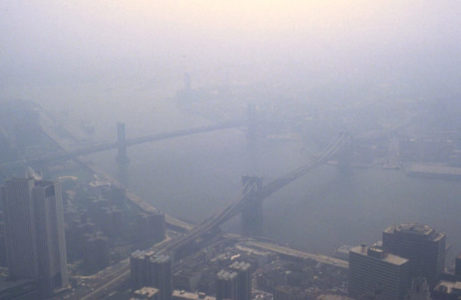 Ozone-laden smog over lower Manhattan in 1988, from the World Trade Center. Photo: US Centers for Disease Control

What can we, as individuals and all together, do about ground-level ozone pollution?

Limiting NOx tailpipe emissions is the big thing. We need low-nitrogen fuels, or no fossil fuels at all. It’s a difficult problem to address here, where we have a big concentration of cars and of miles driven and not enough public transportation.

The US Environmental Protection Agency tells us that ground-level ozone exposure can: 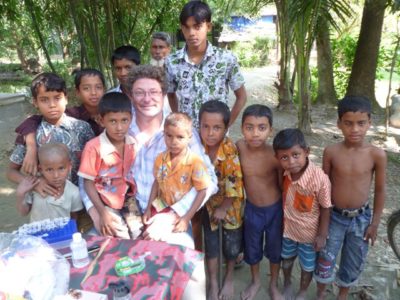 Prof. Benjamin Bostick (seated) at his field station in Bangladesh in 2011, on a project to find safe drinking water in rural areas. Photo courtesy US Dept. of Health and Human Services: National Institute of Environmental Health Sciences

Rockland County’s lone air-quality monitoring station is located in the Orchards of Concklin, a farm in Pomona. In a letter dated 4/22/18, Orangetown Supervisor Chris Day asked that the DEC install another air quality monitoring station along the busy Route 303 corridor (which includes the Aluf Plastics factory, a source of longstanding odor complaints). His request was supported by Rockland’s New York State Senator David Carlucci.