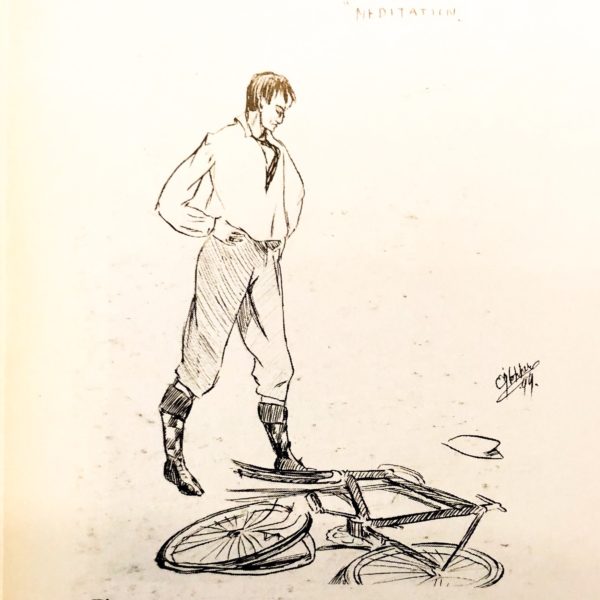 by Mike Hays
100 years before the advent of shared city bikes, Nyack had its own spin on the concept called the Nyack Bike. No, the bikes weren’t shared using mobile apps. But they were made in Nyack. This was around the same time that Edward Hopper was a teenage biking enthusiast, living in the village. Is it possible Hopper rode a Nyack Bike?

The economy was in shambles in the late 1890s, but bike sales boomed. The bicycle was the vanguard technology of its time. Bike ownership mushroomed because technology changed quickly after the so-called “safety bike” was introduced to replace the dangerous “penny farthing” bike. The safety bike was similar to our bikes of today, with spoke wheels (with wooden rims) of equal size, rubber tires, gears, saddle and handlebars. Coaster brakes were introduced in the mid 1890s.

Nyack had its own bike start-up. In 1897, when Edward Hopper was 15, the Nuttall Manufacturing Company opened in Nyack. The Rockland County Journal called John Nuttall of New York City the best nickel-plater in the United States. His plant, located near the train station in Nyack, focused on nickel-plating and enameling. One of their first large jobs was nickel-plating 30,000 bike handlebars.
Around the same time, the Nyack Bike appeared. It is unclear how the bike got its name or where it was made. Was it built by Nuttall? Perhaps. If so, the brand was soon sold to a larger company because it appears in the 1901 Spaulding Catalog.

The Nyack bikes were advertised as “easy running, strong, handsome bicycles of marked excellence and finish.” Men’s and women’s bikes were $25.00 (coaster brakes were $5 extra) in 20-, 24- and 26-inch frames painted blue with a red band. The brand lasted until 1912. Nyack Bikes are still highly collectible among old bike aficionados.

The Hopper Bike at the Edward Hopper House

The provenance of the bike is solid, having been established by local historian Win Perry. The bike is in a sorry state, though. The wheels are bent, it is rusted; but the basic features are relatively intact, including a curved handlebar (although positioned backwards) and “rat-trap” foot cages on the pedals. It has a metal insignia in the correct place on the front handlebar tube. 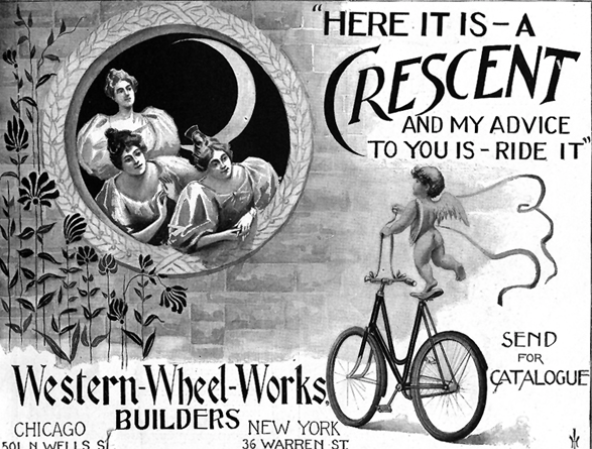 Alas, the bike is not a Nyack Bike. It’s a #9 model Crescent Wheel Works bike made in Chicago. Crescent was one of the earliest large-scale bicycle manufacturing facilities, turning out 57,000 bikes in 1895. The company was shipping five boxcar loads a week to their distributor in New York City. Crescent bikes were more expensive than Nyack bikes, usually running in the $40-$100 range. The Racer model, very similar to Edward Hopper’s #9 model looks to be a lightweight entry into the emerging bike racing market.

Edward Hopper as a Cyclist 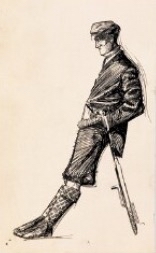 Man leaning on a bike

We can only guess to what extent Edward Hopper cycled. Arthayer Sanborn, a Nyack Baptist minister, family friend and rescuer of many Hopper sketches, noted that, “As he walked through the boat yards, wandered along the Hudson or rode his bicycle through the county, his eyes were gazing on the scenes that would be imprinted indelibly on his mind.”
Hopper was built like a cyclist, tall and thin. He was called “Grasshopper” in grade school. In her biography of Hopper, Gail Levin writes that Hopper depicted himself in his early sketches as homely, skinny, and ungraceful. However, he was clearly athletic. A sketch in the Edward Hopper House Museum depicts his attic at home where he liked to draw. Highlighted in the sketch are his wooden rowing machine and punching bag. Another early sketch shows him boxing with an overweight friend. So it can be inferred that he was an active person when not sketching.
Bikes appear in many of the sketches the young painter made before he left Nyack. A sketch he labeled Meditation: Ten Miles from Home shows Hopper himself contemplating a flat tire. He sketched the interior of a bike shop, a woman racing down a hill, a male bike racer, and a man leaning against a bike. Clearly, cycling was an important part of his teenage years in the village. 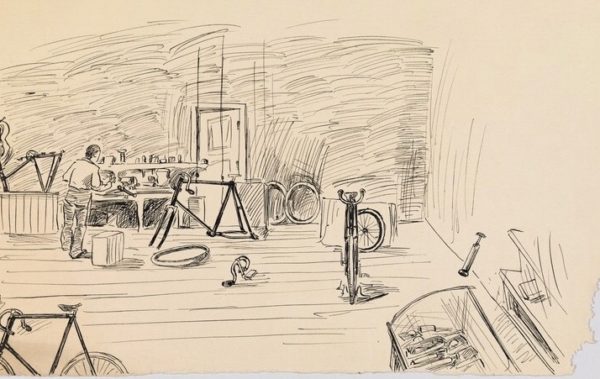 Man in a bike shop. Bike in lower left is similar to Hopper’s bike. Sketch is in the 1895-99 timer period.

Did Hopper ride the Nyack Bike?
Okay, it is impossible to say. But given his interest in cycling, he must have been aware of the Nyack Bike, especially if it was, in fact, made in the village. His father was a downtown merchant so he may have known the owners of the new factory. Did he get his Crescent bike before the age of 15 when the Nuttall factory opened? Did one of his friends own a Nyack Bike? Did local bike shops, of which there were several in Nyack at the time, sell the Nyack Bike?
Whether Hopper did or did not, the image is nice: Our famous native son riding though the village on a locally made bike.
Sources: Edward Hopper: An Intimate Biography, Gail Levin
Photo Credits: Hopper Sketches: Courtesy of the Whitney Museum of American Art, New York. The Spalding brochure is located in the Nyack Library History section.

Still Cycling After All These Years

Sometime in 2019, the Mario M. Cuomo Tappan Zee Bridge will add a Shared Use Path for pedestrians and bicyclists. If it proves to be 1/10 as popular as the Walkway Over The Hudson, a similar attraction in Poughkeepsie, Nyack and Tarrytown will receive 50,000 incremental visitors a year. Some will be riding bicycles. Everyone will be walking at one time or another. 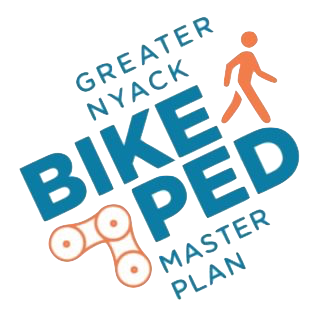 Who will be riding those bicycles? Some will be “road warrior” serious cyclists passing through. However, the majority are likely to be recreational cyclists — moms & dads with kids, young couples on hybrids, and Nyack-area neighbors connecting to local destinations. For the first time bicycle commuting will be possible to the Tarrytown Metro North station; to work in Westchester; and for those living east to ride to jobs, restaurants and shops west of the Hudson, too.
When the SUP is open and the Village of Nyack’s Transportation Alternative Program (TAP) project completes a new South Franklin Bike Path, residents will be able to ride about seven miles from downtown Nyack into Tarrytown without having to share the road with cars.
The Greater Nyack Bike/Walk Master Plan (GNBWMP), a joint effort by the three Nyack river villages and the Nyack School District, funded by the New NY Bridge Community Benefits Fund, is now underway. Transportation design consultants Fitzgerald & Halliday are inventorying current bike and pedestrian amenities, surveying residents about their concerns and current bicycle/pedestrian behaviors, and meeting with village, town and country planners to marry future bike/ped plans with existing master plans. To learn more about this project and join a mailing list to be in the loop for future meetings, visit BikeWalkGreaterNyack.com.