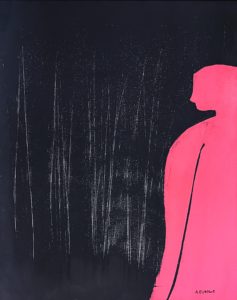 Art—painting—is like life: abstract, realistic or symbolic, captured fragments of what could be a full conversation, or perhaps just the wisps of one. Sometimes you want the dialog, and sometimes the mystery.
Why someone translates their own earthly moment into painting is probably best–maybe only–answered by a bigger force. But the reason doesn’t matter; what matters is the fact that the artist is there, that there  is compulsion to paint, that hands and fingers move to the rhythm of creating.
It may be—it often is—that the creation itself is not noteworthy to others, even to the artist. Yet, surely, just as we speak and write and draw and make facial expressions and do anything else human, painting needs no justification for its being.
In other times, perhaps ages beyond, what was dismissed may be seen in different light, and its language is then understood. So, work produced and thrown in a drawer in one era may, after decades of dust, prove worth another look. Or it may be summarily dismissed.
Artwork has its relative place anywhere, any time because it is the voice of someone, whether we want to listen, to tolerate, to ignore. But it is still there, as is every sentence uttered, every expression made.
We are all creative, for we are human. Some speak eloquently. Some draw. Some make things. Some hold others’ hands when necessary. Some create by a nod of approval, for that is engendering affirmation, and so creating a path forward. And as with a painting, it may be years later that the gift is recognized.
The writer is a retired newspaperman. ahgunther@yahoo.com. This post was originally published on his blog, thecolumrule.com.
In this article:Art Gunther, painting