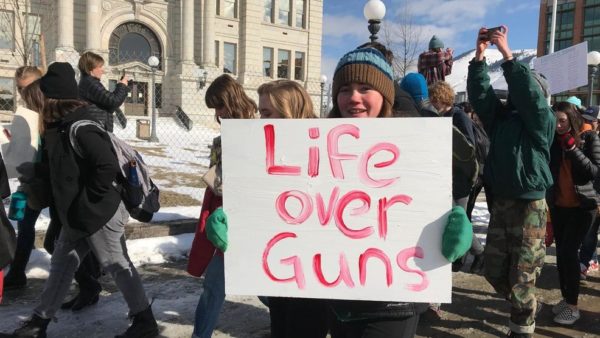 by Jillian Sharp
With more than half of the student body in attendance, it is easy to say that Nyack High School’s participation in National School Walkout Day, on March 15, was a success. Nyack students joined thousands of schools nationwide mourning the lives lost in Parkland, FL and protesting gun violence and the lack of gun control laws in the federal government. As the next generation, we needed to make our voices heard, and the walkout was the most peaceful, yet efficient way we could have done so.
The walkout was planned and run by students, including members of the newly formed Social Justice Club and valedictorian Lucy Jackson. “I think it’s really exciting that so many people came out in the cold and felt that this is something they were called to do, and that we could stand in unity, and I think that’s really inspiring. Things like this start with the youth,” Jackson said.
Besides inspiring students to speak up, the walkout also inspired the adults of the community as well. Nyack Mayor Don Hammond attended the walkout alongside the students. “It’s amazing that this is all student led; and it’s really taken on an energy, and to see how many kids are here and the passion they have. These kids talk about how it’s an important time for them to protest against gun violence and change in our country, and it’s just really exciting for me to hear that,” Hammond said.
When asked about the students of Nyack walking out in peaceful protest, Superintendent Dr. James Montesano said he is “extraordinarily proud of our students.” He added: “The respectful way that the students came together tells me they recognize the opportunity that’s in front of them, and that’s about maturity. Our whole goal is to have all of our students enter society and contribute to our democracy, which requires being an active voter and taking position.”