In the late 19th century,  New York City’s leisure class re-made Nyack into a summer resort. The village population doubled in the summer as trains, steamboats, and a ferry made getting here easy.
Imagine the summer in the city without air-conditioning and with frequent outbreaks of malaria and cholera. No wonder those who could afford it found the fresh breezes off the Hudson River in Nyack appealing.

Nyack: Gem of the Hudson 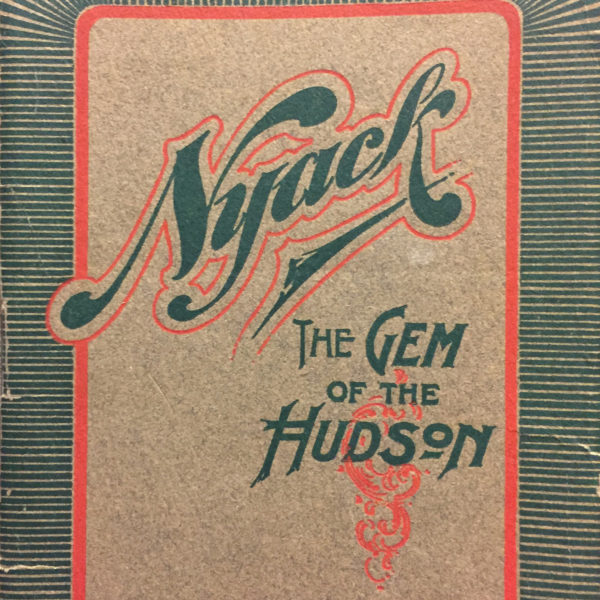 The cover of an early advertising brochure

In an article about summer resorts on the Hudson River, the July 12, 1873 New York Daily Tribune praised Nyack’s hillside river vistas and quiet, country lanes. “Its healthfulness is common talk and its quiet comforts are greatly appreciated.” The paper also noted that a new reservoir had. Just been built off Main Street to supply fresh water to the residents. In another article, the New York Daily Graphic in 1889 named Nyack the “Naples of America” and “gem of the Hudson” saying that it was “one continuous round of pleasure and contentment.”
The “one percent” crowd of the late 19th century was able to build large mansions and estates that still dominate the riverfront in Upper Nyack. For everyone else, a number of hotels were built: first near the ferry landing, such as the St. George (still standing) on Burd Street, and then near the train station where the Opera House held sway. 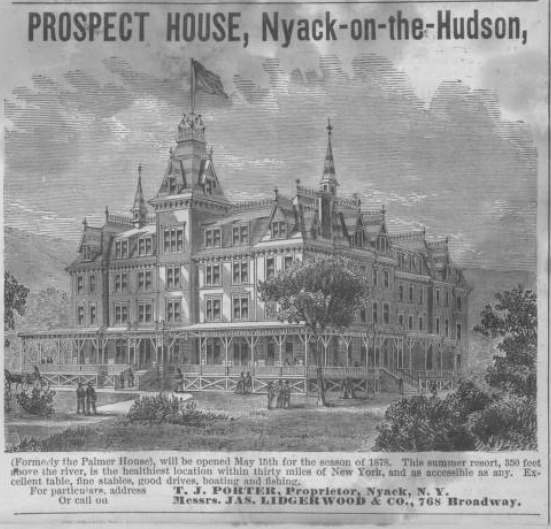 Advertisement for the Prospect house. (Courtesy of the Nyack Library)

Larger resorts were built on sites with scenic vistas. The most famous was the stunning Prospect House built in 1876, high up on South Mountain on Highland Avenue where Nyack College is now located. It was a four-story wooden building with a mansard roof and wrap-around porch. The dining room could sit 225. A stable and a bowling alley were on the grounds. Then-President Grover Cleveland stayed at the Prospect House on several occasions.
In 1862, the Female Institute of South Nyack became the Tappan Zee House, renting rooms during summers for up to 175 guests. It advertised fresh air, freedom from mosquitoes and malaria, beaches, boating, and on-site vegetable gardens and fresh milk.

The village’s earliest summer resorts were located in downtown Nyack on Main Street. Theodore Gregory opened The Eastern House (so named because its river view was to the east) in 1831. It was then a low, flat structure for about 70 guests. Abram Smith purchased the lodging in 1849 and renamed it the Pavilion Hotel.
The family-run lodging expanded after the Civil War into a large four-story structure with a tall spire. Later the “Pavilion Hotel” became known simply as “The Pavilion” for marketing purposes; newspaper clippings from the time explain that, “families who would go into the country for the summer would ‘shudder’ at the word ‘hotel.’” 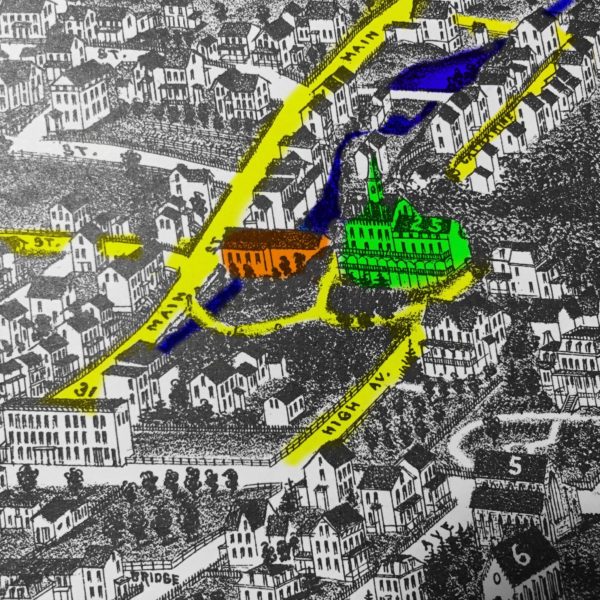 From the 1884 Burleigh Lithographic map of Nyack on Hudson. The Pavilion is colored in green with the sawmill on the left (colored orange) straddling the Nyack Brook. The streets are colored yellow. The entrance to the Pavilion is off Main Street. Mill Street is the street to the left of the sawmill. Catherine Street stops just above the Pavilion.

The Pavilion was located on an imposing hill above Main Street with its back to the end of Catherine Street, just above an old sawmill on the Nyack Brook. A driveway connected the property to Main Street, and it circled the building.
Like The Eastern House, The Pavilion was known for its views east looking out over the Hudson River. This view was often enjoyed from the perch of rocking chairs on The Pavilion’s curving, wrap-around porch. To top it off, ducks swam on the Nyack Brook just below the hotel. It would have had its own large dining and sitting rooms and, like most resorts, a billiard room.
By the 20th century, tourists had moved on to other locations. The resort hotels disappeared one by one. A spectacular fire destroyed the Prospect House on South Mountain in 1898. The Pavilion remained a hotel for a while longer, but by 1910 it was known as an Italian Tenement Hotel (or boarding house). By 1919, it was vacant and burned down shortly after that.

The Pavilion has been mostly forgotten. The extremely rich digital archives of Nyack Library’s History Department show no photos of it. Our only image of the hotel today is found in the 1884 Burleigh lithograph of Nyack on the Hudson.
Part of the old circular driveway was absorbed into Catherine Street, which was extended down the hill. A semi-hidden, one-lane entrance to Catherine Street tucked between the Communal KitchenSocial and a public parking lot may be a remnant of the hotel entrance.
The rocky flow of the Nyack Brook running alongside Main Street and the majestic vista of the Hudson River from a hill are all that is left from the Pavilion, the once quiet summer haven in downtown Nyack.
See also:

Photos: Lithograph of Prospect House Courtesy of the Nyack Library

Nyack People & Places, a weekly series that features photos and profiles of citizens and scenes near Nyack, NY, is brought to you by HRHCare and  Weld Realty.
In this article:hotels, Hudson River, Nyack, Nyack History, resorts