We all know that Reading Is Fundamental.
It also can be the cure to recidivism. 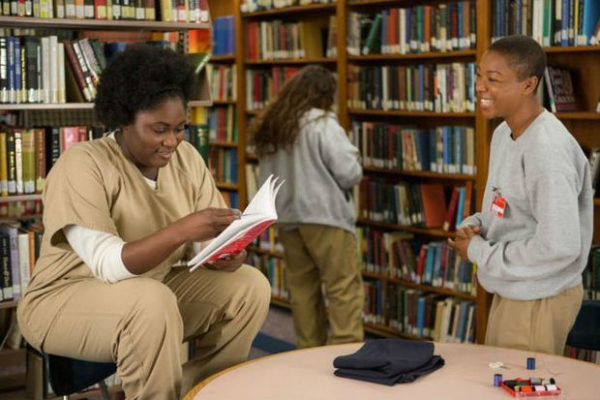 On Tuesday evenings, you can find me in the Rockland County Jail. As Coordinator of Nyack Center’s Family Connections program, I have been entrusted with the humbling responsibility of facilitating a weekly support group with female inmates. The discussion topics vary each week. Sometimes the women need to rant about the system, a way to express solidarity in being locked up. Sometimes they express anxieties about where they will live when they are released, who will take care of their children, or how they will stay clean. Sometimes we read and discuss poetry or news. Sometimes we do writing exercises. Sometimes we laugh a lot, and sometimes we share deeply and emotionally. I miss the women in the group when they are released, though I am happy and hopeful to see them go. They teach me so much in the brief time that we have together. The honesty and support that suffuses the sessions is inspiring, and I have come to think of these women as some of my favorite people.
The women who I work with are some of the 1.2 million women currently under the supervision of the criminal justice system, according to Sentencing Project data. Eighty percent of the women are imprisoned for non–violent crimes, such as shoplifting, prostitution, drug-related convictions, and fraud. Of the women convicted of violent crimes, the vast majority were convicted for defending themselves or their children from abuse. Many of these women had primary custody of their children before going to jail. When mothers find themselves in the criminal justice system, the Nyack Center’s Family Connections program serves to provide support to these women and their families and to connect them to resources in the county. Support comes in many forms, from helping a woman find a place to live when she’s released to procuring a birthday card for her son. Incarcerated mothers have an infinitely diverse range of life stories, futures, vulnerabilities, strengths and support needs.
But there is one universal request that these women have during their incarceration: books.

Family Connections supports families living in Rockland County who are separated due to the incarceration of a parent. The program provides professional and peer support, education and link to vital community resources to parents incarcerated in the Rockland County Correctional Facility as well as to their children and families. The various programs include: a weekly parent education support group for mothers and pregnant women incarcerated; a group for incarcerated fathers; pre-release case managements services to educate incarcerated parents about their role with their children; and post-release case management services to assist newly released men and women to forge healthy, developmentally appropriate bonds with their children as they transition into a new life.
I am proposing the creation of a sustaining fund for books to be purchased for inmates at Rockland County Jail. With your sustaining support of $5 or $10 per month, each woman would receive at least one book to read per month. To contribute to this book fund, please visit  NyackCenter.org and click on the “donate” button. Or, you can send a check to the Nyack Center (58 Depew Ave, Nyack, NY 10960). Please specify on your check or on the website that your donation is for the Family Connections book program. Thank you for your support. — Jennifer Mancuso

Currently, there is not a library at the Rockland County Jail. The jail is not required by law to have a library, and in the past, when the Rockland County Jail did have a law library, inmates made a habit of ripping out the pages that pertained to their cases, thus ruining the books. Inmates also used books to pass notes and other “contraband” to one another.  Books were deemed too dangerous or too vulnerable for practical use, and they were neglected, and ultimately revoked. Who could understand the fate of jail library books better than these incarcerated mothers?
The policy at the Rockland County jail, in accordance with the guidelines at most county jails in the state, is that inmates can only receive books if they are paperback and sent directly from an approved bookseller, such as Amazon or Barnes and Noble. Further, they are not allowed to share books or accept books as a gift from the outside. Despite their policy on books, many jails in the state have introduced tablets as a more modern means of connecting inmates with literature and education.
Dutchess and Albany counties have already successfully implemented tablet programs in their jails. They report that corrections officers like the tablets because they keep inmates occupied, thus lessening tensions and reducing violent incidents. Tablets can also be used as incentives for good behavior, and inmates are encouraged to download free e-books and even take educational classes on the tablets.
There is an interest in the tablet program in Rockland County. But until such a plan is realized, the incarcerated women in Rockland will be left with limited options for accessing a book. If they can’t afford to buy books for themselves from Amazon or Barnes & Noble, then they don’t get books.
Almost all of the women I work with are poor. Most are too poor to afford legal counsel and many are in jail without a conviction simply because they couldn’t scrape together enough money for bail. When there isn’t enough money to purchase food and clothing upon release, then there certainly won’t be enough money to shop on Barnes & Noble’s website. But books are not a luxury. Books are a necessity. A stimulated mind is an inmate’s best defense against recidivism.
For women in prison–and mothers especially–education is vital. Two out of three women in prison have at least one child under age 18. Patricia is one of these women. She was raped by her father at age 15, and then she gave birth to a son who was conceived during that rape. Her son is disabled and deformed, and she did not have the heart to give him up for adoption. She knew that no one would love him the way that she could. Patricia is incarcerated for failure to pay child support. Basically, she is in jail for being poor. All Patricia has ever asked for was a book, but her family cannot afford to buy her books from Amazon or Barnes and Noble.  Patricia has kindness and warmth and a radiant love that she passes on to her son and her family. But, without education, Patricia will struggle to regain control of her life.
The Nyack Center, many local book groups and members of Grace Episcopal Church in Nyack have all recognized that books change lives, and they have fulfilled “wish lists” by purchasing lists of books from Amazon and sending them directly to the inmates.

Jennifer Mancuso is the Coordinator of the Nyack Center’s Family  Connections program, which provides support to incarcerated women in the Rockland County jail. She is a resident of Nyack and a committed advocate for prison reform and restorative justice.