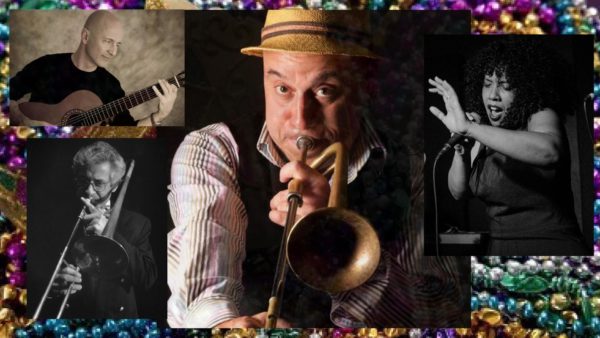 by Dan Cohen
Mardi Gras was last Tuesday, Feb 13. And the unlikely spot to celebrate that swingingest, funkiest, most (okay, 2nd most) American of holidays was at Nyack Center in good ol downtown Nyack, NY.  Sponsored by ArtsRock, the broad-ranging arts performance organization headed by WQXR’s Elliott Forrest, the bon temps really rouleed.
Mardi Gras celebrations in the Big Apple have always felt sort of forced to me. I feel like an emotional tourist in my beads and sparkly hat, nodding along to a zydeco soundtrack while gym rats make out, oblivious, and bond traders discuss their squash game in other, darker corners. A dumbshow for the uninitiated who neither know nor care about the music. And I care about the music. I love New Orleans music. It is such an identifiable, swinging, American beat. I got into zydeco in my teens–Clifton Chenier, Buckwheat Zydeco, Beausoleil, and many others led me to discover the riches of Allen Toussaint and Dr. John and the legendary Meters. I’m no expert, surely, but I know what I like and I like that New Orleans sound.
But then I went to the Mardi Gras celebration at Nyack Center, and it wasn’t like that at all. I’d been deceived by my own prejudices, my own small neuroses. I saw friends, reconnected with acquaintances with a big handshake or shouted hello, danced the night away and came out feeling one with the universe, that all men are brothers, all women sisters, and we’re all in this together, and zydeco music may very well be the answer to a host of pressing contemporary issues from immigration to parking. That’s what this music can do. It’s like American samba in the sense that, eight to eighty, in perfect health or wheelchair bound, anyone can (and will!) dance to it. They sure did Saturday night at Nyack Center.
The music was coordinated by the estimable Steven Bernstein, slide trumpeter extraordinaire and Nyack resident. Bernstein has travelled the world playing with various bands, including Sexmob and Millenial Territory Orchestra, and so perhaps unsurprisingly made Nyack Center feel like a cross between Carnegie Hall and Tipitina’s, the legendary NOLA venue that gave the Meters and countless others their start. Bernstein has spent the last several years collaborating with Henry Butler, a New Orleans native whose heavy handed yet light-fingered style on the piano is the very definition of New Orleans playing; their album, Viper’s Drag, is a  primer on the many sinuous sides of New Orleans’ musical soul, from hot jazz to a signature slow-cooked, lazy funk. “It’s been such a privilege playing with Henry. He’s really a national treasure, a true virtuoso. And he trained as a singer!”, Bernstein reported. “I wanted to try to capture some of that deep stuff, and still keep it loose. With one rehearsal! Luckily, we had a great band.”
Bernstein’s band was comprised of Nyack area locals and old pros, including Eric Lawrence on baritone sax and Mark Sganga and Jeff Doctorow on guitar, aided by the estimably funky rhythm section of Jonathan Peretz on drums and Sue on bass. They played with the loose sort of abandon that is the hallmark of New Orleans style, and of Bernstein’s as well.
The event was a benefit for ArtsRock, an arts organization headed by the Elliott Forrest, a personality at WQXR and impresario about town. ArtsRock has sponsored everything from classical brass quintets to talks with Alec Baldwin and the late, great Jonathan Demme. There is something wonderfully catholic in ArtsRock’s approach, an approach that is somehow to my mind also reflective of Nyack, and of the evening’s event. We’re not here to judge but enthuse. It’s all good. Vocalist and Nyack native Jessi Olsen brought her stellar pipes to many of the numbers and seemed to get better and better as the evening went on, wailing fierce and furious on Josephine, a Grateful Dead song that is itself a cover of an old New Orleans rag. And the band played on.
The incredible and authentic food was supplied by Nyack Gourmet. Heaping plates of beans and rice, an amusingly spiced gumbo, and a citrusy IPA with a distinctive kick. All of which is to say, it was a magical evening. I ran into old friends, old enemies, but no matter. Everyone is equal on the dancefloor. Maybe it was the fact that seats were few and far between. But it’s the kind of music that insists on movement, and while merely swaying in time may seem pedestrian, it was more than enough last Saturday, when for all and sundry, eight to eighty, it was both classic Nyack and bon temps roule. And I finally got over my silly notion that a ‘real’ Mardi Gras celebration can’t be had outside of New Orleans. Nyack Center is good enough for me. ArtsRock hit a home run.
Missed the Saturday dance? Too bad. Heard they crowded the floor? They did, they really did! But the good news is the band’ll be back next year, if Bernstein’s sign-off is to be believed, so…Y’all come back now, hear?