by Mike Hays
One hundred years ago, Nyack experienced one of its coldest winters ever. December 1917 was already cold before December 30 when the temperature hovered all day at zero. By New Years Eve, the temperature had fallen to minus 16 in what weather people of the day called an “anti-cyclone.” 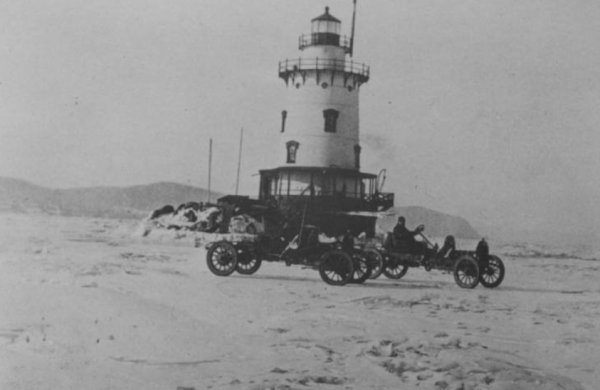 Two stripped down automobiles on the Hudson River. The Hook Mountain Light (long since destroyed) is just behind them.

By January 6 the Hudson River had frozen solid to the depth of 12 inches. Ferries had already stopped running between Tarrytown and Nyack, as they did most winters. Did this stop people from crossing over to Westchester? Absolutely not. 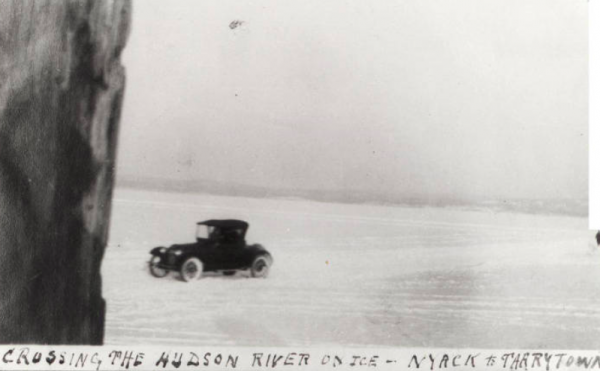 Maybe one of the “taxis” crossing the Hudson 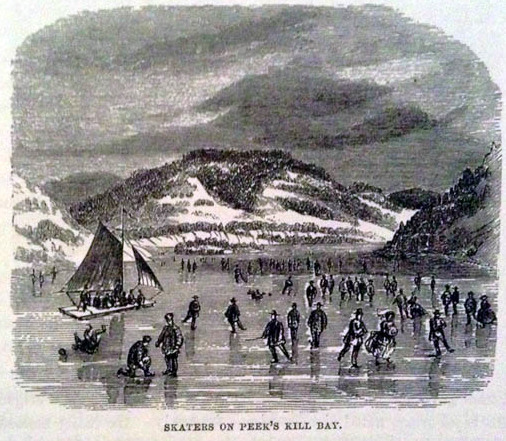 Lithograph of skaters on the Hudson at Peekskill.

Swarms of people crossed the river all day, by far the greatest number on foot. But they had lots of company. Automobiles, horses, sleighs, motorcycle parties, skaters, and children with sleds were all seen on the ice. Crossing by foot took about an hour, on skates it took 13 minutes. 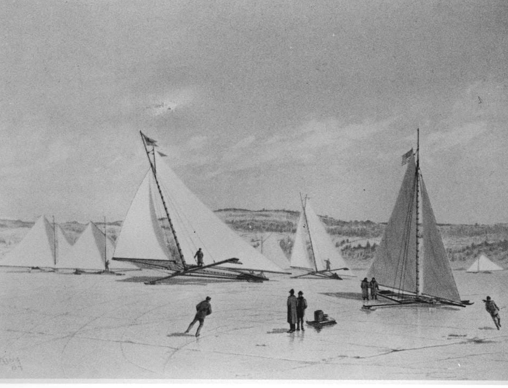 Lithograph of ice boats (or ice yachts as aficionados would say) on the Hudson.

There was a lone iceboat but it got into trouble in mid-river due to a lack of wind. The boat was towed to shore by an inexpensive but popular automobile.
From both sides of the river automobile parties came to skate. Cars held impromptu races.
Taxicabs did a brisk business at the rate of one dollar for a round trip. Esther Van Slyke remembered returning from Poughkeepsie to Nyack during her sophomore year at Vassar, crossing the river by taxi. 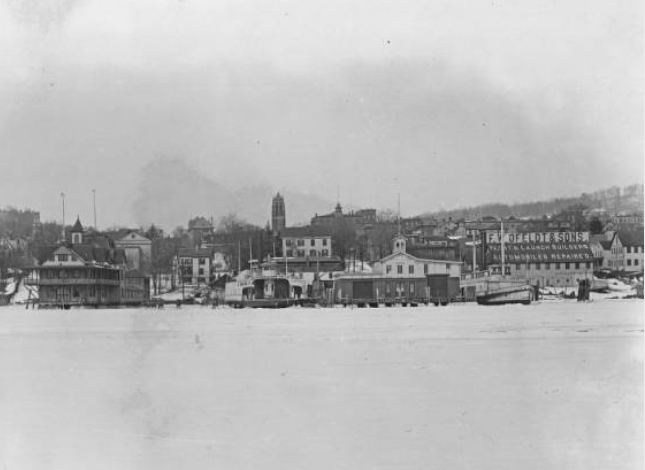 View of Nyack from the frozen Hudson River. The Nyack Rowing Association building is on the left, the ferry docks in the center. The steeple of the Reformed Church is seen in the background.

Just downstream, a battalion of two hundred soldiers from Camp Merritt marched in close formation across the river from Alpine to Yonkers. They went to a restaurant and later marched back across the river. It was said that the river had only frozen over three times in 30 years at this point.
Revolutionary War diaries indicate that the river upstate was frequently (but not always) frozen in winter. Kingston Colonel Hasbrouck noted that they rode across the river on horses and in sleighs one year until March 20. 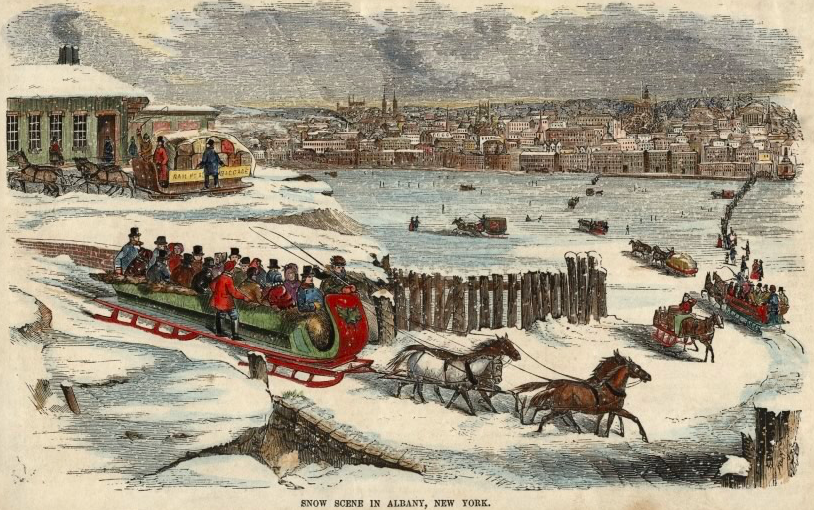 Fanciful scene of sleighs crossing the Hudson River to Albany

Mail was carried by sleigh up and down the river. In the winter of 1836/37, mail was carried between Albany and Poughkeepsie for a period of four months, with tavern shanties and way stations set up on the ice every 15 miles.

The frozen Hudson is also the subject of a romantic local legend as to how Pollepel Island got its name. More popularly known now as Bannerman’s Island (the island with its ruined castle), the island is just at the north end of the Hudson Fjord between Storm King Mountain and Breakneck Ridge. As the story goes, Polly Pell, a young woman, was sleighing on the frozen river with Reverend Vernon, her intended spouse. Guert Brinkerhoff, her true love, had warned them about going out onto the ice. Of course, they fell through the ice. Fortunately Brinkerhoff was following them and rescued both, taking them to a nearby island. The reverend realized Polly’s true affections, released her from her pledge, and married them on the spot. Hence thereafter, the island became known as Pollepel Island.
Photo Credits: Photos  of cars on Frozen Hudson and view of downtown Nyack from the frozen river courtesy of the Nyack Library.