by Elijah Reichlin-Melnick
The 2017 Rockland County Executive was a tale of two “blocs.”
There’s the one in Ramapo that everyone talks about. But in 2017, large sections of the rest of the county voted as a bloc of their own, turning out for Republican Ed Day with nearly the same monolithic support that the Ramapo bloc delivers. However, Day’s bloc was bigger.
First though, let’s talk about the Ramapo “bloc vote.” True to form, voters in the ultra-Orthodox precincts of Monsey, Kaser, and New Square turned out in large numbers in 2017 voting almost entirely for one candidate. Last year the beneficiary of most of the votes from these neighborhoods was Republican Donald Trump (Clinton carried the Village of New Square, Trump carried all other ultra-Orthodox neighborhoods). This year it was Democrat Maureen Porette. She received 11,920 votes (96%) from 29 election districts in these neighborhoods while Republican Ed Day received 334 votes (3%) and Conservative Tom Sullivan received 158 (1%). But as Trump found out last year, winning the votes of ultra-Orthodox voters in Ramapo was not enough to deliver a victory countywide. (In 2016, Trump finished with 45% of the vote in Rockland. In 2017, Porette finished with 43%).
Now let’s look at the “anti-bloc” bloc. There were 49 election districts where less than 20% of voters supported the Democratic candidate. These districts were spread across the county (at least one in every town) but with concentrations in Pearl River, West Nyack, Nanuet, Congers, Blauvelt, New City, Sloatsburg, and Stony Point. In these neighborhoods, Ed Day pulled in 12,654 votes (81%), Sullivan had 449 votes (3%), and Porette had just 2,452 votes (16%). In many of these districts, Day’s vote exceeded 85% and in a few he approached 90% of the vote. The size of this bloc of support easily allowed Day to overcome turnout from Ramapo. Turnout in these “Ed Day Bloc” districts was up at least 15% from already high levels four years ago.
Day, running as an incumbent for re-election, increased his levels of support across the county relative to his first campaign in 2013. In Clarkstown, he won 69% of the vote, up from 66% four years earlier. In Orangetown he was up from 61% to 63%, in Haverstraw from 51% to 58%, and in Stony Point from 64% to 70%. Only in Ramapo, did Day win a slightly smaller share of the vote (34%) then in 2013 (35%)—and Day improved his performance from 54% to 56% of the vote in the parts of Ramapo outside of the bloc.
Relative to 2013, Day saw a dramatically improved performance in liberal Spring Valley—perhaps not surprising, since his 2013 opponent David Fried was a Spring Valley native while Porette was not. Day also performed unusually well for a Republican in the Village of Haverstraw, winning some election districts outright and coming very close in others that are usually heavily Democratic. A glance at the map of Day’s victory also makes it clear he successfully executed his strategy of persuading many Democratic voters to support his Republican campaign. Dozens of election districts that Hillary Clinton carried easily last year went for Day by large margins this year. In Clarkstown, for instance, Clinton beat Trump last year by over 3,300 votes (52% to 44%). This year, Day beat Porette in his home town by 9,900 votes (69% to 29%).
Overall turnout was higher across the county, with an additional 8,000 votes cast this year relative to 2013 (and the current year totals do not include absentee ballots yet so they will certainly end up higher). Turnout was flat in Ramapo (up 13% in the bloc vote neighborhoods but down 8% elsewhere in town), and rose only 3% in Haverstraw, but in Stony Point there were 9% more votes than in 2013, in Clarkstown 13% more, and in Orangetown, 23% more votes than four years ago. 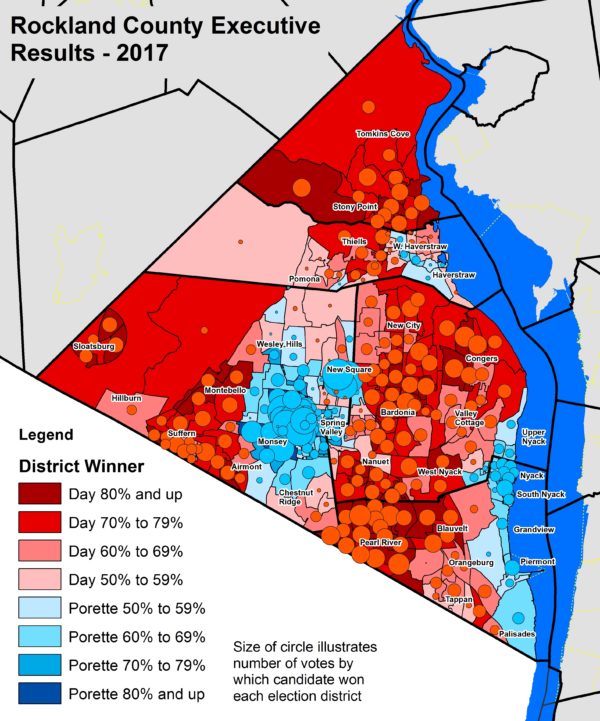 Elijah Reichlin-Melnick is a Village of Nyack trustee.