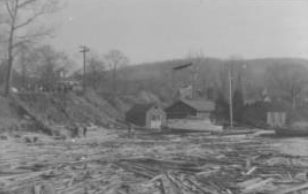 Looking north at Nyack Memorial Park after the storm. The lower park is covered in debris from boatyards and the Nyack Rowing Association boat house. Hudson House on Piermont Avenue is just behind the onlookers. Two of the memorial trees in the park blew down.

The beautiful Nyack Rowing Association boat house reduced to splinters. River Road washed out. Memorial Park covered with debris. The Hook Mountain amusement park destroyed. And no one saw it coming. The Thanksgiving Nor’ester was one of the worst storms of all time.

Three Days Before up Thanksgiving…

A hard raid was falling in New York on Monday, November 21, 1950. Winds reached 62 mph in New York City and the temperature dropped 21 degrees in three hours. Power lines went down, and one man was electrocuted in his car in the Rockaways.
In Nyack, a crowd braved the storm to go to a college admission program at the high school. Potential draft implications were discussed along with costs. Draft? Yes, the Korean War was in full swing; Americans under General Douglas MacArthur were advancing in North Korea nearing the Yalu River where they hoped to cross into China. 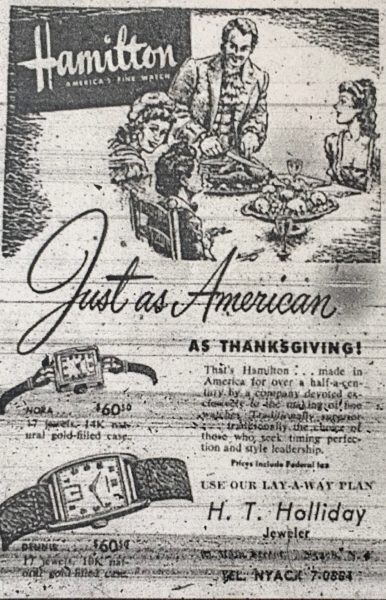 On Tuesday, Goldfingers announced they were closing. The general store was older than the incorporated village of Nyack. Located on the southwest corner of Broadway and Franklin (later becoming Lydecker’s real estate office and now being renovated), they found no buyers for their clothing and home goods store.
That evening, a spectacular fire destroyed one of the oldest houses in Nyack that was built by James Blauvelt. The house had been moved by James Jackson, the current owner, to a site on the hill near 9W. It had hand-hewn oak beams, large fireplaces, and housed Jackson’s collection of 10,000 rare books, etchings, and paintings by famous European artists. Unfortunately, water pressure was too low to allow firefighters to fight the blaze. Ironically, a new reservoir had been planned near the back of the property but not completed. 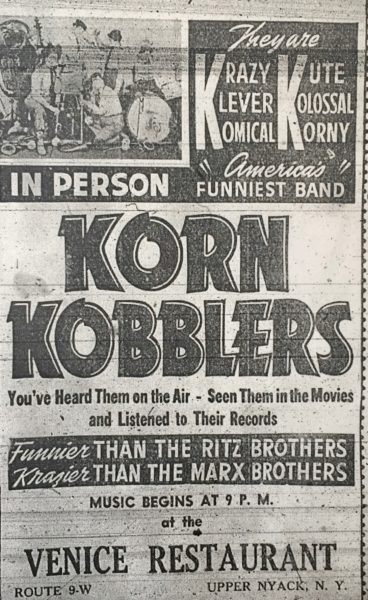 On Wednesday evening, The Elk’s Charity Ball featuring the Korn Kobblers went on as planned at the Venice Restaurant (near the current 9W Bike Shop.) The Broadway Theater was showing King Solomon’s Mines starring Deborah Kerr and Stewart Granger through the holidays. Newspapers mentioned that it would be colder but no mention of wind.
It was going to be just another Thanksgiving in Nyack.

The temperature was in the 20s with increasing winds. Nyack High School played Washington Irving in football in Tarrytown at 11a.
Fans hired a ferry to take them to the game. The game, played on an icy wind-swept field, ended in defeat for the hometown heroes. Nyack was crushed 32-7 ending, ending the season with three wins and four losses. 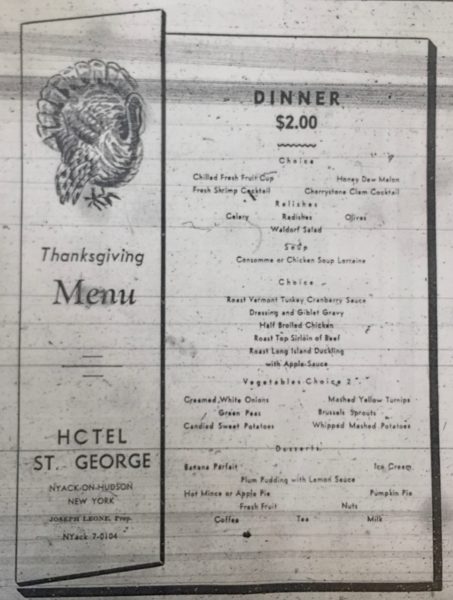 $2 Thanksgiving Dinners were served as planned at the Hotel St. George.
It was cold but everything seemed normal.

No one saw it coming.
On Thanksgiving evening the winds picked up, continuing all day Friday. Rockland County reported gale force winds as high as 105 mph on Saturday. The temperature rose above freezing. Trees were uprooted, power and telephone lines went down, and roofs were blown off. Roads were blocked by debris. Rocks dislodged from the Palisades onto 9W. In addition, some 300 trees blocked 9W between Nyack and the George Washington Bridge. The railroad crossing gates were blown off in South Nyack.
[URIS id=86931]
By Sunday, villagers were finally able to get out and see the damages. River Road to Piermont was impassable with part of the road washed out. Homes on the east side of the road were all flooded. Seawalls and property were washed away. 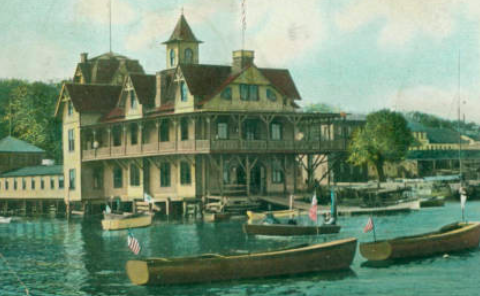 A Nyack landmark, the beautiful old Victorian Nyack Rowing Association boat house built in 1882 was totally destroyed. In 1950 it was being used by Peterson’s boat yard, which was also destroyed. Timber from the building littered Memorial Park. The lower part of the park was underwater. Two of the WWI memorial trees along Piermont Avenue were blown down.
The Nyack ferry slip was battered, and South Nyack’s Powell’s boat yard was mostly destroyed with boats sinking. At the Upper Nyack yards, a PT boat was tossed 12 feet in the air, crashed against the dock, and sank resembling a submarine. The Valhalla, a beautiful teakwood and mahogany boat, was driven ashore at the Ben Hecht place and reduced to splinters.
At Nyack Beach the pier was washed away. The Hook Mountain amusement park was totally destroyed.
Nyack was not alone. Piermont and Haverstraw were hit hard as was the rest of the county. The entire region, New Jersey, New York, and the six New England states were all affected and had to dig out from “the most violent storm ever recorded in the northeastern corner of the United States.“
Photo credits: The Nyack Library and the Journal News