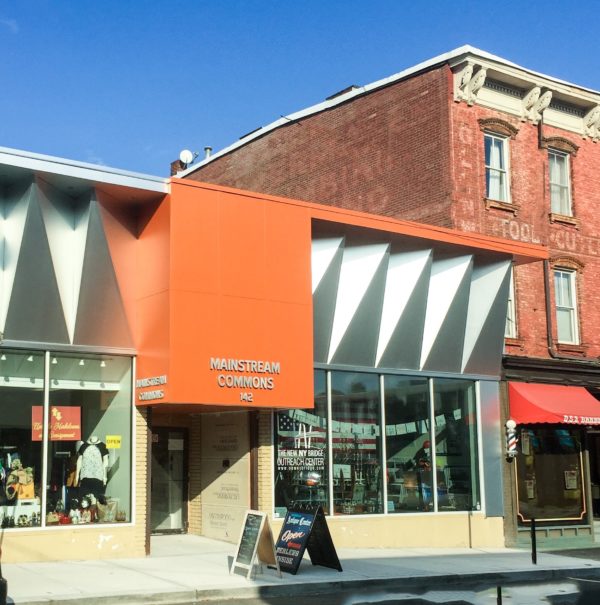 There’s a new look on Main Street. The Mainstream Commons storefront is gray and orange, a 1950s retro look crossed with a contemporary design. It’s unlike anything else downtown. Sited adjacent to a 19th century three-story brick building, some find this juxtaposition  jarring.
The two buildings straddle the Nyack Brook. One hundred years ago, this location anchored “Nyack’s first theater district” and later was home to a Grand Union grocery.

What is Mainstream Commons?

The former Franklin Antiques Center indoor mall at 142 N. Main Street has been renovated and rebranded as Mainstream Commons. The upgraded interior contains a mix of new and old stores. Some of the holdover shops date to the 1980s when Nyack was the go-to place for antiques such as Ku-Ku Antiques, My Own Little Corner/Gallery, and the Nyack Hospital Thrift Shop. The New New York Bridge Center faces Main Street, as does a consignment shop.  Other stores include Babka Paradise, Mazel N’Gifts, Hudson Hi-Fi, and Spellbound of Nyack. A travel agency is moving in soon.

In the 1950’s the Grand Union at 142 Main Street was the largest grocery in downtown Nyack competing with at least three smaller A&Ps and a number of family-owned markets. It had everything — including a parking lot in the back. 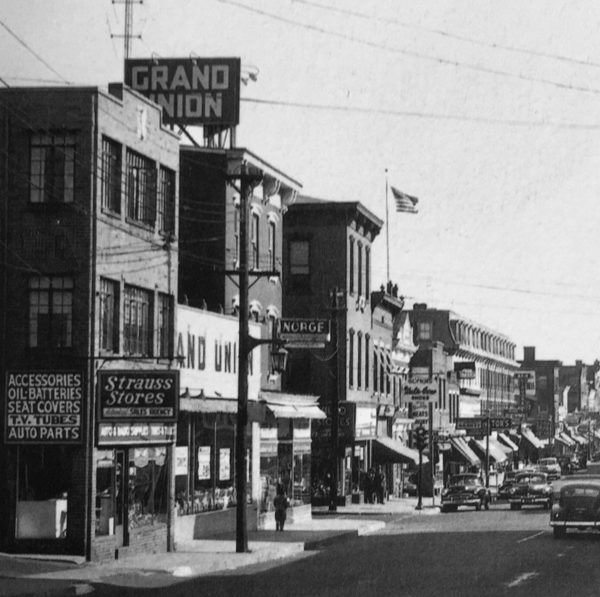 The plain looking storefront of the 1950s Grand Union sandwiched between two three-story brick buildings. Notice the sign atop the Havermale building on the corner of Main and Franklin. How did this get by the architectural review board?

Long time Nyack resident Louise Albertson remembers walking from her apartment on North Broadway to buy groceries at the Grand Union. She would complete her downtown errands and later that day the store would deliver her groceries to her third floor apartment. In our technical era, we have advanced to e-grocery shopping with, yes indeed, home delivery. That’s progress. 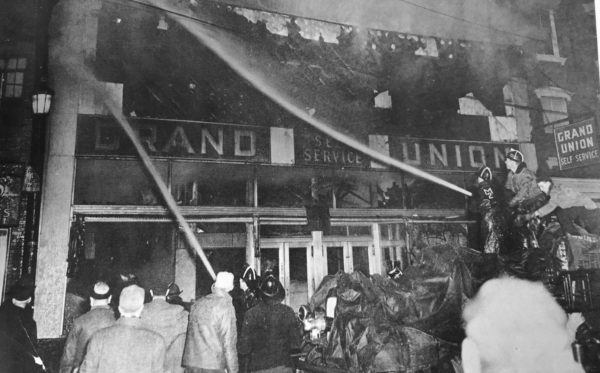 The Grand Union opened around 1940. In 1948, a huge fire engulfed the store that was the second largest commercial fire in Nyack history after the Harrison and Dalley Fire of 1915. The adjoining buildings were threatened.
The Grand Union departed in 1979 to the Hub mall in Central Nyack. They left behind a lease covenant that no other grocery store could move in for a number of years after they left. To this day, we still have no real grocery store in downtown. 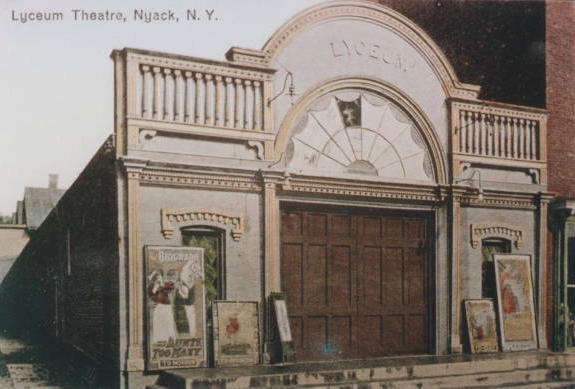 Postcard of the Lyceum with posters for 1913 silent movies out front.

The predecessor to Mainstream Commons and the Grand Union was the Lyceum. Across the street at the southwest corner of Main and Franklin was a 500-seat auditorium for vaudeville and movies with a dressing room on the second floor for actors. Around the corner from the Lyceum was an open-air theater run by a Mr. Harry Essex. For a time, this was the Nyack Theater District, long before other Nyack theaters opened, including the Broadway (later the Tappan Zee Playhouse), the Rockland, and Elmwood theaters.
Like Mainstream Commons, the Lyceum presented a unique street front with a decorative lunette above double doors framed by decorative classical columns. It was built sometime around 1910 replacing a garage and a tailor shop. The stage was in the back. The theater was long, running the length of the much-earlier, three-story brick Havermale building. 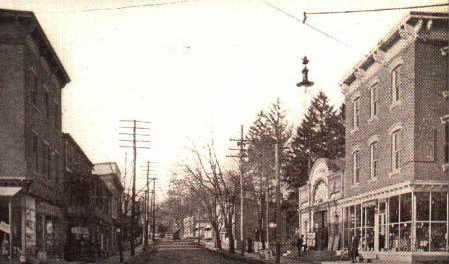 Tickets were a nickel or a dime. For the silent movies , “Hand Music” was played during the films. In summer the side door was kept open for ventilation and kids would recline and watch the silent movies from the lawn. An early post card shows a sign for a 1913 silent film, Too Many Aunts, by the Biograph Movie Company starring Gertrude Barbick and Gus Pixley.
With increased competition from the Broadway Theater and the Rockland Theater  among others, the Lyceum closed its doors in the mid-1920s.

In this article:Nyack, Nyack History