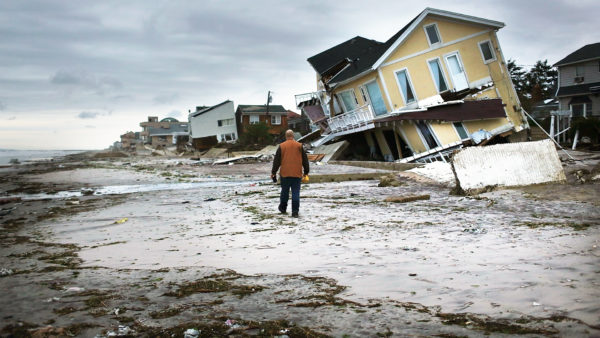 by Jordan Dale
On Saturday, October 28 I will march across the Brooklyn Bridge with tens of thousands of my fellow New Yorkers and New Jerseyans to mark the fifth anniversary of Superstorm Sandy.
Sandy wreaked havoc on our community.  I will march to honor its millions of victims, and to remember their loss and their pain.
I will also march because five years later, thousands of Sandy victims still have not been made whole.  This is the sad truth about disasters.  The wealthy and the privileged have the resources and connections needed to recover.  The poor and the disenfranchised invariably suffer more deeply and for much longer.  Many are never able to rebuild their lives.  This is what we mean when we speak about climate justice.  The one percent can insulate themselves completely; the poorest people bare the brunt of the pain.  Today this is playing itself out in Houston and Florida and Puerto Rico for all to see.
I will also march to bring the message that the severity of our hurricanes and of Asian typhoons and of floods all over the world is not an accident.  It is being exacerbated by climate change.  The oceans are warmer, which makes storms more intense.  The air is warmer, so it holds more moisture and results in record rainfall.  And sea levels are higher, which means storm surges cause worse flooding.  If we don’t stop burning fossil fuels, the rate of warming will increase, and planetary destruction may become irreversible.
I will march to wake up deniers.  Deniers to me fall into two categories.  First and worst are the liars who know human activity is causing climate change but tell the world it isn’t true so they can make more money.  Exxon leads this pack, which is why NY Attorney General Schneiderman and several of his fellow AGs around the country are considering fraud charges against the company.  Also included are the scientists, pundits, and politicians who earn money directly or indirectly (i.e., campaign contributions) by pushing the denier mantra.  This group cannot be woken up—they just don’t care.
The second kind of deniers are the ones who don’t believe that human activity is causing climate change because public figures they respect have told them so.  This is the group we march to reach.  They need to hear more facts and learn that they have been misled, and that the lives of their grandchildren and great grandchildren are in peril because of it.
Finally, I will march to tell the world community that although Donald Trump has pulled us out of the Paris Accord and although he has appointed climate change denier and fossil fuel puppet Scott Pruitt to lead the EPA, most Americans still stand with the rest of humanity in fighting climate change.  Every country in the world has committed to support the transition from fossil fuels to renewables.  Every country except for two:  the US and Syria.  I am embarrassed that my great nation, which I love, has abdicated its responsibility in this arena.  I want to be part of the movement that is happening all across America, in states and cities, in private companies and nonprofits, and among people from all walks of life to join the rest of the world to fight climate change and honor the Paris Accord in spite of our President and his cronies.  I will march in solidarity with my brothers and sisters around the globe who understand that this generation must act if future generations are to follow.
I will march to commemorate Sandy5 on October 28.  I hope you will join me!
For more information or to RSVP, go to sandy5.org.