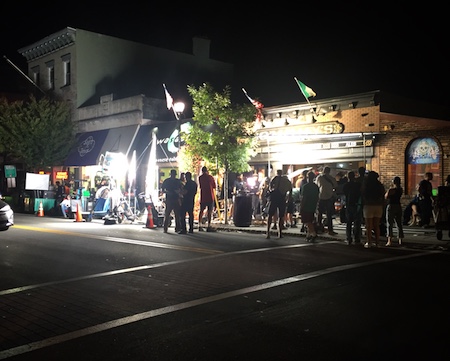 “We had a rough shoot about a month ago where streets were unexpectedly closed,” said Mayor Jen Laird White. “We went back to the drawing board and reworked how Village Hall works with film crews, and we think we will avoid that kind of problem in the future. . . . But let’s just say it’s a constant work in progress.”
The August 20 Sony Pictures movie shoot blocked sidewalks and shut down several streets near the intersection of South Broadway and Main Street. “I felt that I was lied to, from the amount of reimbursement to the timing of it,” said Seth Gopin, owner of Metal and Stone Jewelers.  “It took place on a Sunday, which should never be allowed at any time of year—not even in the dead of winter. The weekend is our busy time.”
The Sony Pictures shoot managed to secure a Sunday permit in spite of a stipulation in Nyack’s Village Code, which restricts all filming in the business district to Mon-Thurs 7a-10p. Proper enforcement of the Code has proven a recurring theme in the ongoing discussion between business owners and Village Hall.
“We have, and will continue to, work closely with the production crew to minimize any disruption to our community,” said Nyack Village Administrator Jim Politi. “Communication and outreach to the community is a priority to ensure we provide access to services for our citizens in the area of filming.”

Nyack property owners haven’t had a village tax increase since 2015. Filming fees are one of several successful strategies that elected officials, trustees and the village administration have used to freeze taxes.
In 2016, the Village of Nyack banked $38,900 of revenue from movie shoots. For the current fiscal year, movie and television revenues are 82% higher than all of last year. Since June 1, Nyack has booked $71,100 in filming fees. 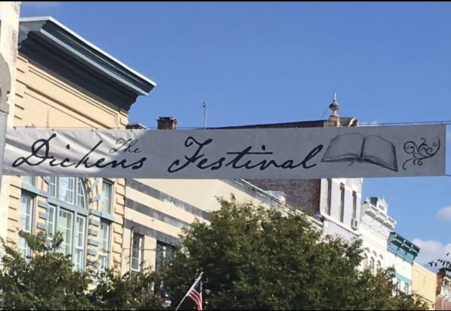 During the filming of the Lifetime TV movie “You” on Oct 3-6 2017, Veterans Park was the setting for a Dickens Festival for a scene in the Warner Brothers production.

“I do sometimes feel a touch of unease about repeated filming in Nyack,” added Nyack Trustee Elijah Reichlin-Melnick. “But it’s important to remember how relatively small Nyack’s budget really is. The entire village budget is only about $6 million, so film fees this year have so far already paid directly for more than 1% of the village budget. Relative to property taxes or parking fees and tickets, filming has always seemed like a pretty low-impact way to raise revenue without taking the money out of the pockets of residents or visitors.”
Currently, Nyack’s Village Code imposes a scale-based rate on productions. Major motion pictures—defined as any project with a budget exceeding $500,000—pay $250 per hour to shoot. The productions take on the liability for damages to public property, and may be fined for violations, such as unauthorized street closings and illegal parking. Production companies are required to pay $350 to “impacted store owners” for each day of shooting.

Rockland County was a popular filming location even before Hollywood became the epicenter of the movie industry. More recently, productions such as HBO’s The Leftovers, Hulu’s The Path, Amazon’s Sneaky Pete and Netflix’s forthcoming Land of Steady Habits have set up shop in Nyack.

Lifetime TV films the psychological thriller, “You,” in Nyack Oct 3-6 2017. No streets will be closed for filming, but Veterans Park and an adjacent parking lot will be used for the shoot. The lot behind Veterans Park will be staged with booths and tents for a scene in the film, to make it look like a Dickens holiday festival. O’Malley’s on Main Street will also be used for the shoot. And The Nyack Pour House, which is not currently open, will be used to store equipment. Crews will set up on Tues and shoot Wed-Thurs. The set will be packed up and hauled away on Friday.

What do they mean by when they say “psychological thriller?” Consider this: Stephen King called it “hypnotic and scary”!

“There generally is very good due diligence by the village,” said Jack Dunnigan, owner of Pickwick Books. “However, sometimes film companies think we’re Dodge City, and that they can do whatever they please.”
In the past, disruptive film shoots have led to direct action by the Village Board. After the crew for 2010’s The Greatest, starring Pierce Brosnan, shut down entire streets and sidewalks without permission, the village trustees imposed a $25,000 permit fee on any film shoot in Nyack, effectively killing off any movie business. A year later, a new group of village board members reversed the decision, reopening the revenue source while vowing to monitor productions more closely.
“There has to be a really good monitoring to make sure all of the merchants that are involved, in one way or another, that the location manager gets to all of us, and that they make sure that we sign the forms and are compensated,” said Paulette Ross, owner of P. Ross Boutique. Dunnigan and Gopin echoed the sentiment, calling for improved monitoring and the guarantee of timely compensation.
“We need to be notified well in advance. And have this happen only during weekdays,” Gopin said.
Meanwhile, Nyack continues to draw attention from location scouts in the film and television industry. You, an upcoming Lifetime television series based on the Caroline Kepnes novel of the same name, films this week (Oct 4-6) in Veterans Park on Main Street. Village officials say all roads will remain open to traffic, and the production will not impact bus schedules.