by James Meerdink, Parks & Trails New York
After the first month of the Orangetown Bike Study, one thing became really clear: locals and visitors have plenty to say about cycling in Orangetown! 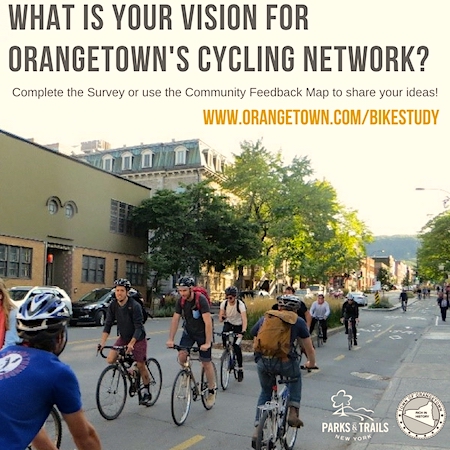 The study is a collaborative community planning process for Orangetown’s cycling network, lead by the Town of Orangetown and Parks & Trails New York, a non-profit park and trail advocate. It’s funded by the New NY Bridge Community Benefits Fund.
The bike study involves extensive data gathering and community engagement in order to assess the current state of the town’s roads and trails for biking, availability of connections to popular destinations such as shopping, schools, and parks, and overall safety and comfort of the network. This outreach is being directed by Orangetown Supervisor Andy Stewart’s office, and focuses on an online survey and an interactive Community Feedback Map. Both are easy-to use tools that allow anyone who is interested in biking in Orangetown to contribute to the plan – in five minutes or less! Users of the Community Feedback Map have the ability to comment and specifically cite locations and issues directly from their smartphones. For example, if you are at a park or on a trail and want to suggest an improvement, just open the map on your phone and drop a pin and write a short comment; you can also add photos. The Community Feedback Map has the added benefit of allowing users to like or comment on existing posts.

The Orangetown Bike Study complements a similar process just starting in the Nyack river villages and the hamlets of Valley Cottage and Upper Grandview. The Greater Nyack Bike/Walk Master Plan (GNBWMP) invites residents, business owners, parents and cyclists to sign up for the committee mailing list to find out this project. 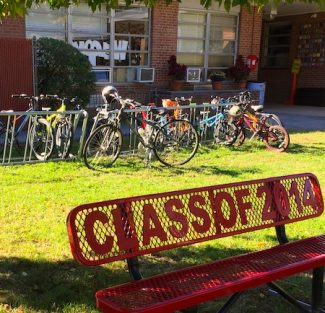 Interested in joining this effort? Write to recreation@nyack-ny.gov with the subject line GNBWMP Committee to sign up!

Alongside input obtained from town staff, local community groups and stakeholders such as Rockland County, the survey and map feedback will help the project team to focus on aspects of the future cycling network that are most important to community members.
Another set of valuable data was obtained in September, when Orangetown volunteers conducted a bike count at several important intersections and on the Esposito and JB Clarke Rail Trails to get a better idea of how many people are currently riding around town.
Nearly 200 people have taken the online survey, and the Community Feedback Map displays details that only local cyclists would notice – such as the number of bike parking spots available at a location or a particularly challenging intersection. Survey input ranges from opinions on the best places to bike in the area, to concerns about cyclists and motorist behavior, to ideas for better connecting communities across Orangetown by bike.
If you’d like to have your say, or simply want to see what all the discussion is about, visit Orangetown.com/bikestudy. You can also contact the Orangetown Supervisor’s Office or Parks & Trails New York. Look for #OrangetownBikeStudy on the town and PTNY’s Facebook and Twitter feeds. 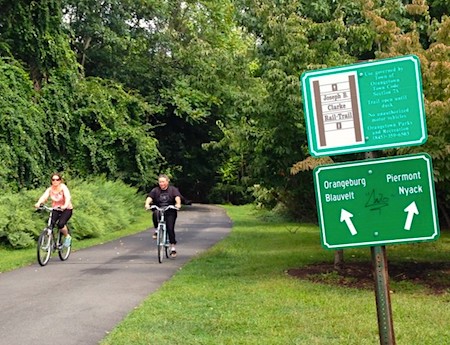 James Meerdink is a Project Director with Parks & Trails New York, a non-profit firm that has assisted communities across the state in developing trails and planning bike and pedestrian networks. 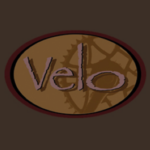 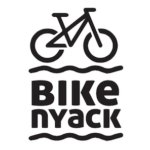