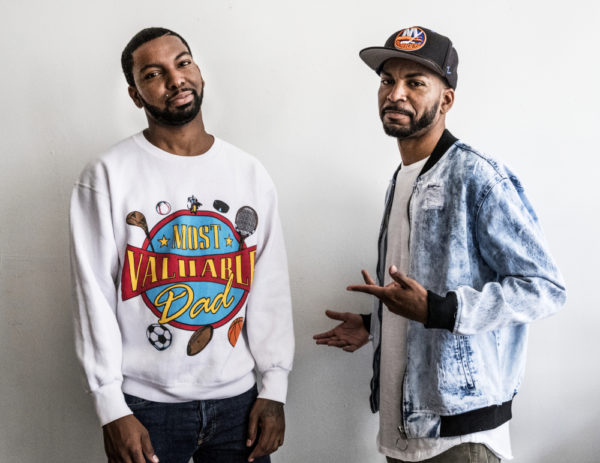 In First At-Bat For Kiam Records, TRØN & DVD Hope to Get a Hit

Norvin and Darian Van Dunk have made rap music for as long as they can remember. Performing as TRØN & DVD, the brothers’ rap careers have outlasted the mixtape-sharing platforms of their adolescent years at Nyack High School. But as the group prepares to release their label debut, Afraid of the Dark, on October 20 via Kiam Records, their approach resembles that of a new beginning.
“This is like our first at-bat,” Norvin, 28, said. “We’ve either got to hit a homer, or even just a single to get there. And then our next album, we’ll hit a better shot. It’s just steps at a time.”
When I met the brothers in Nyack’s Memorial Park, their local roots became immediately apparent. Several people waved or stopped to chat with them on the street, and Norvin wore a pair of sandals ill-equipped for New York City sidewalks. Darian wore his ever-present snapback and a t-shirt boasting the hardcore rock group PVRIS. When he spoke, it was with the same booming, gravelly voice that makes his microphone presence sound natural.
“[Norvin] and my other brother would write out lyrics for me,” Darian, 26, said of the group’s early days. “They’d make me say the words through a tape recorder, and we would record songs on old beats.”
In those formative years, “beats” often meant the theme music for video games, or the walkout songs of their favorite wrestlers. Almost two decades later, these cultural touchstones still make their way into the brothers’ music, whether as a lyrical reference to Sonic the Hedgehog or as a sci-fi-influenced instrumental. What has changed is the scope of their music, and the resources available to the duo since they met Kiam Records founder Jennifer O’Connor in 2015.
“When we went in [to Kiam Records Shop], we gave her our CDs, and she liked it enough to help us out and sign us,” Norvin said. “Which is cool, cause we were always doing everything ourselves.”

Apart from improved studio equipment, the partnership has garnered the Van Dunk brothers newfound collaborators in the form of accomplished labelmates like O’Connor, Amy Bezunartea and Tom Beaujour. The new album, too, will receive a proper promotional cycle, culminating with a release party at Mercury Lounge on October 23.
As the duo’s first full-length project to appear on major streaming services, it is an all-encompassing view of the sound and subject matter they’ve developed over their years in Nyack. Largely shaped by Norvin’s production work, Afraid of the Dark’s paranoid sonic landscape stems from indie rock as much as it does Wu-Tang Clan or Eminem. Topically, the album’s focus is local, exploring the adolescence of two young black men in suburban America.
“There’s always drama, and stuff that happens. But it’s a suburban lifestyle, to the T,” Norvin said. “We’ve got high school, being nerds and drinking—going to college.”
“Getting drunk in cul-de-sacs,” Darian laughed. In contrast to its lighter moments, the album’s title track comments on social and political tensions stemmed from recent instances of racial violence.
“That was around the time that a lot of stuff was happening, and I just had to write something to get it out,” Darian said.
As a form of self-expression, music is essential to both of the brothers’ lives. While the album’s lead single, “Vigilantes,” has just begun to gain traction, the restless duo has already started work on the next project.
“We’re going to make music and put it out regardless of the business situation,” Norvin said. “Now, we hope the business situation goes as well as it can, but we’ll always be making music.”
TRØN & DVD will perform at the Great Nyack Get Together in Memorial Park on September 16.

Chris Stanton is a recent graduate of Cornell University.