Once they were laughable tree-hugger transport. Now, automakers are elbowing their way to the front of the electric vehicle pack. And, unlike those funky ‘70s plug-ins, these are no glorified golf carts. With expanding range, hefty rebates, and spine-tingling ride, the gas-free EV is starting to look an awful lot like your next car.

In case you missed it, National Drive Electric Week 2017 is just wrapping up. But no need to get all FOMO about it. There will be events, exhibits and demonstrations throughout the year, like the Empire Clean Vehicle Festival in NYC on October 12 (9a – 2p at Union Square Park).

To get the answers right now to all your range-phobic EV questions, we spoke to Joel Levin, Executive Director of the EV advocacy nonprofit Plug In America.

EM: Let’s get the big one out of the way. People have range anxiety, and say things like: “I’ll need a new car soon, but I’ll wait to get an electric until there’s something that can go a long distance on one charge.” What do you say to that?

Well, the people who have the most range anxiety are people who don’t currently drive electric cars.

But you do need to give a more thought to picking the right EV than you do for a gas car. You have to think about how far you drive in a day, how often you take long trips, where you go, where you can charge. . . 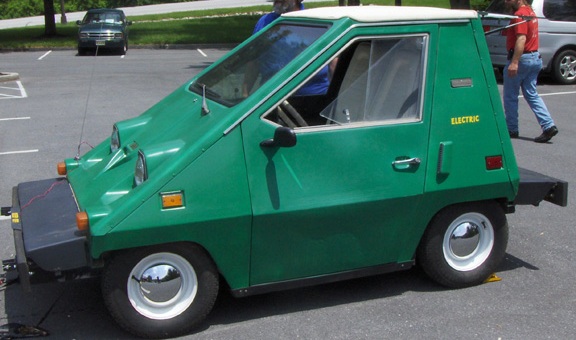 Different cars are a good fit for different people. If you get the right EV for your lifestyle, you won’t have range anxiety; you’ll be totally fine. For example, I have an older Nissan Leaf with a relatively short 85-mile range. But we have a second car that runs on gas in our family. We drive around town in the Leaf and use the gas car for longer trips. So we don’t have range anxiety at all. But if you have only one car, you need to think hard about a car that fits your lifestyle.

There are a lot of different EVs, from shorter to longer ranges, as well as several plug-in hybrids of different kinds.

There are lots of people who visit family or take vacations in distant driving range (5-7 hours). They might worry about finding a place to charge their vehicles and the time it will take, especially with kids and pets in the car. How can we be sure we’ll get to the end of our 350-mile trip without big interruptions or the anxiety of finding a plug-in place?

Well, for a once-a-year thing, maybe renting a gasoline car is the thing to do, and have an EV that’s designed for the other 364 days of your year. 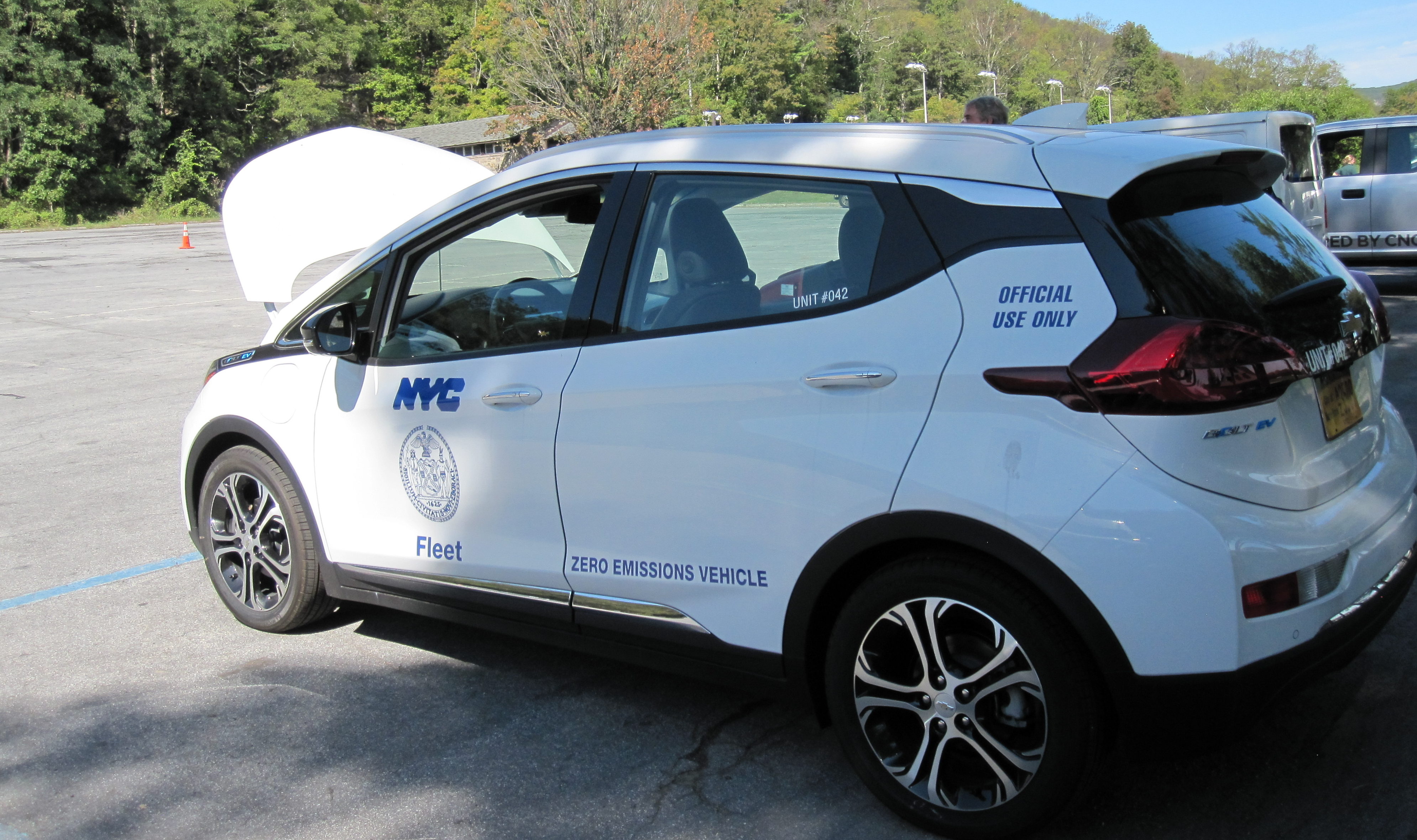 NY State is offering grants and incentives for Clean Fleets, like this  Chevy Bolt. The city is already halfway to its scheduled goal of 2,000 EVs in its fleet by 2025. Photo: Susan Hellauer

If you make that long trip often, like once a month, you’ll want to find an EV that can handle it–either a plug-in hybrid with a gas engine that kicks in, like a Chevy Volt, or a long-range EV, like a Tesla, or a Chevy Bolt. The Chevy Bolt gets 240 miles to a charge. On a trip with the Bolt or Tesla, you’d have to stop once for about an hour and charge up when you stop for lunch. My car, the old Nissan Leaf, wouldn’t work for 300 mile trips all the time. But I live in a two-car family, which an awful lot of people do.

On the brighter side of range, what about people who’ll need a new car in, say, four or five years from now. I guess things will be even better then, right?

Range is getting longer pretty rapidly. There’s a whole generation of longer-range vehicles that are coming out right now. I mentioned the Chevy Bolt which goes 240 miles. The Tesla model 3 has up to a 310-mile range, and the 2018 Nissan Leaf goes 150*. In the next year or two there will be a bunch more. So there will be a large collection of 200-mile-plus vehicles very soon. And then, how often do you have to go more than 200 miles in a day? For most people it’s not very often.

*A representative of Kingston Nissan at the 9/16 Bear Mountain Drive Electric event told EM that there will be a 225-mile Nissan Leaf by late 2018, and buyers of the 2018 150-mile model will be able to upgrade. 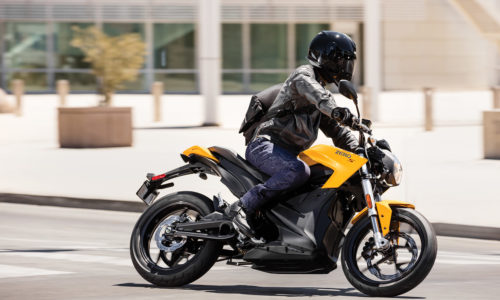 Not just cars. Electric motorcycles are taking long strides in performance and range too. This model from Zero Motorcycles doesn`t give an inch in style, either. Photo: zeromotorcycles.com

Electric Vehicles for the non-rich?

What about those of us who want to quit creating toxic fossil-fuel tailpipe emissions, but have to keep our car purchases in the mid teens or lower? Is there any option for us now?

One little secret about the EV world is that most people lease their cars, which then come onto the used car market. Nobody wants them because people are nervous about range, so the market is flooded with three-year-old used EVs that you can find for $6,000-$10,000. There are lots of great deals on used EVs, with warranties on the batteries. Nissan has an eight-year warranty, and I think that’s pretty common.

And the good thing about a used EV is that the only thing you really need to look at is the battery. That’s the most important thing.

But if I really need a farther-range vehicle for my driving habits, which means a new EV, the prices seem really high compared to gas cars. It would be great to swear off fossil fuel and icky emissions (and oil changes), but this can seem like a distant dream for a lot of us.

First of all, they’re not all $100,000 cars, like the Tesla (which is comparable to a Porsche in the gas-car world). EVs are less expensive than gas cars because there are government rebates, depending on what state you live in. New York has a $2,000 rebate, plus there’s a federal tax credit of up to $7,500 right now. Plus you’re not buying gas.* And you’re doing much less maintenance on your car; it’s not zero, but it’s much less. When you add (or subtract) all those things EVs are actually not more expensive. 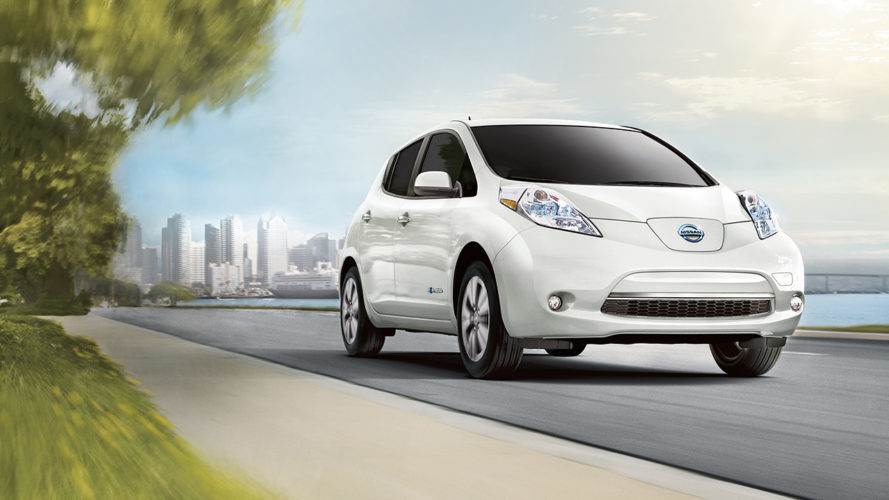 *Although electricity prices can vary considerably, Edmunds.com estimated, in 2013, that charging an electric vehicle costs about $3.50 per 100 miles. Plug In America says that, with a little ingenuity, you can save enough electricity around the house to cover your vehicle charging cost. – EM

Gas is the past

What else do you want people to know about Electric Vehicles?

Well, the idea that they’re cars for rich people is really not correct.

And across the board, the electric car is a better ride. Drivers love these cars. They are powerful, much more powerful than gas cars. They are cheaper and more convenient to maintain. Imagine never going to a gas station in the middle of winter! Every morning when you wake up, your car is fully charged and ready.

The one limitation is range, but if you buy the right car for your lifestyle, range will not be a concern.

Finally, there are two things I’d like to encourage people to do. First: go drive one. You’ll be really surprised. And, second, talk to owners about their experience. Ask them about the realities of living with their EVs—how and where they charge, about maintenance, and all the things that a dealer might not tell you. You’ll find that EV owners won’t want to stop talking about their cars. 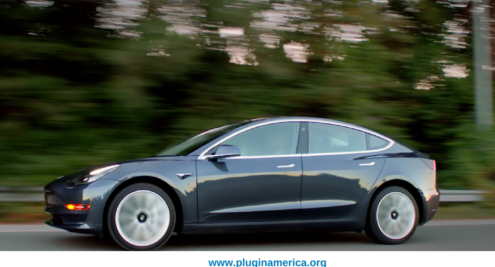 Its base model priced around $36,000, before government rebates, the 220-mile Tesla Model 3`s performance sent a tingle down the spine of the Motor Trend reviewer last month. Image courtesy Plug In America