The Debate Over Altering NY’s Constitution has the State Divided 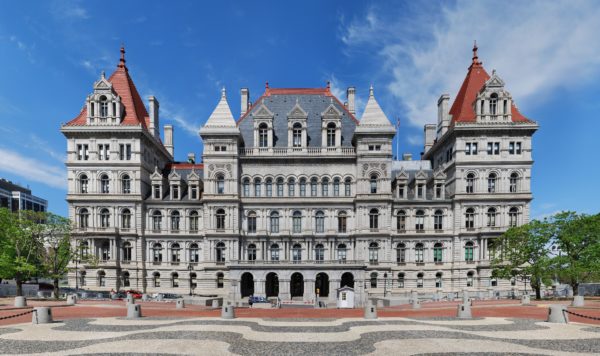 by Hannah Welles
New York State government is sometimes called “three men in a room” as a reference to how much influence the governor and leaders of the state assembly and senate have when it comes to getting deals done. This fall, Empire State voters have a chance to change how Albany works. Although many unions oppose changing the constitution, the majority of potential voters (six out of 10 surveyed) say they are open to change. The League of Women Voters, the Bar Association and the governor agree, too. However, if history is a guide, it’s unlikely that anything will happen in Albany.
New Yorkers’ chance at reform comes this year in the form of a potential Constitutional Convention. Every 20 years New Yorkers have the opportunity to vote to hold a Constitutional Convention. This year that option will be on the ballot once again, and the prospect of voters electing to hold such a convention is  igniting controversy around the state.
A Constitutional Convention would create the opportunity to fundamentally alter the way New York state functions. Convention delegates would have the opportunity to rewrite and amend the state’s Constitution, updating the document’s language and editing it for relevancy.
The vote this November is essentially a referendum on whether or not the state should change or modify its Constitution. The actual convention would not take place until 2019. If a convention does take place, it could bring about serious change in Albany–but the process is complicated.

How Would A Constitutional Convention Work?

After approving the plan to hold a convention, voters would have to wait until Election Day in 2018 to elect three delegates from every senatorial district and 15 delegates for the state as a whole to represent them at the convention. Then, in April of 2019, the convention would take place, and the delegates would propose amendments to the NYS Constitution. On Election Day in 2019, every amendment proposed would be on the ballot, and voters would either ratify or reject each one.
There have been nine constitutional conventions (in 1777, 1801, 1821, 1846, 1867, 1894, 1915, 1938, and 1967) and there have been four different Constitutions in the state’s history. The constitution that is currently in effect is from 1894. New Yorkers have not approved a scheduled convention vote since 1937.

New Yorkers that favor holding a Constitutional Convention say that the state needs a legal charter that is more reflective of current values and systems. Most groups are looking for delegates to spell out more progressive policies regarding healthcare, education, corruption, and the environment, and want to solidify the state’s commitment to these issues at a time when they could be in jeopardy at the federal level.
Groups opposed to holding a convention include several teachers’ associations and union groups across the state, including the United Federation of Teachers and the New York City Central Labor Council. Opponents argue that a Constitutional Convention would put the state in a vulnerable position that could lead to infiltration of big money and alt-right ideals. Groups fighting a convention argue that it may cost the taxpayers over $100 million and that it would present too many opportunities for corrupt politicians to influence policy and waste state money. 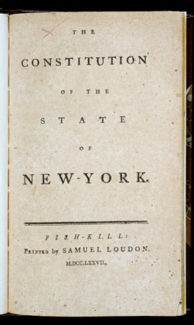 Nyack resident Lisa Kubie, a member of the New York State Public Employees Federation (NYSPEF), is against the Constitutional Convention. Kubie, and the NYSPEF believe holding a Constitutional Convention would create an opportunity for corrupt Albany officials to put their own political interests first. The New York State PEF claims that a convention would be “a waste of tax dollars” and would be “just not necessary.” Kubie also noted that amendments can be made to the Constitution without the need to go through a full convention.
Other groups that support the Convention include the New York State Bar Association, The New York Daily News, the League of Women Voters of New York, Citizens Union, NYPIRG; and in January of 2016, Governor Cuomo also indicated his support for the Convention. Supporters of a Constitutional Convention say that major gaps exist in what the Constitution actually delineates as law of the land and what New Yorkers expect from their state. Some fundamental laws and policies that New Yorkers take for granted are not guaranteed by the current Constitution. New York State, for instance, does not have an equal rights amendment. One group, called the People’s Convention, says that it supports holding a convention because the state needs “urgent changes to our Constitution to end dysfunction in Albany and return New York to its past position of national leadership.” While neither State Senator David Carlucci nor Assemblywoman Ellen Jaffee has come out with a position on the referendum vote, some legislators from the Hudson Valley have voiced their opposition to it, including Assembly Minority Leader Andrea Stewart-Cousins and Senator Jeff Klein, a member of the Independent Democratic Conference.

What Do The People Say?

A poll done by Siena College in May of this year found that more than 62% of New Yorkers are in favor of holding a convention. According to another Siena College poll, from February of 2016, 89% of New Yorkers believe corruption to be a “serious problem” in state government. If support remains at that level until the fall, New Yorkers may be looking at the first constitutional convention in fifty years.

Hannah Welles is a Nyack News & Views intern. She is a rising sophomore at Barnard College.