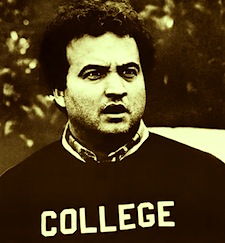 by Max Cea
Mothers, grab your Kleenex. Fathers, start designing the exercise room of your dreams. Younger siblings, prepare to rejoice. ‘Tis the season when last year’s high school seniors become this year’s college freshmen. For those preparing to leave (or who have just arrived on campus), take a break from packing your bags and read the best advice column you’ll find regarding your next four years. l promise to spare you the unhelpful cliches of the ‘study hard, play hard’ nature. The following is a list of six important lessons I learned both from personal and secondary trials and tribulations; they will drastically improve your first year and set you up for an A+ college experience (see what I did there).

For the rest of your life–unless you become a professional athlete or YouTube star–there will never be a time when so many people want to be your friend as during the first two weeks of your freshman year of college. Remember that during this period nobody knows anybody and everyone is experiencing the same mixture of homesickness and excitement towards exploring their new social surroundings. So, be friendly to everyone and make as many acquaintances as possible. Don’t be afraid to sit next to strangers in the dining hall or introduce yourself to the person you’re sitting next to in Calc. You’ll probably find your best friends in your residence hall; but, making a lot of connections will give you more windows into your school’s nightlife and also more opportunities to get the notes that you missed when you were sleeping in. Meeting people will progressively get harder and harder from the first day on, so use the first two weeks wisely.

A few other suggestions:

Don’t schedule classes that you can’t wake up for.
Scout out the best bathrooms in your school.
Submit AP and IB scores ASAP so that you have a higher priority when selecting classes.
If your professor isn’t adamant that you’ll need a certain textbook, don’t buy it.
Don’t be afraid to “borrow” from the dining hall.

College is a beautiful opportunity to reinvent yourself. You have a clean slate–so long as your new college friends don’t find the fake Facebook page that your high school friends made for you. So, steal your funniest friends’ jokes, your smoothest friends’ lines, and don’t feel any pressure to tell people the embarrassing things you did in high school. Just don’t go too far; at some point you’ll have to, you know, be yourself.

Malcolm Gladwell’s bestseller, Blink, is all about trusting your first impressions. When meeting new people at school, disregard what you have learned from Mr. Gladwell. At the end of the year my friends and I reflected on our first impressions of each other, and, for the most part, they were all wrong. I initially disliked some of my best friends.

Become friendly with your professors
…and even friendlier with RateMyProfessor.com

Especially in big lecture halls, it’s easy to become just another face in the crowd in the eyes of your professor. Make a concerted effort to go to your professor’s office hours, or just ask them questions during and after class. Professors love when you ask what you can do better next time and you might be able to bump up a grade if you simply ask. (That being said, in most cases, the grades you earn won’t be nearly as important as the experiences you gain.) All of these tactics will be useless, though, if you have a bad professor. To ensure that you don’t, check out RateMyProfessor.com, which is basically Yelp for professors. Most of the student comments contain some truth, and some of the critiques will include helpful strategies for success in a given class.

Bad Roommates Only Get Worse

Take it from someone whose roommate was a slovenly, nocturnal, 2-gallon-of-Diet-Coke-a-day-guzzling, rot-smelling gamer: Your roommate situation does not get better with time. You have to live with this person for the whole year in close quarters, and they will only become more and more comfortable living with you. So, don’t be afraid to tell your roommate–nicely–when they’re doing something that drives you crazy. Also, if you know that you dislike your roommate and that one of your friends on your hall feels the same way about theirs, do everything in your power to coordinate a roommate switch between semesters. Seriously, involve a third party, offer bribes, do whatever you have to do.

Learn How to Skim

You don’t have to read every word. This was a lesson I learned later in college, from a professor. Academic writing is, by nature, dense and overwritten. It’s also organized in such a way as to indicate what is important. Read the introduction, read the conclusion and then skim the body with purpose. Professors expect you to engage with the work they assign; they don’t expect you to read it like a novel. The exception, of course, is novels. Read those front to back. You’ll really dazzle a professor if you have something smart to say about the paratext.

Nyack High School graduate Max Cea graduated from the College of William and Mary in 2015. The story was originally published in August, 2012.