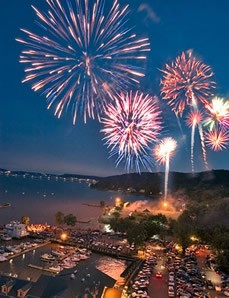 This Week in The Villages: It’s the halfway mark of a four day weekend. There are July 4th fireworks on Tuesday. And there were fireworks in Albany last week when the legislature gave the new Tappan Zee Bridge a new name.

After a five day, unexplained vacation at the end of June, the Village of Nyack website is back online.

The first pool of mosquitoes to test positive this year in Rockland County for West Nile Virus (WNV) has been confirmed by the New York State Department of Health. The infected mosquitoes were collected in the Town of Clarkstown during the week of June 19. No human cases have been reported this season.
Even the smallest amount of standing water can serve as a breeding site. Mosquitoes lay eggs at these sites, which will hatch within a few days.
A bite from an infected mosquito can spread West Nile Virus, an infection that can cause serious illness, and in some cases, death. Although a person’s chances of getting sick are small, those 50 and older are at highest risk for serious illness. Not everyone infected with West Nile Virus will become ill. However, West Nile can cause serious complications, including neurological diseases, and can also cause a milder flu-like illness with headache, fever and fatigue, weakness and sometimes rash. If you think you have symptoms of West Nile Virus, see your doctor right away. Visit Rockland County Department of Health website for more information on the West Nile Virus and mosquito control.

No construction-related lane closures are scheduled on or near the New NY Bridge project site until 6a on Wednesday, July 5. Some work may continue behind permanent concrete barriers or for emergency repairs.
Also, the New NY Bridge finally has a new name. When the Malcolm Wilson (Tappan Zee) Bridge is torn down in 2018, it will be officially replaced by the Mario Cuomo (Tappan Zee) Bridge. The old name was for a 379 day NYS Republican governor. The new name is for a three term Democratic governor…who just happens to be the father of the present governor, Andrew Cuomo.

A photo montage of Nyacks 2012 July 4th fireworks display backed by a performance of Stars & Stripes Forever by the Orangetown Concert Band.

Here are the municipal events South Nyack and the Village of Nyack for the week of 7/3. There are no meetings scheduled this week in Upper Nyack or in the Nyack Public Schools.