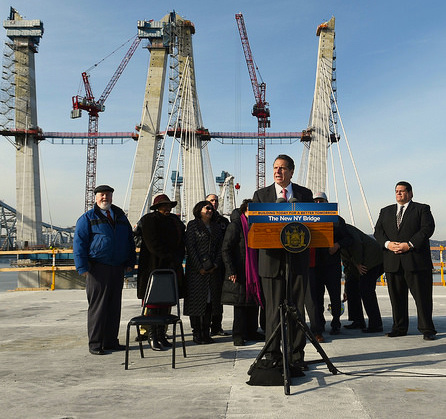 by Hannah Welles
Governor Andrew Cuomo made headlines this week with a push to rename the new Tappan Zee Bridge after his father, former New York Governor Mario Cuomo. The push came as a last minute proposal in the legislative session, raising the specter of shady state political dealings and sparking debate and controversy in Albany and the Hudson Valley alike.
The elder Cuomo, who died in 2015, was a dedicated public servant who accomplished a lot during his time as governor. He fought to legalize abortion throughout New York State, ban assault weapons, eliminate the death penalty, and to increase driver safety with the first American compulsory seat belt law. The former governor was a champion of progressive ideals. Ironically, it was Mario Cuomo who  named the Tappan Zee Bridge after former Governor Malcolm Wilson, a Republican who served in the State Assembly for nearly twenty years.
While the current governor did not initiate the renaming himself, he has been a strong supporter of it. The bill that announced the plan also includes proposals to rename a park in Manhattan after Herman Farrell (whose idea it was for the bridge to be named after Mario Cuomo) and the Purple Heart Museum after State Senator Larkin. The State Senate passed a bill with only the renaming provisions during the regular session on June 21st. The Assembly, however, voted on a bill that concerned the renaming, and several other funding issues throughout the state, in the middle of the night on Wednesday, June 28, after being called back into a special legislative session by Governor Andrew Cuomo.
The timing of the bills is curious because they come at the end of the legislative session, near the holidays, when the public pays less attention to the news and when there is little time for legislators to debate. The governor’s reasons for wanting his father to be honored with the bridge are obvious. But are his methods of achieving that goal a bit dicey? Could he have been taking advantage of the time-sensitive nature of certain aspects of the bill–like flood assistance and extending mayoral control of New York City schools–in order to brush his family name onto the new bridge quickly and without public debate?
With plenty of buzz surrounding the current governor’s possible 2020 presidential bid, it is understandable that people would be wary of Cuomo’s intention to put a large sign with his own last name up for thousands of commuters to see every day. Even though Mario Cuomo left a positive and lasting legacy in the state and the nation, residents and politicians have given several reasons to oppose the idea.
One notable opponent of the proposal is Rockland County Executive Ed Day, who thinks that the issue is “something the people of Rockland and Westchester should be weighing in on.” He contended that the bridge should not be named for a politician.
Republicans in the State Senate advocated naming the bridge for Purple Heart recipients. And some activist groups in the area suggested honoring folk singer Pete Seeger, who worked to preserve and protect the Hudson River. The daughter of Governor Malcolm Wilson expressed her disapproval of the proposal, saying that officials did not discuss the change with her and her family. Other opponents argue that it does not make sense to name the Tappan Zee Bridge after Mario Cuomo since he was not connected to it in any way, and that someone more closely involved in the project should be honored instead.
New City Assemblyman Ken Zebrowski wants to make sure that the name “Tappan Zee” remains a part of the new bridge. “Being from Rockland, I respect the history of the Tappan Zee. I think it’s sort of a universal name, so I would like to see that stay, whether it’s the Malcolm Wilson Tappan Zee Bridge or the Mario Cuomo Tappan Zee Bridge.”
Renaming infrastructure can also be extremely costly. It cost four million dollars to rename the Triborough Bridge after Robert F. Kennedy.
Despite all the controversy, both versions of the bill passed with overwhelming majorities in their respective houses; however, given that the Assembly version included many more issues besides that of the renaming, the decision will not officially be enacted until the Senate approves the same bill that passed the Assembly when they enter the next legislative session.

Hannah Welles is a Nyack News & Views intern. She is a rising sophomore at Barnard College.