by Dave Zornow
It’s a low stress game that is both fast and slow, where you can whack the ball both high and low. It includes the best parts of ping pong, tennis and badminton played and it’s played with a racquetball-like paddle on a surface which is about half the size of a tennis court.
It’s fun and can be played by all ages with a very short learning curve. It’s only problem: a funny name that provokes a “huh?” when people first hear about the sport.
The Villages of Nyack and South Nyack will host a Pickleball Demonstration Day on Sat July 15 from 3-6p at the Franklin Tennis Courts in South Nyack. It’s free and open to the public. Stop by and see what it’s all about — and maybe even get to play a game or two!
Rich Henry, a Stony Point Pickleball enthusiast and instructor, says in some parts of the country pickleball has eclipsed tennis in popularity. 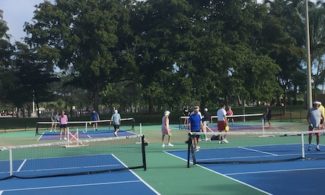 “After spending a “Snow Bird Season” in Florida, I was introduced to pickleball,” he said. “I quickly took to the game and in no time, I was addicted. I love the exercise aspect of the game, but I also enjoy because I can easily play with my wife. It’s both very social and a sport which most people can pick up easily and play well into their senior years.” When Henry returned from Florida, he was missing the game because there was no place to play locally at the time. “I organized the Rockland County Pickleball Association. We are organizing a network of places to play so more people can be introduced to the game.” Henry will be on hand on 7/15 to help demonstrate the sport and explain the rules, joined by a few locals who have also played before.

In case you missed it, Pickleball is the fastest growing sport in the US (it even has its own US Open Championship).
It’s a game you can start playing right away without a lot of practice. It’s best played in doubles — which adds a fun social element. Unlike some of the sports from which it is derived, people of different abilities can play together and complement each other’s play.
There’s a popular pickleball league in North Jersey and regular indoor play at Westrock and Stony Point, too. If there’s sufficient local interest at the July 15 South Nyack event, the Village of Nyack Recreation Dept will set up regular weekly play dates beginning this summer. Everyone is invited to check out the game on July 15, regardless of where they live.

Although you may have never heard of it, it’s getting to be a big deal for all ages all across the country. It’s been all the rage in the Northwest for decades and it’s catching fire in Florida and the New York Times says it has an international following in British Columbia, Spain and India.
Vox calls pickleball, “the next great American sport.” Because pickleball uses a more compact court than tennis there is less running. But it still can inspire fast and furious play, substituting a fickle wiffle ball for a fuzzy tennis ball which players hit with a smooth paddle.
If you never got the hang of tennis or just don’t have the knees or the endurance to play like you once did, consider pickleball. “Shuffleboard is so yesterday,” says an AARP headline about the sport. But don’t let that age-skewed endorsement fool you: pickleball tournaments all across the country are well represented by all age groups and surprising diverse styles of play, too.

If you want need more detail about the rules, visit the US Pickleball Association website.

About That Funny Name

Pickleball joins basketball and *maybe* baseball in having an origin story traceable to one person. Pickleball’s answer to James Naismith and Abner Doubleday is former Lieutenant Governor of Washington Joel Pritchard. Returning from a golf game one afternoon with two friends, Prichard and company invented the sport to cure some Saturday afternoon family boredom in 1965 on Bainbridge Island, WA. They coined the name “pickleball” as a reference to the last fishing boat to return with its catch, known as the “pickle boat.” Pritchard’s family later named their dog, Pickles, after the game.

The Play’s The Thing

If you’ve played before, come out for the day to show others how it’s done! Bring a pickleball racquet if you have one.  And if you haven’t, no worries, there will be paddles available for beginners to try out.
No reservations are required to join in on July 15. Still have questions? Email Melody Partrick at recreation@nyack-ny.gov.