by Chris Stanton
Nyack, July 30 — “I guess I’m overwhelmed,” Bert Hughes said, taking the stage with his wife, Chris, at the Music on the Hudson tribute concert in Memorial Park last Tuesday. Featuring a lively performance by the Cocomama Quintet, the event celebrated the Hughes’ and The Friends of the Nyacks for their decades of service to Memorial Park and the local music scene. 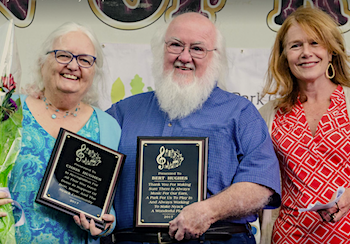 Chris and Bert Hughes with Nyack Mayor Jen Laird White at the Music on The Hudson concert at Memorial Park on 7/25/2017. Photo Credit: BrianEvansPhotos.com via Nyack Parks Conservancy/Facebook

After providing weekly summer shows in the park for nearly three decades, the Friends dissolved as an organization in 2016. Led by board member Chrissy Place, the Nyack Park Conservancy organized this year’s concert series, dedicating the annual Jazz Night – a tradition typically planned by Bert – to the Hughes’ and The Friends.
“It is a little sad that Friends is over,” said former Friends chair Paulette Ross in her keynote speech. “But we’re passing it on to newer and better and bigger organizations.”
Founded more than 40 years ago, the all-volunteer, non-profit organization helped to establish initiatives such as Rivertown Film and Visit Nyack, while also organizing community events like Apple Fest and the village’s first farmers’ market. Mayor Jen Laird White, speaking after Ross, thanked the Friends and acknowledged their dissolution as a significant change for Nyack.
“One thing that will remain as true and consistent as it always has is Bert Hughes,” White said. “For decades, Bert and his wonderful wife, Chris, have made sure that acts were booked, that the sound system worked, that Hot Dog Donna was in place, and that the families of this village can sit by the water on a hot summer night and hear wonderful musicians perform.”
In addition to his work in Memorial Park and on the concert series, Mr. Hughes taught music at Nyack High School for thirty years. In his tenure there, Hughes started the school’s jazz band as well as a music exchange program, creating opportunities for students to travel to France and Russia. He and Chris played various roles in initiatives such as Students Opposed to Starvation (SOS), Rockland Coalition for the Homeless, Hudson Valley Wind Ensemble and the Nyack Park Conservancy.
“Thank you for continuing this great community tradition,” Mr. Hughes said in his acceptance speech, acknowledging the ongoing work of Chrissy Place and the NPC. As a surprise to the Hughes’ and to the public, Mayor Laird White announced that the proposed gazebo in Memorial Park will be dedicated to Bert and Chris.
“We haven’t agreed on a name yet,” she said. “But we know one thing: it’s a tiny way of saying ‘Thank you’ for all that you have done for all of us for so long.”