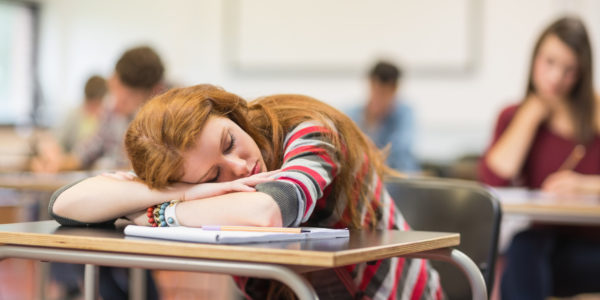 by Halle Goodman-Weinbaum
I stumble into my first period class. It’s 7:25a, and only two other people are in the classroom. The remaining 20 kids in my class aren’t late yet. They still have five minutes. By 7:28a, 10 more students have shown up. That leaves 10 students still unaccounted for. At this point, the teacher has walked in and is almost ready to begin the lesson. As the final bell rings, two kids drift in. Class begins, with several students still not in attendance. It is a cold, rainy day, and even I, a committed student, find it difficult to keep my eyes open. Late kids start trickling in at 10 minutes, 15 minutes, and 20 minutes into the period.
This scene is typical at Nyack High School, and I’m sure at many high schools around the country. Lack of timely attendance can certainly be attributed to laziness and a carefree attitude towards school, but recent scientific investigation suggests a different cause: lack of sleep. As the National Sleep Foundation explains, teenagers are on a later sleep-wake cycle than children or adults. In the early morning, when school starts, a teen’s body feels as if it is the middle of the night and it hasn’t had the proper amount of sleep. In light of this new evidence, our school board is in the process of evaluating how to best go about changing our school times through a Citizens Advisory Committee.
It is widely acknowledged in the medical community that sleep is important for people of all ages. Sleep helps with learning, decision making; it repairs the heart and blood vessels. However, sleep is especially important for teens. According to the National Sleep Foundation, teens need between eight and 10 hours of sleep to function properly. Only 15% of students reported getting 8.5 hours on school nights.
Lack of sleep can have detrimental consequences. The Nationwide Children’s Hospital reports that sleep deprivation increases the likelihood of teens engaging in risky behaviors, such as drinking, using drugs, and driving dangerously. Additionally, teenagers have the highest risk of falling asleep at the wheel, especially in mid-afternoon. This is a significant issue at schools like Nyack High School where many upperclassmen drive themselves to and from school.
To combat the medical consequences and unsafe behavior, the American Academy of Pediatrics recommends that high schools should start at 8:30a or later. Its reasoning is that although homework, after school activities, and technology use can contribute to a lack of sleep, early school times mean teens are not able to get the amount of sleep they need to function optimally. A finding that should be particularly concerning to schools is the connection between sleep and grades. A 1998 study found that students who routinely received As and Bs got 25 minutes more sleep and went to bed 40 minutes earlier than students who routinely got Cs, Ds, or Fs.
I talked to a few classmates, and they all were very supportive of starting school at a later time. While no one was opposed to starting school later, some expressed doubt that it would actually happen–at least in the near future. Teachers were also supportive of later start times. Desiree Moyer, a psychology teacher, said that she noticed a difference in academic performance in her morning classes compared to her later classes. She did, however, note that a few individuals seemed to be more focused in the morning.
The abundance of scientific research has not gone unnoticed by the school board and administration. School Board President Karen Hughes said that a Citizens Advisory Committee has been created to research the connection between sleep and student health, and to “[examine] logistical considerations such as bus schedules, impact on after school activities and implications for changes to the high school start time on our middle and elementary school day.”
Taking into account the bus system, after school activities, and the other schools in the district is important; these are the primary obstacles to pushing back high school start times. “The staggered times permits a school district to utilize the least amount of bus vehicles and drivers to transport their students as essentially the same buses and drivers are able to be used for the high school, middle school and elementary schools,” said Nyack Schools Superintendent Dr. James Montesano. The committee will be reporting back to the school board in September.
Although it seems that moving the high school to a later start time would be difficult, I ultimately think that it should be done. Some may look at the connection between sleep and grades or sleep and risky behavior and see correlation not causation. They may question that more sleep, rather than more studying, results in higher grades. Maybe kids drink and use drugs due to a lack of education on the topic, and not due sleep deprivation. But even if there is no strong cause and effect, requiring teens to be fully awake and functional at an hour when their bodies just want to sleep is counterproductive.
The most obvious solution would be to switch the starting times of the elementary school and high school. But the issue of after school activities, especially ones that require the participation of other schools, would still need to be addressed. Given all of the logistical challenges, I doubt Nyack will decide to change the high school start time. Even if they choose to do so, it will likely take years before a change is implemented. Still, I hope that Nyack High School, as well as schools around the country, move towards moving back start times. The ostensible mission of school is to learn, and it’s hard for students to learn if they are half-asleep.

Halle Goodman-Weinbaum is a Nyack News & Views intern. She is a recent graduate of Nyack High School.

In this article:school, school start times