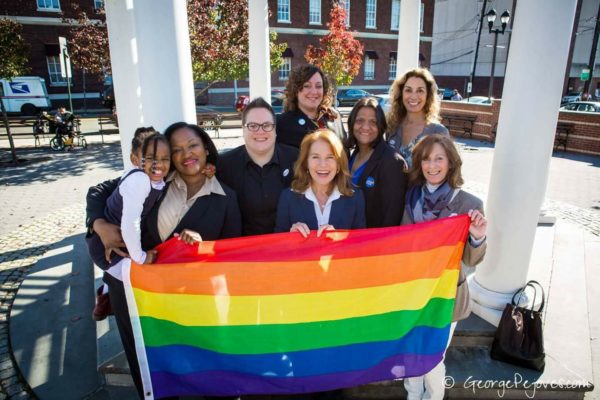 by Ethan Morel
It was on a bright, sunny day that a home for the local LGBTQ community was made in Nyack.
The Rockland County Pride Center, located on 28 S. Franklin St., has finished renovations and held a grand opening on Wednesday.  As the crowd of both straight and LGBT people finished gathering in the streets, Paul Adler of the Rand Commercial Realty and one of the board members for the center, took the podium.
“I am very, very proud to be a part of this really historic moment, here in Rockland County where we’re able to say that we’re really a part of history, and we’re on the right side of history,” he said.
The opening of the Pride Center marks the first time the LGBTQ community of Nyack will be able to find such a space in their hometown. The center offers services such as a youth drop-in center and a family center for adults and children to socialize. And there are services for relatives of LGBTQ people. Parents with gay or questioning children will find answers to their questions and their children’s’ questions.
Many people, from local citizens to respected government officials, have vocally supported the construction of the Pride Center.
When she spoke to the crowd, Lt. Governor Kathy Hochul called the Center “a place for people to come and be themselves and be with others who understand them.”
But perhaps the most well-known supporter for the Pride Center is Rosie O’Donnell, who contributed $150,000.
“There are many minority groups living and thriving in this community.  And I‘m happy to say that I support as many of them as I can,” she said.
And at a time when the president of the United States has been seen as a threat to LGBTQ advances, local support is all the more important.
Ms. O’ Donnell shared several quips and jokes about President Trump during her speech.
“He’s still in office,” she said.  “I’m sorry, I’ve been tweeting my way to make him sane on a daily basis.”
And the executive director of the Rockland County Pride Center, Brooke Malloy said she has been receiving numerous calls from both straight and gay people of Nyack who are looking for help.  She said that it is a gift to answer these questions because “when you have answers, that’s good.”

Ethan Morel is a Freshman at St. Thomas Aquinas College.