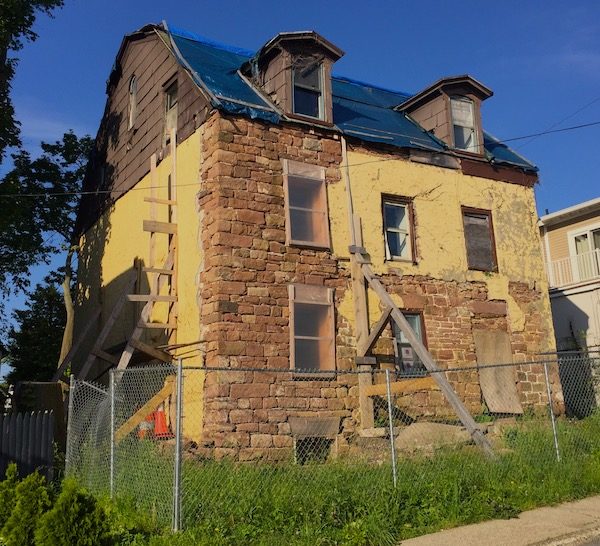 Turns out that one miracle isn’t always enough. Sometimes you need two to turn the tide of history.
The sagging sandstone house at the foot of Main Street is named after a Nyack businessman and visionary who really did drain a swamp to create 200 year old infrastructure. John Green built a house near his docks on the Hudson. Today it’s the second oldest house in Nyack*.
Not long ago, it was pretty close to being torn down. Or maybe just falling down.
In 1810, John Green opened Nyack’s first lumber yard; he also built Nyack’s first dock. In 1816, Green teamed up with Tunis & Peter Smith, Edward Suffern and Isaac Lydacker to build the Nyack Turnpike, linking the village to Suffern. This Rockland County roadway still exists as Route 59. The turnpike crossed the Greenbush Swamp, a marshy patch of land near the Palisades Center mall.
In June 2014, local elected officials and community leaders gathered in front of the John Green House at 23 Main Street to celebrate a new “zombie house” law which would gave municipalities more power to take over abandoned properties. The 1819 Dutch sandstone home was deemed unsafe by Nyack’s Building Department; its most recent residents had been squirrels and squatters. In September 2015, local activists, lead by attorney Rick Tannenbaum, successfully negotiated with Ocwen Financial Corporation to take ownership of the foreclosed property. Fundraisers were held; volunteers pitched in; the developers of the adjacent TZ Vista condominium development supplied expertise and funds to shore up the structure.
Despite that progress, the John Green House is still a dream looking for a viable business plan. At a recent meeting of the John Green Preservation Coalition board, many ideas were presented — and rejected — for a sustainable business model for this house with a breathtaking Hudson River view.
The consultant that is working with the village on Nyack’s Local Waterfront Revitalization Program noted that the John Green House is along the path of a proposed Hudson River walk that may someday connect Memorial Park, the Nyack Marina and the future public park at TZ Vista. Based on his experience working on Rockefeller properties, BFJ Planning Principal Frank Fish offered ideas to the John Green House board. A lot of ideas were pitched, including a suggestion by a board member to turn the first floor into a Cat Café where patrons can commingle with cats.
[URIS id=82067]

What Will Become of John Green’s House?

by Ken Sharp
Nyack’s shoreline is at a turning point.
Long held dreams of a more functional marina, a more active waterfront, a more inviting park – these are all in the process or on the verge of coming to fruition. In a case of “everything old is new again,” we find ourselves bringing commerce and activity back to our shores. Charter boats may soon replace steamboats, excursion ferries may soon replace commercial sloops – tourism may soon replace manufacturing. And where there are tourists, there needs to be lodging.
Splashy advertisements on trains and billboards encourage folks to Visit Nyack, but until the Time Nyack hotel opened there were very few places to stay in the village. Today, there aren’t any lodgings that are both close to the river and downtown as the house at 23 Main Street.
Right now, we’ve got a big empty house, filled only by potential. John Green was a visionary who always had an eye on the future. He patiently aligned his stars one by one, building a path toward the fulfillment of his dreams.
Can we be like John Green? Can we see a vibrant future and work toward being a part of it? Can we be that visionary?
Sure we can.

Ken Sharp is a John Green Preservation Coalition board member.

A miracle occurred two years ago when a financial institution turned over the deed to the non-profit which now owns the house. Is it too much to hope for a second miracle? Can some of Nyack’s leading community groups set aside their individual interests and turn their common problems into shared opportunities?

Could a future reboot of the John Green House address all of these issues? Could the bottom floor serve as a Nyack Chamber Visitor Center with exhibit space that also hosts Historical Society of the Nyacks exhibits? If the top two floors were repurposed as Bed & Breakfast rooms, could the John Green house get a steady revenue stream to complement business rental income from first floor tenants? True, the building doesn’t have a kitchen or a restaurant. But given that it’s a short walk from many Main Street and Broadway eateries, that wouldn’t seem to be a problem. The spectacular view, combined with its location adjacent to downtown and the waterfront, might attract visitors from all over the the world who want to see the views that inspired American realist painter and Nyack native Edward Hopper.
After almost 200 years, maybe this Old Green House has one more miracle left in it.

Dave Zornow is publisher of Nyack News And Views. Michael Hays and his camera are away this week but will return next Wednesday. 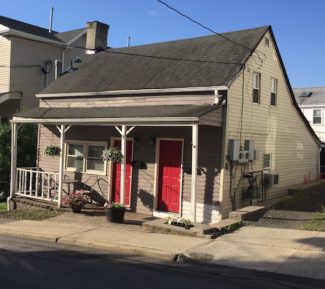 * The oldest house in Nyack is two doors up from John Green. According to the Historical Society of the Nyacks, 35 Main Street was built in 1810, nine years before the John Green House.