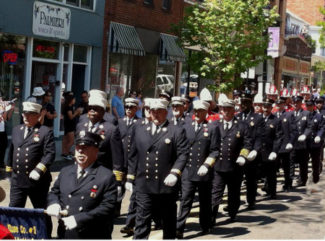 This Week in The Villages: Today is Memorial Day, commemorated by 11 events in and near Nyack that honor Americans who lost their lives while serving in the armed forces.
Because Monday is a holiday, trash pick up in the Village of Nyack will move to Tues May 30.
Nyack Hospital holds another informational meeting for the public on their proposed expansion on Tuesday; the annual African American Day Parade and Festival is Saturday; and Nyack Center’s Men’s Cooking event is Sunday.
Here’s a list of Memorial Day events across Rockland County:

If you have thoughts or questions based on either what you read here or things you’ve heard buzz about in the community, please feel free to reach out to me directly by email at dnhammond4@gmail.com or by phone at 914.954.7556. — Dr. Don Hammond

by Don Hammond
The Nyack Village Board proclaimed Sunday May 28, 2017 Reverend Willie Hairston Day in the Village of Nyack. Rev. Hairston and his wife are celebrating 27 years of ministry and service to the village in their role as Pastor and First Lady at Pilgrim Baptist Church.

Representatives from Nyack Hospital will hold a public informational meeting about the Hospital’s Care Transformation Project on Tuesday, May 30 at the Village Hall in Nyack. The meeting begins at 7p and will include an update on the project as well as a question and answer session.
Nyack Hospital’s Care Transformation Project includes the construction of a two-story addition which will double the size of the existing emergency department and add a new medical village. The construction will also incorporate the renovation and reconfiguration of existing space which includes the current Emergency Department, hospital lobby and adjacent corridors. Construction will begin in the next couple of months and is expected to be completed in 2018.

Nyack Center is Looking for a Few Good Men (Chefs)

On Sunday, June 4 from 5-7p join other men in cooking up a great time of food and fellowship for the Nyack Center. All proceeds go directly into the Nyack Center’s programs to assist children and families in need. Men Cooking is one of the most popular events of the year and attracts over 200 guests.
If you would like to participate, send an email to Dave Prouty, prepare a favorite dish at home that would serve about 20 people, arrive at Nyack Center by 4p on Sunday, June 4 to set up and get ready, bring sternos and trays or warming pads and an extension cord if your dish needs to be kept warm, and a serving spoon. Everything else is provided. There will be prizes for best main course, best appetizer, best dessert, best children’s dish and best side dish. You will also be joined by Celebrity Chefs from local food hotspots. There will be live auction items as well.
— Don Hammond

Here are the municipal events in Upper, South and the Village of Nyack for the week of 5/29. There are no Nyack Public Schools meetings scheduled for this week.

In this article:memorial day, The Villages