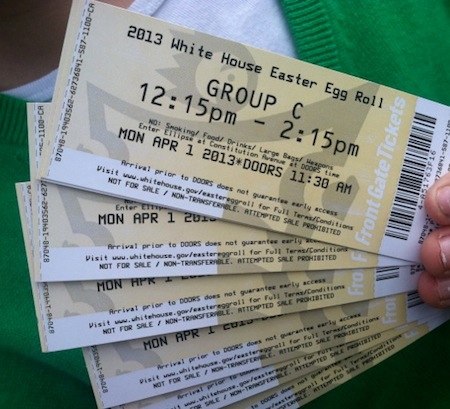 A lot has changed over the past four years. We’re taking a roll down memory lane: Easter at Obama’s White House

by Tracy Kachtick-Anders
A few years ago, my family and I enjoyed Easter Sunday on the lawn of the White House in Washington, DC. It was a day of long lines, cartoon characters in costume, crying children and more long lines. It was also an experience that we will never forget.
It was the best of times — and a some of the worst times too. Although it was thrilling to be at the home of the first family with so many other excited visitors, at times it felt like a day at Disney without a fast pass.
We started the day off dressed in our finest, which in our house, really just means anything without stains or holes. After an uneventful flight to DC and a taxi ride to 1600 Pennsylvania Ave, we were directed to a line. And then another line. That line turned into a giant line — which did not move for a long time — which turned into what seemed like forever. 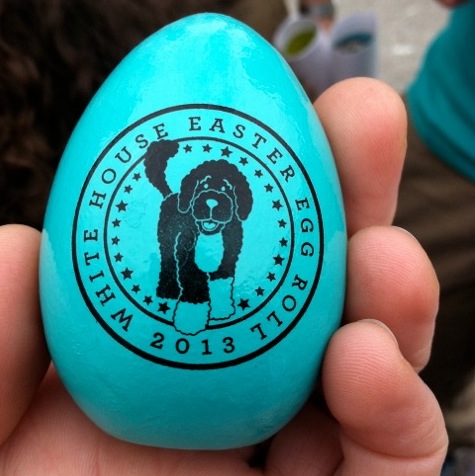 The younger kids began to throw dried grass, roll in the dirt, poke each other and ask to be held. Then they staring eating sticks and crying. In a desperate move to keep the peace, I pulled out iPads, iPods, and an etch-a-sketch to occupy the attention of my family. I tried not to moan, roll my eyes, or give any indication that I was bored and frustrated.
After an hour of waiting, we finally began to move again. Then our line converged with another line and we we waited some more. When we reached the security desk, our bags were searched and we were directed toward another long line that stretched toward our own version of the Emerald City, the White House. This year was the 135th annual Easter Egg Roll and we felt like we had been waiting in line for over 135 years to reach The Promised Land at the head of the line. With only 45 minutes left of our two hour allotted time slot, it was time for the games to begin!
We had high hopes of meeting President Barrack Obama but that was not to be the case. My youngest son Andres, 4, practiced saying “Barack Obama” over and over just to be ready. The 11 year old, Archie, brought along an easter egg full of chocolates in hopes of handing it to the president. My daughter Savana told friends she would be calling them during her personal meeting with the Big Guy. I just wanted to do the “mom dance” with Michelle. Instead of the first family, we were greeted by Power Rangers, Scooby Doo, Cat in the Hat, and Sponge Bob. Alas, some dreams are not meant to be!
After posing with the characters we met and crying about the ones we didn’t meet, we headed to the Egg Roll line. Another line brought us right in front of the White House where we posed haphazardly — much the way you would expect five tired kids and an exhausted mother to pose after waiting in a line for over two hours. I pity the photographer whose job it was to get 30,000 children of all ages to smile and look at the camera while not chewing their shirts. Although not Annie Leibovitz material, we at least we have photographic proof that we were there.
The Egg Roll was the creme de la creme of the day’s events. Parents were sent to one end and kids assembled at the starting line on the other side. Someone shouted “GO” and it was all over seven seconds later. My family was now part of White House Egg Roll history. 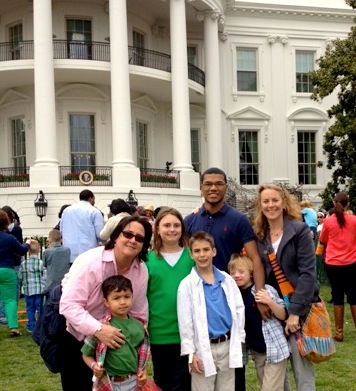 The whole day reminded me a bit of a recent article I read in the Huffington Post about a mom who had photographed her children after building of a snowman. Sometimes a parent’s photos lie. We catch our children squinting into the sun in front of a snowman, at the beach, or in front of the White House. They look happy, we lead others to think it was a happy experience, but sometimes the photos don’t tell the whole story. The camera doesn’t capture how we are begged our kids to be in the photo, our exasperation when we tucked their their chewed shirts back into their pants the moment before the photo is snapped, or the cookie bribes we promised to crying eyes. In between all of the tears, there are some happy moments. And by gosh, a visit to the White House is still a visit to the White House.

Tracy Kachtick-Anders, the former owner of Vincent’s Ear on South Broadway in Nyack, attended the 135th annual White House Egg Roll on Sunday, April 1 2013 with five of her children and 30,000 other lucky ticket holders as guests of The Family Equality Council, a non-profit that represents over three million lesbian, gay, bisexual and transgender parents and their six million children.