by Mike Hays
There are several local old stone churches in our area but none are as old or in as original state as the Old Stone Church in Upper Nyack. Maybe you have passed it hundreds of time driving or walking. Springtime is a good time to pause, take a deep breath and study the simple beauty of the stone walls, windows, and pitched-gable, slate roof located at 347 North Broadway. 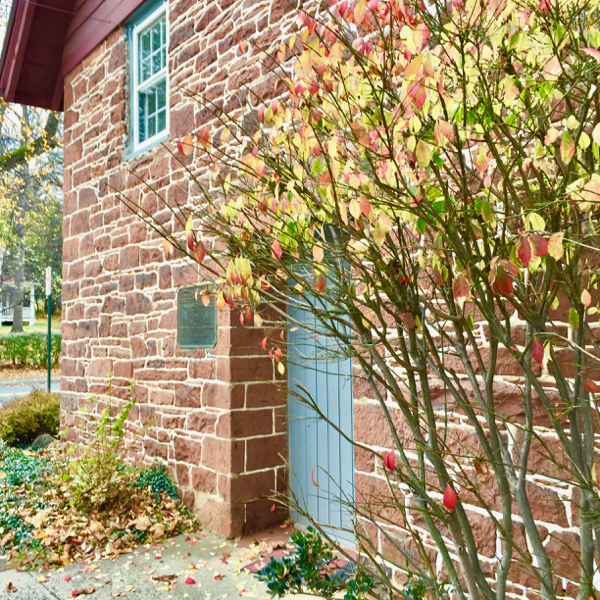 Begun in 1813, the completed church was dedicated on March 2, 1814  with native sandstone on a stone foundation. It is of a size and scale appropriate to its time, so unlike our era of mega-buildings. William Palmer donated the land across from his house and stone from his nearby quarry, and John Green and Nicholas Williamson gave a total of $3.00 to fund the building along with some financial aid by others including Garret Onderdonk. Construction was started only one day after they agreed to build it.

It is the oldest church in Rockland County and first housed the Methodist-Episcopal Church of Nyack. It was successful from the start. It had a wood-burning stove, and a large copper coil lantern but no organ. Later it became a Sunday school, then a non-denominational church, and now an historical site owned by the village. Once covered in ivy with a picket fence, it has been meticulously restored thanks to the efforts of many volunteers.

The Old Stone House was acquired by the Village of Upper Nyack several years ago for public use and to preserve it as a local landmark. It is now listed on the NY State and National Registers of Historic Places. “Three things make Upper Nyack unique and are loved by its residents,” says former Upper Nyack Mayor Mike Esmay. “Hook Mountain, the Petersen Boatyard and the Old Stone Meeting House.”

Michael Hays is a 30-year resident of the Nyacks. He grew up the son of a professor and nurse in Champaign, Illinois. He has recently retired from a long career in educational publishing with Prentice-Hall and McGraw-Hill. He is an avid cyclist, amateur historian and photographer, gardener, and dog walker.

He has enjoyed more years than he cares to count with his beautiful companion, Bernie Richey.