Earth Matters, formerly known as Sustainable Saturday, focuses on conservation, sustainability, recycling and healthy living. This weekly series is brought to you by Green Meadow Waldorf School, Maria Luisa Boutique and Strawtown Studio.
If Earth Matters to you, sign up for our mailing list and get the next installment delivered right to your inbox.

Hungry kids unpack their sandwiches, eat, talk, and laugh—a normal grade-school lunchtime. But there’s something missing at West Nyack’s Blue Rock School: plastic in the trash. For as long as marketing director Beth Norman can remember in her 12-year tenure, the private school—which last year hosted a screening of the 2010 documentary Bag It!—has had a no-waste lunch policy: no disposable plastic bags, bottles or utensils.

The carry-in, carry-out cafeteria has drastically cut the amount of waste that Blue Rock produces. And it’s raising a whole lot of consciousness among the first-to-eighth graders, who make art from discarded plastic, and undertake ban-the-bag letter-writing campaigns.

But clever art projects and letters, even from these eco-passionate kids, aren’t enough to get our villages, towns, and counties rid of that low-hanging plastic fruit: polluting, petroleum-hogging, single-use polyethylene bags. They’re used for about 12 minutes and then abandoned to their forever-plastic fate, to the tune of a trillion or so bags a year. What will it take to make a change?

Well, it’s complicated, difficult, maybe even risky, but it can be done.

In an effort to join San Francisco, Seattle, Washington DC and a host of others here and abroad, New York City spent years hashing out their single-use plastic bag fee law. But just hours before its effective date (February 15), it was scrubbed by Gov. Cuomo, who signed an Albany bill to block the “deeply flawed” law for a year, while promising a yet-unnamed task force to look for statewide solutions. Democrat Cuomo joins a list of governors — Republican governors, that is (including Indiana’s Mike Pence) — who have signed similar legislation barring bag fees or bans. 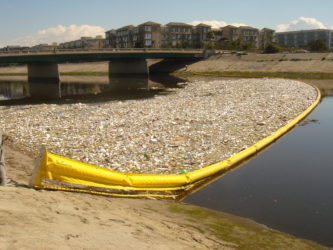 Aside from litigation threats, and strong-arm political lobbying by groups like the American Progressive Bag Alliance, lawmakers also fear backlash from constituents accustomed to free plastic-bag bounty for lining trash cans and cleaning up after their pets. Instead of articulating this fear, they cite the “burden on the poor,” which the proposed NYC law addressed by 1) exempting those who use food stamps, and 2) having the sanitation department (which stood to save major bucks on disposal fees) hand out plenty of reusable bags in low-income neighborhoods. Even such careful provisions were of no use against Albany’s politics-plus-plastic-bag-lobby juggernaut.

And that’s not surprising: Every village, town, county or state that manages to ban or impose a fee on single-use plastic bags provides a legal “how-to” handbook for the next guy. The plastic-bag lobby fights back hard, seeing each bag ban as another one down in their domino theory of disposable bag extinction.

So, how did our local state legislators vote on that block-the-NYC-bag-fee law?

Local assemblymembers Ellen Jaffee (D-97th District, which includes Orangetown), and Ken Zebrowski (D-94th District, including Clarkstown), both members of the Assembly’s Environmental Conservation committee, voted with the majority in favor of blocking the NYC law. For Jaffee, the vote seemed contrary to her strong environmental stands as a Rockland County Legislator. Even so, she says she’s no fan of the bag. “I believe these bags should be banned and consumers educated about the long-term impact of a short-term convenience,” Jaffe said in a statement. Zebrowski, on the other hand, stated that he is “hesitant to adopt any statewide policy without first hearing from consumers, small business owners and environmental experts,” and is advocating a “robust dialogue” in the Assembly on this subject.

One of the few who voted against the one-year moratorium is State Senator David Carlucci (D-28th Senate District, which includes Orangetown) who said that he was unwilling to stand in the way of any municipality trying to rid itself of the polluting burden of plastic bags. “We can argue about the nuances of the law,” said Carlucci in a phone conversation, “but it was local legislation, approved by the City Council. It was New York City trying to keep garbage out of the landfill and off the sidewalks.” 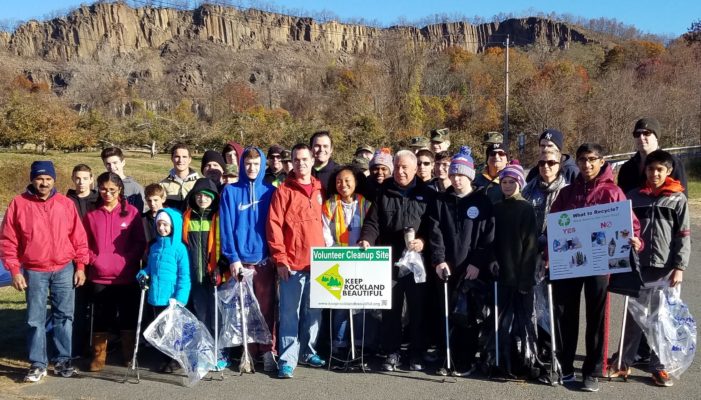 On April 30, Carlucci will lead one of Keep Rockland Beautiful’s Great American Cleanup projects on Route 304 among the feeder streams of the Lake DeForest reservoir. He described the debris there as “an awful lot of plastic, and plenty of single-use bags”—which remain chemically intact even as they break down into tiny particles that foul our waterways and are mistaken for food by aquatic creatures.

The Rockland County Legislature created an ahead-of-the-curve plastic bag recycling law in 2008, requiring large chain stores that hand out single-use bags to have recycling bins on site and to take out their own and other plastic bags, wrappers and film, which are not accepted for curbside recycling in our county. The challenge is letting people know that they should bring it all back to the store and getting them to do it. Even if they do it, only a very sad 14% or so of the stuff actually ends up getting recycled.

For serious single-use plastic-bag reduction, fees and bans are the only proven way to get the job done. When former County Legislator Connie Coker of South Nyack tried to introduce a bag-fee bill in 2010, along the lines of Ireland’s very successful program, there simply wasn’t enough support among legislators of either party to carry it out. “We tried, but in the end, had to settle for publicizing the 2008 recycling bill,” said Coker, who hopes that the state legislature will step up in a year’s time and create a single-use plastic-bag ban for New York. 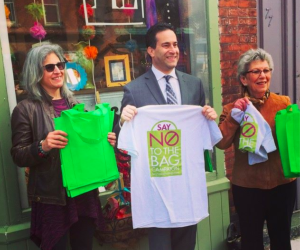 Rockland County Legislator and Environmental Committee member Alden C. Wolfe says that it will take grass roots support—a community consensus—to get a county bag ban successfully introduced and passed, which he favors because “we use plastic like it grows on trees, and doesn’t hang around for 1,000 years.” While waiting for that consensus to build, Wolfe has done what he can to fight the plastic tide. He sponsored a 2008 bill that bans polystyrene foam (or “styrofoam,” which isn’t recycled here) in all county-run food service settings.

Here in Nyack, longtime anti-single-use-bag campaigner Maria Luisa Whittingham (of Maria Luisa and ML on South Broadway, a sponsor of this column) is collecting signatures on her “Say No to the Bag” petition at change.org, for which she also collected a 2015 Rockland County Legislative resolution supporting her effort.

The designer and boutique owner hopes to kick her campaign up another notch, recruiting local merchants to take the “Say NO” pledge, and ask their customers (as she herself does): “Do you NEED a bag today?”

In fact, building a consensus for a plastic-bag ban in our county may need to happen in just this grassroots way: one customer at a Nyack shop, one little kid eating lunch (and the parent who packed it) at the Blue Rock school, a teenager on a Keep Rockland Beautiful cleanup, diners at an upscale eatery who don’t want a side of plastic in their Chilean sea bass, and everyone else who’s sick of plastic litter.

Unless lawmakers and elected officials hear their constituents—loud, clear and often—demanding an end to single-use plastic bags, they’ll have no incentive to act against powerful political and industry forces, and nothing will change . . . except, of course, for more pollution from more plastic bags. 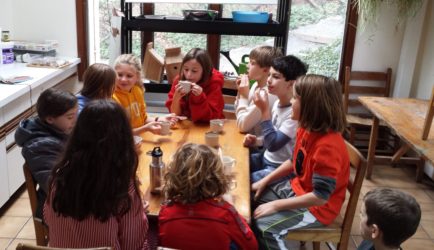