President Donald Trump’s travel ban has caused a lot of confusion. At airports, at embassies, at the Department of Homeland Security and in the media. So we are offering a simple illustration and a few news notes to set things straight.
Seven mostly Muslim nations are banned. But most mostly Muslim nations are not. We’ve teamed up with cartoonist Dan White to illustrate the difference. 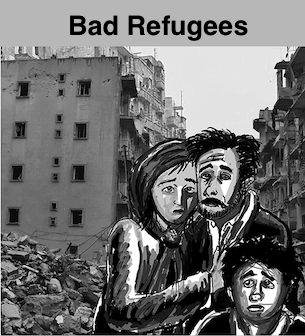 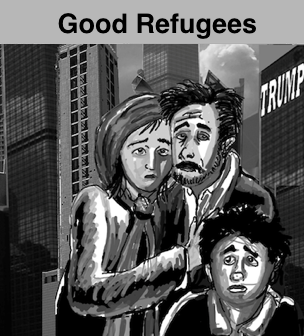 When a Ban Is Not a Ban

The administration has insisted it isn’t a “muslim ban.”  But this contradicts statements made by  presidential candidate Donald Trump 14 months ago on his website. “Donald J. Trump is calling for a total and complete shutdown of Muslims entering the United States until our country’s representatives can figure out what is going on.” — DonaldJTrump.com, 12/7/2015
There are also statements by his supporters which confirm the goal of the ban is to focus on members of one particular religion. “Former New York mayor Rudolph W. Giuliani said President Donald Trump wanted a ‘Muslim ban’ and requested [that Giuliani] assemble a commission to show him ‘the right way to do it legally’.” — Washington Post via Chicago Tribune, 2/11/2017

How Do You Tell a Bad Refugee From A Good One?

All of the countries included in the ban have majority Muslim populations. And the president cited terrorism as the reason we needed to immediately stop turn away thousands of people who have already been vetted by an extensive — and apparently effective — 18-month multi-agency security screening which has allowed zero terrorist attacks by immigrants from any of the seven countries.
Trump said he was motivated by the memory of 9/11, but 15 of the 19 the September 11 perpetrators were from Saudi Arabia, a majority Muslim country that was *not* on the no-travel list.
During 2015,  the Trump organization registered eight companies in Saudi Arabia. Despite the fact that Osama bin Laden was born in Saudi Arabia — and that Donald Trump called Saudi Arabia the “world’s biggest funder of terrorism” in 2011, it escaped being placed on the list.
Should Saudia Arabia have been included? No; it’s not fair to prohibit millions of people from coming to the United States and have no connection to terrorism just because they practice a different religion and some of their fellow citizens are “bad hombres.” Unless, of course, they live in places that don’t have Trump investments, like Iran, Iraq, Libya, Somalia, Sudan, Syria or Yemen.