by Susan Hellauer
In an emergency, you can survive without most utilities—electricity, gas, garbage pickup and, yes, even the internet. But without one basic utility—potable water—you can count your remaining days on one, maybe two hands.

In most urban and suburban areas, the drinking-water supply is protected, processed, and delivered by public servants who collect just enough fees to sustain the operation. But about 10% of municipalities worldwide have either leased or sold their drinking-water treatment and distribution systems to private, for-profit companies. Some of these—like Suez Water New York, Inc. (Suez-NY), which owns the reservoir and drinking water infrastructure they operate in Rockland County—are part of multinational mega-corporations. Subsidiaries like Suez-NY must not only deliver a product that meets local health standards, but must also deliver, month after month, an attractive return on investment for their shareholders.
That bright line between shareholder demands and consumer needs got a little brighter on January 24, when the New York State Department of Public Service (PSC) Commissioners ruled on a proposed rate case presented a year ago by Suez-NY. On the conservation side, the outcome evoked both praise and disappointment. On the monetary side, it left water activists, county officials, and local ratepayers steaming. So, who won this water war?

How we got to Suez Water 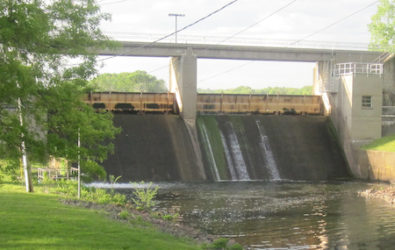 Rockland County’s long-term relationship with private drinking-water suppliers dates back to 1893, with the Spring Valley Water Works and Supply Company. It was acquired in 1900 by New Jersey’s Hackensack Water Company, which continued to grow and acquire water systems.
In 1983, Hackensack changed its name to United Water Resources, Inc., and in 1994 took over General Waterworks Corporation. In that deal, GWC’s principal owner, French water company Lyonnaise des Eaux Dumez, got a 26% stake in United Water. Lyonnaise merged with the French Compagnie de Suez in 1997. And in 2000, the new entity engineered a $1.02 billion buyout of United Water.
United Water took the Suez name in 2015, and is now a subsidiary of Suez Environnement, a French multinational water- and waste-processing concern with annual revenues of $17 billion. Suez-NY has about 300,000 Rockland County customers, with the rest served by private wells and two public systems, the Village of Nyack Water Department (for Nyack, South Nyack, West Nyack and Central Nyack), and the Suffern Water Department.

In December of 2006, a potential water shortage led the PSC to ask then-United Water to investigate remedies for Rockland, including an additional reservoir. Barely one month later, United Water presented its option of choice: a desalination plant on the Hudson River at Haverstraw Bay,  just a few miles downriver from the Indian Point nuclear reactors.
Public outcry was fast and loud against the proposed plant: it was seen as expensive and unnecessary in a county that gets 50 inches of rainfall per year. A grassroots group, which included Laurie Seeman (whose Strawtown Studio is a sponsor of this column), George Potanovic, Jr., and the Rockland Sierra Club’s Peggy Kurtz, created and led the Rockland Water Coalition in 2007 to fight the plan. Environmental and municipal groups soon joined the fray. 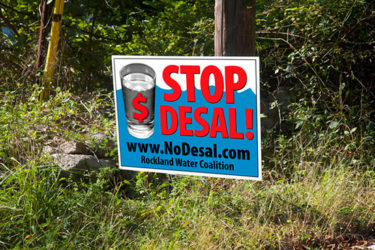 United Water’s own reporting to the PSC from at least 2007 showed level or falling demand, despite population growth. To the Water Coalition, this pointed to solutions based on water conservation, leak reduction and smaller supply sources, not desalination. Yet these opponents were also aware that the proposed plant would pay a healthy long-term dividend to Suez shareholders as a capital investment—something that wouldn’t be achieved by conservation and repairs to leaky water mains.
In a hard-fought David and Goliath victory for the Water Coalition, the PSC  finally ordered that the desalination proposal be dropped in late 2015. But Suez-NY expected Rockland ratepayers to pick up the check for the never-built project’s planning expenses of $62 million. This sparked outrage among desal opponents, who saw these expenses as a burden to be borne by the corporation and its shareholders, and not by its customers.
On June 27, 2016, County Executive Ed Day held a “had it up to here” press conference to announce the filing of an Article 78 lawsuit in NY State Supreme Court against the PSC and Suez-NY. The suit claims that the PSC failed to verify all of the charges Suez presented related to planning costs for the desal plant that wasn’t needed or wanted. Day insisted that these charges are not just and reasonable. “Rockland ratepayers are being hosed,” he added.

The money part: time to pay the piper 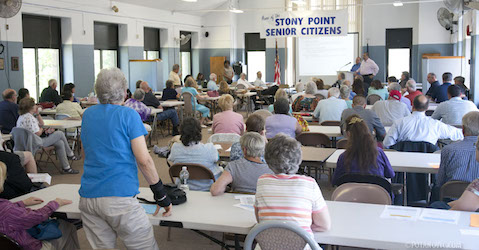 The PSC Commissioners’ ruling handed down last week made modifications to both the requested rates and the conservation measures agreed upon between Suez and the PSC staff—something rare, if not unheard of, according to Rockland water activists.
The modified settlement—a three-year agreement—was accepted unconditionally by Suez-NY before the January 27 deadline, and the new rates went into effect on February 1.
The immediate rate rise was addressed by Suez-NY in a brief statement on February 1: “The agreement will increase the monthly bill for an average residential customer by 51 cents in 2017, $4.80 in 2018 and $4.87 in 2019.” For the average Rockland customer, that works out to $122 more over the next three years.
Although the PSC reduced the desal-planning reimbursement, the agreement will still cost Suez ratepayers $53.6 million over the next 15 years (plus about $26 million in interest), according to Dan Duthie, an attorney representing the Municipal Consortium: several towns, villages and school districts in Rockland County working closing with the Water Coalition, Sierra Club, Riverkeeper, Scenic Hudson and other parties to the rate case.

The conservation part: time to fix the pipes

The most significant modifications to the Suez proposal involve water conservation. 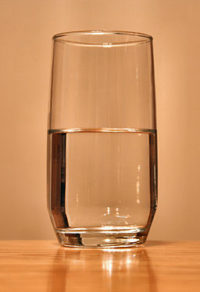 Suez had originally proposed a water recovery goal of 2 million gallons per day (mgd) by a combination of conservation and reduction of “non-revenue water” lost to leaks, theft, firefighting, etc. That was increased by the PSC to 3 mgd, along with financial incentives to help meet that mark. Advanced metering systems, to be installed in the near future, should make it easier to find and fix system losses.
Water main replacement was increased to 1% a year by 2020 from the low current rate of 0.24%.
A new rate structure designed to encourage conservation will replace the existing summer-winter rate plan. A program of rebates for purchase of water-saving fixtures and appliances, with help for lower-income households, will be developed as part of the deal.
Local activists, including  County Legislator Harriet Cornell, who chairs the Rockland Task Force on Water Resources, are happy that the PSC Commissioners responded to their nine-year fight for stronger conservation measures. But they had hoped for more. “The modified program is a step forward, but we are disappointed that it is not stronger, to achieve the gains that are needed,” said Rockland Water Coalition’s Peggy Kurtz.

According to Rockland County officials: Suez owns the land on which [man-made] Lake DeForest is built, the Lake DeForest dam and water treatment plant, the land on which all of their water supply wells are drilled, all of the mechanical infrastructure used to extract water from the environment (wells, pumps, surface water intakes, etc.); all of the water treatment equipment and materials, and all of the pipes, valves, meters, etc. used to distribute treated water throughout most of the county. They do not own the water itself, but rather have rights to use the “waters of the state” pursuant to water allocation permits issued by the NYSDEC.

Well, it depends whom you ask.
The PSC Commissioners called their ruling “a win for Suez customers” because it reduces the rate rise requests somewhat, and “encourages Suez to improve system efficiency by implementing cutting-edge, proactive water-loss and conservation management practices.”
Suez shareholders were by no means forgotten. At their Albany session on January 24, the PSC Commissioners made it clear that desalination planning expenses must be repaid by customers in order to protect the bond rating and thus the health of the company. And they insisted that Suez and Rockland County must work together toward conservation and future water security.
But local water activists, county officials, and elected representatives all came out swinging against the desalination planning expense reimbursement.  They see the $53.6 million—almost $79 million with interest—that Suez-NY will collect over the next 15 years as a big win for the shareholders at consumers’ expense, despite some reductions mandated in the modified agreement. “This is a dent in the costs,” said County Executive Ed Day. “It’s certainly not a victory for the ratepayers of Rockland County.”

The county’s Article 78 lawsuit against Suez-NY and the PSC (now pending in NY State Supreme Court) will continue, according to County Exec Day.
State Senator David Carlucci (D-Rockland-Westchester), Chair of the Senate’s Consumer Protection Committee, slammed Suez and the PSC for the rate hikes in a January 24 statement, and said that he will push legislation to create a dedicated utility-consumer advocate to represent the public in rate hike processes. The Journal News echoed the call for an advocate in a January 27 editorial.
Rockland County Water Task Force Conservation Chair Margie Turrin expressed the hope of her colleagues that Suez-NY will return to the organization, or work alongside it, as a partner in conservation. (Suez resigned in 2015, disputing a Task Force-sponsored study that pointed out a lack of infrastructure maintenance for leak control.) When asked this week about the possibility of rejoining the Task Force, a Suez official stated that their comments would be restricted to the February 1 media release.

In early January, a new 501(c)(3) organization, Citizens for Rockland Water, was created to explore public alternatives to private ownership of the county’s drinking water system. “We’ll evaluate the feasibility of each one, decide which one is most doable, and proceed from there,” says board member Laura Burkhardt. The Nanuet resident cites successful local water authorities, like Long Island’s Suffolk County, as models.
Taking water back from a private company—sometimes called “re-muncipalization”—is nothing new. It’s been done about 180 times in the last 15 years, in the U.S. and abroad. In New York State, a local government agency can “condemn” the water treatment and distribution works, but must reimburse the evicted owner for their infrastructure at current replacement cost minus depreciation, according to attorney Dan Duthie. It’s by no means easy: a corporation can be expected to put up a fierce fight against such a loss on behalf of their shareholders, and to work long and hard to increase their settlement amount, if it comes to that.
Even so, it has been done. In 2009, Paris, France took back its water from a pair of private companies—including Paris-based Suez.