In 1991, the United States Environmental Protection Agency (USEPA) issued new, more stringent environmental regulations for landfills. Soon thereafter, small landfills and garbage incinerators throughout New York State began to be shut down. (Rockland County’s Palisades Mall, which opened in 1998, was built on one such area.) These closures were part of a statewide initiative to consolidate municipal waste disposal, replacing local landfills—often poorly maintained—with a smaller number of larger landfills.

These sprawling trash plantations, it was believed, could be more easily monitored and made to meet minimum earth-protecting standards, as well as municipal codes, and the regulations of the New York State Department of Environmental Conservation (NYS DEC).

But this new arrangement brought with it some unforeseen consequences. Garbage-hauling tractor-trailers now roll over roads and highways night and day, multiplying the carbon footprint of every bag of trash. Problems like toxic leachate, air pollution and foul odors are magnified in mega landfills, and must be dealt with on a mega scale for decades—even after a facility closes.

Where does your garbage go? 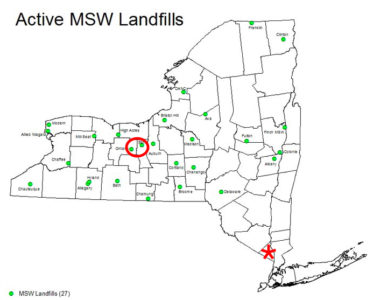 So, where does Rockland County’s garbage now go? Instead of a short trip in a garbage collection truck, those broken Nerf guns and thousands of bags of dog poop are driven in fume-belching 18-wheelers about 270 miles up the Thruway to two of the state’s largest landfills—Seneca Meadows and Ontario County—in New York’s Finger Lakes region.

Although these giant wasteyards bring jobs and tax relief to some economically hard-pressed areas of Seneca and Ontario counties, a number of residents feel that the cost to their health, homes and tourism is too high. They are demanding an end to expansion of these landfills and the odors and pollution they emit.

The Finger Lakes Zero Waste Coalition, founded in 2008, is a group of citizens concerned about the Ontario County landfill and the growing amount of waste it accepts. The group’s president, Douglas Knipple, has written an open letter to Rockland County residents, asking us to think before we throw, because, in the end, our “away”—though far away—is somebody else’s backyard.

A Letter From ‘Away’ Upstate
About Rockland County Waste

Dear Citizens of Rockland County,
Greetings from the beautiful Finger Lakes region, the center of New York’s burgeoning wine industry, source of much of the state’s agricultural production and one of the most desirable and readily accessible tourist destinations in the northeast! Unfortunately, our region also “hosts” two of the largest active mega-landfills in New York State, or “dumps”, as those of us who live nearby refer to them. These landscape-altering monuments to waste, less than fifteen miles apart in Ontario and Seneca Counties, are visible from miles away from multiple vantage points. On the all too frequent bad days, be they winter, spring, summer, or fall, the stench they generate is also detectable from miles away.
You probably are unaware that more than 400,000 tons of waste was trucked from your county to these two dumps in 2015, more than any other single entity, including sources in other counties, the New England states and Canada. Just considering the records for the Casella-operated Ontario County dump for the past four years, we note that the amount of waste sent there from Rockland County has increased every year. Your county deposited 224,810 tons in 2012 and 247,071 tons in 2013, an increase of 22,260 tons. In 2014, over 263,382 tons was deposited, comprising 41% of the total annual amount received that year. In 2015, you sent us 302,967 tons, a 40,000 ton increase, comprising over 46% of the total amount received. We have been informed that the Rockland County Solid Waste Management Authority and other Rockland County entities have undertaken programs to reduce the generation of waste in your county. This nevertheless begs the question of why the amount of waste that gets transported to our region from Rockland County continues to increase every year.
Aside from their aesthetic impacts, which affect our local economy, most notably our tourism industry and local property values, these dumps, filled primarily with other people’s garbage, are major sources of air and water pollution in our region. According to official records from 2011 we calculated that the Ontario County dump and its co-located landfill-gas-to-energy plant generated approximately 34 tons of volatile organic compounds, 30 tons of sulfur dioxide, 95 tons of nitrous oxides, 240 tons of carbon monoxide, 82 tons of non-methane organic compounds and 18 tons of hazardous air pollutants. It is a major point source of greenhouse gas emissions in Ontario County, releasing more than 70,000 tons of CO2 equivalents per year. This dump also generates over 15 million gallons of toxic leachate per year, which results from the percolation of rainfall and snow melt through the dump mass. This leachate is “treated” by diluting it into regional wastewater treatment plants (designed for biological wastes) that discharge into Seneca Lake (drinking water for over 100,000 people) and the Canandaigua Outlet, which eventually empties into Lake Ontario. This air and water pollution increases incrementally as these dumps grow larger and larger with each passing year.
Finger Lakes Zero Waste Coalition has been at the forefront of advocating for waste reduction in our region for the past nine years. Although we have made progress on some issues, we have been unsuccessful in preventing the DEC from permitting recurring expansions at both of these dumps, thereby ensuring the continual importing of waste to our region and increasing environmental degradation for years to come. There have even been serious negotiations with the New York City Department of Sanitation to develop permanent infrastructure to enable the transporting of trash by rail to our region, a development, which, if it were allowed to occur, would all but seal the fate of the northern Finger Lakes as a de facto sacrifice zone for generations to come.
For the above reasons, and because the DEC has shown itself to be ineffectual in enacting statewide waste reduction programs, we have decided to go straight to the sources of the waste coming to our region, and ask for your help. There are two things that you can do. First, in recognition of the fact that garbage follows the path of least political resistance, we ask that you organize to exert political pressure on the Governor’s office and your state legislators to compel the DEC to implement an enforceable waste reduction program, as opposed to its current aspirational “Beyond Waste” policy statement, which we on the receiving end of a seemingly endless flow of trash regard as little more than a cruel hoax. Second, even if you lack the time and energy to become politically involved, there is much you can do as individuals by adopting the four principles of zero waste in your personal lives: reduce your consumption (it will save you money); reuse items or donate them to others who will; recycle clean plastic, paper, cardboard, glass and metal; and, don’t waste food (it will save you money) and, if your circumstances permit, compost vegetal food scraps. If each household in your county were to develop an action plan to implement zero waste principles it would make a real difference. While we will be reaching out to other counties in New York state to consider this issue, your county, in particular, has tremendous potential to reduce the flow of waste to our region.
We hope that this letter raises your awareness of your relationship to our problem and that the next time you throw something “away” you will think about the environmental and economic burdens it places on the communities that receive it. We thank you for considering our concerns. If there is anything that we can do to assist you, please do not hesitate to contact our organization.
Sincerely,
Douglas C. Knipple, Ph. D.
President, Finger Lakes Zero Waste Coalition, Inc.
PO Box 865
Geneva, NY 14456
January 19, 2017

Update: An earlier version of this article stated, in “Learn more,” that Casella also runs Rockland County’s garbage transfer station in Hillburn. Casella’s website showed that they manage it but, in fact, they do not.  1/24/2017.
Email Sustainable Saturday