The Year Began With Sweet Sounds

by Dan Cohen
New Year’s is a special time of year. And so special was this past New Year’s, spent at Maureen’s Jazz Cellar, that I haven’t quite been able to shake it from my mind eleven days after the fact. Maureen’s, presided over by the benevolent Breanne and David Budway, is a cozy spot, made cozier by the season. I spent a good portion of my holiday there, and I’m here to report: live music is doing quite well in Nyack, thank you very much. 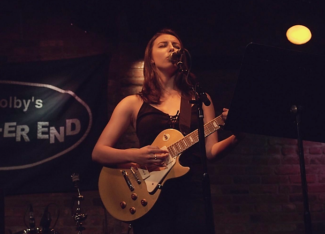 Isabella Rose is homegrown, a graduate of Nyack High School, and relatives and friends were out in force, packing the room and making it feel a little like we were crashing a family Christmas Party. But they didn’t mind. In fact, they were thrilled. Playing her own airy tunes of heartbreak and loss, alone onstage with her guitar most of the night, Rose had something of the willowy presence of a young Joni Mitchell. Her songs are pretty, but her singing sets her apart. This girl’s got a voice and she’s not afraid to use it. Throughout the show, but especially in songs like “Sailing,” which had a nice lilt to it, her voice swooped and soared, not in a show-offy way but more as if she herself hasn’t quite wrapped her mind or her act around the flexibility and range and beauty of her instrument. She’s growing up in public, and she’s taking the audience along on her exploration. Wow, I can do this? Way up here?…What if I gave it a little bluesy trill?
Often singers with a pure, clear, high voice like that don’t sound as good when they sing lower, but Rose has a rich, warm lower register for more bluesy numbers. She did a winning version of the George Jones classic “Tennessee Whiskey.” She had her sister join her for a few gorgeous songs. There’s nothing like siblings singing together. She’s a young artist, her songs can have a sameness to them and sort of blur into one another — I wish she’d write a tune about laundry or fast food or something super concrete. And after a while I was hoping for a rocker, a good-time party song to leaven the mood a little. But I’m sure those songs will come. And when they do, with a voice like hers, we could be hearing from Isabella Rose for a long, long time to come.

As the house band for the post-midnight jam on New Year’s Eve, Bud is Dead welcomed 2017 in with style.
It was a chill, brandy-drinking sort of night; there was a loose, relaxed vibe in the room. There’s nothing quite like watching a band of excellent players ply their trade with nothing to prove, and with a manic moonlight energy they ripped through Motown, rock, and some Dead numbers that I had long ago given up for dead. A smokin’ “Box of Rain.” And a few I couldn’t name but that sounded like the Dead.
Budway was joined by Frankie Colonnato on drums, owner of LI Drum Center of Nyack (is that like Thursday Night Football… on Saturday night??!!!) and Joel Newton on guitar and bass. Both of whom can also play anything. Newton dressed for the night in a raggedy t-shirt and spent most of the set facing away from the audience, so you couldn’t see his spectacular guitar fireworks, but he’s a player to be reckoned with, with a fierce groove and sinuous, loopy, surprising lead style all his own. Colonnato is always neat as a pin. He wears a t-shirt as well, but somehow his looks impeccable. I’m serious. I didn’t realize it was even possible to wear a t-shirt so well. And his beat is equally impeccable, a sweet, steady groove,  not too loud, not too soft, never showy, just right.
They cleared a few tables away to make room for dancing. I danced with friends, neighbors, complete strangers. My friend Kris, a Maureen’s regular, confided to me at one point “I never got the Dead until I heard this band play it!” Then she smiled a naughty schoolgirl smile and put a finger to her lips, like, Don’t tell anyone I told you! But in fairness—it’s true. Free of the shambling, cassette-recorded confines of your typical Dead show, spruced up by Dave’s killer band, the songs gain definition, gain heft, they become rock gems right before your eyes. Budway plays other music — he actually plays all stuff all the time, and all with utter brilliance– but there’s a special place in his heart for the Dead, and when he plays it, he’ll make one in yours. I got home about 4am, feeling just fine. So 2017, welcome.  This, I think, will be a year to wake the dead.