by Jocelyn Jane Cox
What does it mean to be nasty? It can mean a lot of things, but right now, it mostly means being a woman in this country who is part of the resistance against sexism. The fight against misogyny in America is taking many forms: marches, rallies, and…also art exhibits, like the Nasty Women Art Exhibit at Festoon on Main Street in Nyack this Friday, Jan 13. This is a sister location of a worldwide event that New York City artist Roxanne Jackson is organizing in response to the election.
Jackson’s exhibit, which will also be held in Queens this weekend, is being promoted as “…a group exhibition that serves to demonstrate solidarity among artists who identify with being a Nasty Woman in the face of threats to role back women’s rights, individual rights, and abortion rights. It also serves as a fundraiser to support 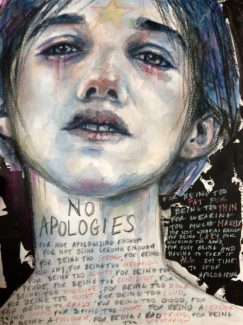 organizations defending these rights and to be a platform for organization before the Trump Presidential Inauguration.” She has encouraged like-minded people to organize these all over the country and the world.
The connotation of the word nasty, in case you’ve forgotten, changed during the third presidential debate. In response to Hillary Clinton’s remarks about Social Security, the president-elect said into the microphone, “Such a nasty woman.” Almost immediately, #NastyWoman became a battle cry on social media and a term of solidarity.
Kris Burns, who is the owner of Festoon, and also an artist and activist, has taken up this battle cry. She is proud to be featuring local “nasty artists” in her store from the opening (Friday at 7p) through the end of the weekend (Sunday Jan 15).
“I re-watched the footage of that debate.” Burns said, “He was trying to silence her. As women, we’ve all had the experience where we’ve been quieted or disrespected. His treatment of women is antiquated, and yet his misogyny has been tolerated and even celebrated.”
This is one of many reasons why Burns joined up with this artistic movement. “I want to amplify voices and be an amplifier,” Burns said. “So many of us are heartbroken and angry.”
Meryl Streep, in her Golden Globe acceptance speech, touched on this vulnerability and the need to act. She said, now famously, “Take your broken heart and make art.” Burns echoes the sentiment. “I take solace in the arts, I believe that poetry and visual arts can help us all better understand.”
She hopes that this event will be a helpful gathering place before the inauguration: “a place where people can ask each other things like, What is your plan? What are you doing next? Which march are you going to?”
She also hopes that a lot of people will come out and purchase art, since all proceeds will go to The Center for Safety and Change, a center in Rockland County serving victims of domestic abuse, sexual assault, and other violent crimes. All art will be sold for $100 or less and available on a cash-and-carry basis. In other words, when you purchase a piece of art, you will take it right off the wall and go home with it.
The exhibit will feature local artists Jennifer Bourne, Shawna Handke, Lauren Rudolph, Heidi Normand, Jamie Baldwin Gaviola, Haile Shawna Binns, and Jill Brodeur, among others. Art submissions are open and will be taken through Thursday, Jan 12 at 6p.
Image: “No Apologies” by Lauren Rudolph
ImageSave
Save
Save
Save
Save
Save
Save