If you walked down Main Street in Nyack in early December, you might have seen a display in the window of Festoon flower shop that caused you to stop and think. What was playing through a projector were scenes from the classic Christmas film, It’s a Wonderful Life, interspersed with footage from the Selma marches, the 1965 civil rights movement in honor of voting rights for African Americans. This was not your typical holiday arrangement. But then, Festoon isn’t your typi 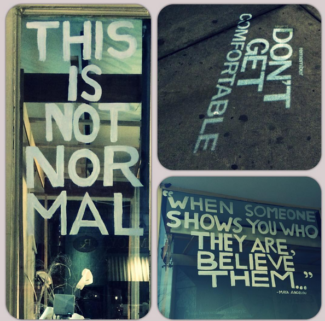 cal flower shop.
Kristina Burns, who opened the shop last May, has long been an artist and an activist. Inside, her store is adorned with beautiful flowers and a variety of “finds,” such as jewelry, art, beauty products, antiques and reclaimed objects.
Her window display was an unapologetically political statement about this past holiday season, and, yes, a direct reaction to the results of the November election. “It feels schizophrenic. The holidays are incredibly joyous. I usually love this time of year, the way people light up their places and take pride in their homes. But you listen to the news right now about the cabinet picks and Aleppo…it’s terrifying.”
She continued, “With It’s a Wonderful Life, you have a family making Christmas and communities coming together. Fates are tied to each other. Which is all true. But at the same time, there is a need for resistance.” She was inspired by the Selma Marches. “We’re going to have to have perseverance, unity, and optimism. And people have definitely faced more difficult times than this.”
Burns worked for both Obama campaigns and has felt a real sense of pride in America in the last eight years. “For the first time,” though, she said, “I feel like an outsider in my own country.”
Of course, she understood the risk of taking such a political stance. But, this isn’t the first time she has done so. Right after the election, she had her window painted with the words THIS IS NOT NORMAL and a quote from Maya Angelou: “When someone shows you who they are, believe them.” Onto the sidewalk, she projected, “Don’t get comfortable.” After the Orlando shootings, she suspended 49 peonies hanging from bottles and projected the names and photos of the victims. Over time, the petals fell and scattered to the ground.
She said that she hasn’t gotten any negative feedback from people about her windows. “I wouldn’t be surprised if people decided to not come in because of them.” But that would’ve been fine by her. “I don’t want to be preachy or negative. We just need, more than ever, to see what’s happening. And not normalize him [Trump].” Regarding the display she put up right after the election, “That window seemed to have a broader reach than I even realized. People came back to look at it a few times, as if it was a touchstone.”
Burns has committed herself to the community in other ways that makes her storefront more than a retail operation. For example, a portion of all Festoon purchases benefit local non-profit organizations such as The Nyack Center, the Center for Safety and Change, and Rockland County Pride Center.
Burns has taken the Slow Flowers pledge, meaning that all the flowers sold at Festoon are American-grown. In fact, almost all flowers are grown within 50 miles of the store, in New Jersey or Connecticut, even in the middle of the winter. Furthermore, Festoon features the artwork and jewelry of local artisans and she aims for everything in the store to be American made.
“Basically,” Burns said, “If I don’t believe in it, I can’t sell it.”
The feeling of the store is cozy and eclectic with everything arranged creatively, almost like a set design for a folktale. Adults and children are invited to sift through a large treasure jar for odds and ends like buttons and bobbles. And you can pick up a variety of gifts for your loved ones, or yourself.
The holidays are through but Burns’s store will continue selling pretty flowers and creative treasures on Main Street USA — and also continue taking a stance. “The most important thing to me right now is to not be part of the forgetting. I think we have to be very clear about who are and what we believe in.”
Save
Save
Save
Save