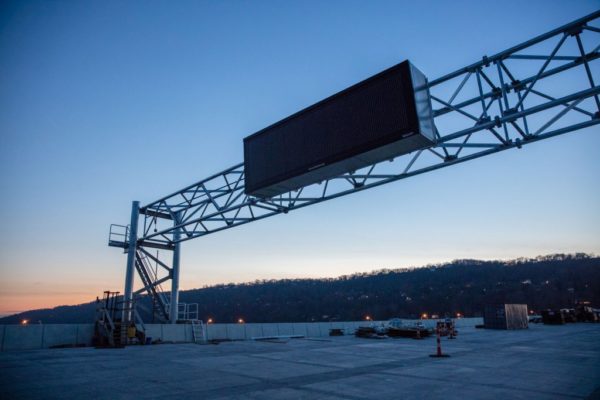 How Technology Will Reduce Traffic and Keep Motorists Safe

They tower over the river at 419 feet tall at an ever so slight but very obvious five degree angle. Their iconic design is what makes the new TZB visually unique.
Last week, New York State Governor Andrew Cuomo was on site to commemorate the final pours for the eight main span towers for the New New York Bridge (NNYB). “Replacing the Tappan Zee Bridge with such a magnificent structure sends a powerful message to the world that nothing is too big or too difficult for the Empire State,” said Cuomo.  The NNYB towers are 100 feet higher than the top of the current Tappan Zee Bridge. “The new bridge will be built for the ages and strengthen our region’s infrastructure for generations to come.” Cuomo’s appearance on Tues Dec 13 was just two days before the current Tappan Zee Bridge celebrated its 61st birthday. Demolition of the legacy TZB will begin after the north span of the new bridge opens in 2017.
Both spans of  The New NY Bridge are on track to open in 2018 on budget at $3.98 billion. Approximately 90 percent of support structures on the bridge have been placed, including 126 steel girder assemblies. But there’s more than just concrete and cables behind the new Tappan Zee Bridge. Construction workers recently installed the first of 18 overhead gantries, which will be equipped with enhanced technology to help keep traffic moving safely and efficiently on the new bridge.
Intelligent Transportation Systems (ITS) will improve traffic safety and mobility by monitoring conditions on the twin-span crossing and automatically informing New York State Thruway Authority staff of any disruptions. This will allow for quick and concise communication with motorists through the bridge’s overhead electronic signs, and similar signage on its Westchester and Rockland landings.
These signs will inform motorists of accidents and direct them away from closed lanes, helping drivers to avoid last-second lane shifts, thus reducing the potential for other incidents. 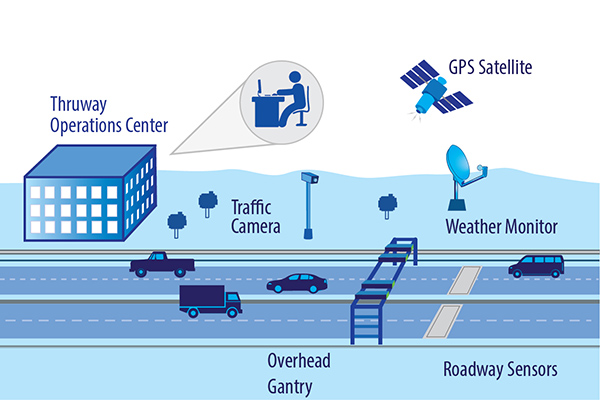 Many ITS elements will combine to form a robust transportation network.

ITS will also serve as a valuable communication tool between the Thruway Authority, law enforcement, first responders and tow truck operators. By alerting emergency personnel as quickly as possible, the impact of lane closures and accidents can be minimized.
The new bridge’s ITS will connect to the NYS Thruway’s larger traffic management network to help synchronize various operations, including maintenance and repairs. Additionally, during the winter months, the state-of-the-art system will monitor pavement conditions in real-time so roadway treatment and snow removal operations can function more efficiently. These enhancements have been shown to minimize delays to motorists, allowing the public to get the most out of its investment in roads and bridges.
Other ITS elements on the new bridge include traffic cameras, roadway weather systems, and emergency phones. These phones will be placed along the shoulders of the twin spans as well as on the shared-use bicycle and pedestrian path for those who need assistance.
Many of these ITS elements, including the overhead signage, are designed to make long-term maintenance efforts more efficiently while minimizing disruptions to traffic. Specially-designed gantries, ladders and walkways will also allow workers to safely perform certain routine maintenance without the need to close travel lanes.
Source: NewNYBridge.com