Water is life, but oil is money.

Closer to home, a private-enterprise energy pipeline company is now seeking permits from both New York and New Jersey to run a two-way raw and refined petroleum pipeline between Albany, NY and Linden, NJ.  Like DAPL, it’s also slated to run through sensitive water-supply areas.

Here are the essential questions and answers about the Pilgrim Pipeline and how it is, and is not, like the doomed-for-the-moment DAPL.

How long have oil pipelines been around?

Oil pipelines in the U.S. are almost as old as the first productive well, which was drilled in Pennsylvania in 1859. The “oil rush” immediately brought with it the problem of moving the black gold to refineries and markets.

The first deliveries of crude oil were hauled by horse-drawn “teamster” wagons to river boats and railroads, which brought petroleum to refineries and markets. By 1865, pipelines were carrying oil from well fields. Teamsters objected and protested—often violently—as their livelihoods were threatened by this “job-killing” new technology.

Today, the nation’s subterranean transit grid of gas and petroleum pipeline has grown to nearly 2,700,00 miles, and would reach to the moon and back more than five times.

What is the Pilgrim Pipeline, and where is it in the approval process?

Pilgrim Pipeline Holdings LLC is proposing to construct a pipeline to move crude oil and refined petroleum (up to 400,000 barrels per day) through twin 20-inch pipes spanning 170 miles from Albany to Linden, NJ. The crude oil would move south to Linden, where it could end up at a refinery or be shipped overseas. Refined products, like gasoline, jet fuel and heating oil, would move north to Albany.

The pipeline would use the NY State Thruway right-of-way for 79% of its run, and pass through private and public land in six counties and over 30 cities, villages, and towns in New York, and 30 more communities in New Jersey. Several lateral pipelines would run out to tank farms on the Hudson River shore.

The pipeline would transit the Hudson River twice, and cross 232 regulated streams. Pilgrim’s own documents show that it would make 296 wetland crossings as well.

The light crude oil to be moved by the Pilgrim Pipeline comes from the Bakken oil fields of North Dakota and Canada—the same product that would be moved by the DAPL to refineries in Illinois and beyond.

No permits have yet been issued to Pilgrim by either New York or New Jersey. In September 2016, in response to a Pilgrim’s application, the NY State Department of Environmental Conservation (NYS DEC) issued a “positive declaration,” requiring a full environmental impact study of the entire route through the state. The lead agencies in charge of this study are the New York State Thruway Authority (NYSTA) and the NYS DEC operating under the State Environmental Quality Review Act (SEQRA).

Native Americans and their supporters at Standing Rock, in North Dakota, appealed to a federal agency (the Army Corps of Engineers) to stop the DAPL. Will the feds also play a role in approving or denying the Pilgrim Pipeline’s proposed route?

No. Although the Federal Energy Regulatory Commission (FERC) gets involved in the approval process for gas pipelines, the siting of pipelines that move crude oil and refined petroleum products must be approved by the state or states through which they run. If a proposed energy pipeline would cross a water body supervised by the Army Corps of Engineers (ACE) for a flood control or other project, the ACE must grant permission (an easement) for that crossing. This is true for DAPL, but not for the Pilgrim Pipeline.

Is the Pilgrim Pipeline supposed to transit Rockland County? Will it cross or pass near any drinking water sources?

Yes and yes. It would cross the western edge of the county, through parts of the critical and very sensitive Ramapo groundwater well fields. These wells, charged by the Ramapo River, are the source of most of the raw drinking water processed by SUEZ NY, which serves about 300,000 Rockland residents.

The pipeline would also pass close to Ramapo’s Potake Pond. SUEZ can tap this pond to raise the water level in the Ramapo River, which charges the groundwater wells. This became necessary during last summer’s drought and water shortage.

Are Rockland County and SUEZ NY concerned about the Pilgrim Pipeline? 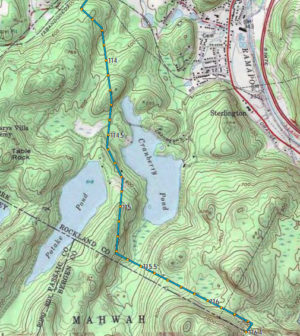 Dr. Daniel Miller, Water Supply Program Manager for the Rockland Department of Health. responded to my inquiry with a statement by email:

The Rockland County Department of Health (RCDOH) is always concerned about potential threats to our water resources. The proposed path of the Pilgrim Pipeline warrants a thorough analysis of the potential impacts to our drinking water supply. Since the lead agencies have issued a positive declaration, an Environmental Impact Statement (EIS) must be prepared pursuant to SEQRA to assess potential environmental impacts, and to evaluate alternative approaches and possible mitigating actions. Rockland County intends to participate in the SEQRA process as warranted to ensure our concerns are identified and addressed during the environmental review.

Officials at SUEZ NY also replied with an emailed statement:

We are monitoring the planning of the Pilgrim Pipeline project. We will review the DEIS [Draft Environmental Impact Statement] when available and comment if appropriate.

Can Rockland residents themselves be part of the approval process?

Yes. Riverkeeper, the Hudson River environmental watchdog group, and other grassroots organizations who oppose the Pilgrim project, like the Coalition Against the Pilgrim Pipeline (CAPP) and the mid-Hudson group Citizens for Local Power, have information about the pipeline, the approval process, and ways to register an official objection or take other actions.

Residents who oppose—or favor—the pipeline can write to the NYS DEC to express their opinion.

Petroleum pipeline companies and their supporters assert that pipelines are the safest way to transport both crude oil and refined petroleum products. So why wouldn’t we prefer pipelines to the dangers of crude oil “bomb trains” that can explode and to barges on the Hudson River that could collide or run aground and devastate a waterway? 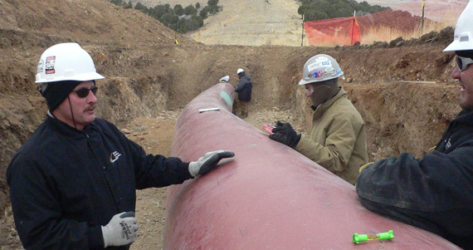 Gallon for gallon, there’s no dispute that pipelines are the safest way to transport raw and refined petroleum. But slow leaks, ruptures and explosions do happen. When they do, the lost amount of petroleum, running under high pressure, can be enormous, as recent incidents in Ohio, Santa Barbara, and the exploding Colonial Pipeline in Birmingham, Alabama demonstrate.

Pipelines elicit fear, at least in part, because slow leaks in deep-buried pipe can be hard to detect and repair before enormous damage is done. Just thinking about a leak in a high-pressure pipeline carrying jet fuel below a drinking water source is enough to get most people’s attention.

Watchdog groups insist that the Pilgrim Pipeline would increase, rather than reduce, the number of “bomb trains” carrying Bakken crude through New York State. Pilgrim disputes this.

We won’t be ready to flip the switch on a grid-free energy life any time soon, so shouldn’t we build more of these relatively safer pipelines to move fossil fuels in the meantime?

Environmentalists have a ready answer for this one: “Keep it in the ground!”

Author Bill McKibben, co-founder of the nonprofit 350.org, was asked in a recent Bloomberg BusinessWeek article about the stance of environmental and clean energy activists against petroleum pipelines. He pointed out that the environmentalists’ fight is about more than preventing leaks:

The imperative need is to wean the world fast off fossil fuels—this is the hottest year our planet has ever recorded, with record-low polar ice for the date, with massive droughts and floods. When we build new fossil fuel infrastructure we condemn the nation to another 40 or 50 years locked into the current way of doing business.

What features does Pilgrim cite when arguing that their pipeline will be safe enough to run through or near drinking water sources? 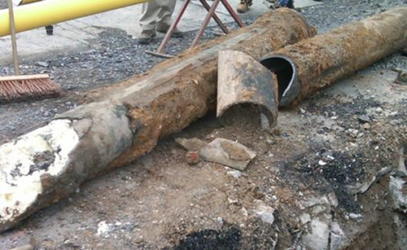 Officials at Pilgrim Pipeline Holdings LLC responded by email to a request for information with extensive detail about the safety features of the proposed pipeline, especially with respect to sections that run under water. Some highlights:

Pilgrim will be built as a cutting-edge example of modern pipeline technology, incorporating automatic shut-off valves, computerized internal scanning, and a host of other modern advancements that diminish concerns relating to pipeline aging.

The Pilgrim Pipeline will be constructed of high tensile strength steel, the highest quality steel pipe on the market today.

To protect against external corrosion, the pipe will have a fusion bonded epoxy coating. . .  all welds are x-rayed to make sure that the welding is done properly . . .

Before being put into service, the pipeline is pressure tested at 1.5 times normal operating pressure for any potential leaks. Once the pipe is placed in the ground, automated inspection devices known as “smart pigs” . . . are run through the pipe to record information about the internal conditions of a pipeline. . . .

In particularly sensitive areas such as water body crossings, automatic shut-off valves will be placed on either side of the water body to significantly limit spills in the event of a breach . . .

Can New York State halt a project that crosses through two states, like the Pilgrim Pipeline?

Yes. And in fact, New York has recently done so in the case of a pipeline planned to carry fracked gas to New England markets from Pennsylvania. The pipeline would have crossed under about 250 water bodies in New York (which banned natural-gas fracking in 2014).

Clean-energy states can pose significant barriers to neighboring fossil fuel-friendly states trying to move products via pipeline. Railroads, however, are under federal control, with long-standing rules against local interference with interstate commerce, including attempts to prevent transport of hazardous materials through densely populated or environmentally fragile areas. Will the Trump administration, which is full of petroleum boosters and magnates, seek similar federal rules for interstate energy pipelines? It won’t be long before we find out.

Documents pertaining to the permitting process, and many FAQs are available on the Pilgrim Pipeline website.

Riverkeeper, which opposes the project, has resources on the pipeline plans, including background on the individuals, corporations and lobbyists behind the Pilgrim Pipeline.

The NYS DEC has a Pilgrim Pipeline page.

“Oil and Water” in M.I.T’s journalism outlet Undark discusses the recent history of oil pipelines in the U.S.