The December 17 Sustainable Saturday column, Pilgrim Pipelines Q&A, included a comparison between the proposed NY/NJ crude oil pipeline and the Dakota Access Pipeline. DAPL made headlines on Dec. 4 when the US Army Corps of Engineers halted work on the nearly-complete North Dakota project pending a thorough study of its potential impacts on the environment and on the drinking water source of the Standing Rock Sioux Native American reservation.

The statistics cited in the article regarding the relative safety of oil pipelines vs. rail and barge transport were drawn from interviews with officials, website material, and two federal agencies: the Federal Energy Regulatory Commission (FERC) and the Pipeline and Hazardous Materials Safety Administration (PHMSA). These sources also provided information on the approval process (state vs. federal) for different kinds of energy pipelines.

Comments came in immediately from local and regional opponents to the Pilgrim Pipeline. They disputed the numbers that seem to show a better gallon-for-gallon safe-delivery record for crude oil pipelines vs. rail and barge transport, as well as aspects of the state and federal approval process.

Because it’s likely the Pilgrim Pipeline will be a contested local issue—traversing drinking water sources in Rockland County and elsewhere on its proposed route from Albany NY to Linden NJ—we’ve invited Stephen Q. Shafer of Saugerties, NY,  to expand on his comments this Guest Op Ed on the safety record of oil pipelines. 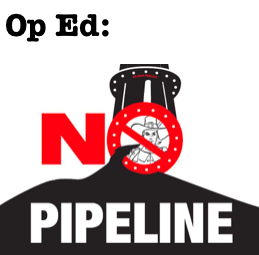 Susan Hellauer’s informative article Dec 17 on petroleum pipelines shows a lot of background work. The writer cites numerous links for curious readers, very helpful. Unfortunately, on this complex topic, even “deep dives” come up with wrong information that must not go unremarked.

She writes that “Gallon for gallon there’s no dispute that pipelines are the safest way to transport raw and refined petroleum.” To the contrary, there is much dispute. It hangs on the meaning of “safety.”

If safety is defined by the total of human fatalities in the world, then pipelines compared to trains, trucks and tank vessels are the least safe.  In 1998 in Jesse, Nigeria 1000 persons died in a pipeline fire; in 2013 in Qing Dao China, 55 were killed in a crude oil pipeline explosion.

If safety is defined by the total of human fatalities in North America in the last 40 years, oil trains are less safe than pipelines because of the 2013 accident in Lac Megantic, Quebec.

If safety is defined by the total of human fatalities in United States  in the last 40 years, pipelines (34 fatalities since 1975)  are much less safe than trains.

If safety is defined as total volume of crude oil spilled per year onto north American ground or water,  pipelines (average of  80,000 barrels per year spilt 2007-2015)  are far less safe than trains. Trains report more “incidents,” but from 2004-2012 spilled only 8.6 barrels per billion barrel-miles moved while pipelines spilled  26.9  barrels, three times as much. (For a good discussion go to p 136 of this 2013 report from the International Energy Agency.)

Barges are safer by any measure–-fatalities, total annual spill volume or spills per billion barrel miles–than either rail or pipeline. From 1998 to 2007, pipelines spilled 27.4 bbl per billion barrel-miles, compared to 5.3 barrels for tank vessels (tankers or tank barges). (See text p 35 of this report done in 2009 for the American Petroleum Institute.) To call petroleum  barges on the Hudson River “accident prone” in comparison to pipelines is unjustified. The last big (190,000 gals of kerosene) leak from a fuel barge into the Hudson River was in 1990;  the last one of any size (never quantified, but termed small) was in 2005.  All barges on the Hudson are now double-hulled, unlike the one that leaked in 1990. In contrast, when the Keystone pipeline had been less than a year in operation in 2010,  it had already had eleven leaks, though  builders had  forecast only one every seven years.  The Associated Press reported in late October 2013 that North Dakota had experienced 292 pipeline leaks in the previous 22 months. Very few had been reported to the public. Most were small (average 177 gallons = 4.2 bbl).

For oil transportation, rail is safer than pipeline by some definitions; pipeline looks better by others. To say “there’s no dispute” is wrong. 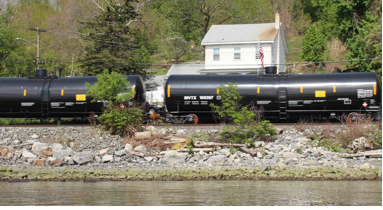 This next theme will surprise many readers: regarding the  proposed Pilgrim pipelines, comparisons of pipeline to rail “safety” are  irrelevant to the proposed route. Pipelining crude from Albany to Linden would not reduce demand for the crude oil unit trains (AKA“bomb trains”) that traverse Orange and Rockland Counties into Northern NJ. These trains do not go from Albany to Linden; they come from the west through New York State, heading to Philadelphia. The only mode of petroleum transport to which an Albany-Linden pipeline might be comparable in terms of safety and utility is barge. Rail or truck are not in the picture between those two points.

Regarding the comprehensive plan of the “Pilgrim New York,” however, “bomb trains,” with all their known liabilities and drawbacks, do have a huge and essential  role. They would bring to Albany every barrel of crude that the pipeline would transmit,  projected to be 200,000 per day. The pipeline would be 100% dependent on crude by rail. The oil would have to arrive every day in Albany at twice the highest daily rates ever seen there (in 2013-early 2014).  The rate of delivery into Albany from two rail lines running hundreds of miles through New York State would have to rise from near-zero barrels per day (typical of the last five months of 2016) to 200,000 bpd.

This sustained and giant increase of crude-by-rail into Albany is why, as the article correctly says, ”Watchdog groups insist that the Pilgrim Pipeline would increase, rather than reduce, the number of ‘bomb trains’ carrying Bakken crude through New York State.”

Stephen. Q. Shafer MD, MA, MPH is a retired Clinical Professor of Neurology, Columbia University with career-long interest in public health and social justice. He is a former vice-president of Friends of the Earth Foundation.  Life members of the Sierra Club, he and his wife are active in the all-volunteer nonprofit group Coalition Against Pilgrim Pipelines NY (CAPP).  They live in Saugerties, NY.