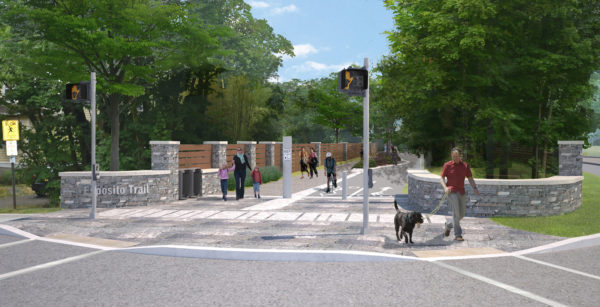 Following South Nyack’s overwhelming endorsement of Shared Use Path plan “Alternative F” in March, the New NY Bridge project team has been working with Mayor Bonnie Christian and the village’s Tappan Zee Bridge task force on the design of the Rockland end of the shared-use path (SUP). Earlier this month, village residents received a detailed look at the SUP and parking facility that will open following the completion of the new twin-span bridge in 2018.
Connecting to Tarrytown more than three miles away, the bike and pedestrian path on the Rockland side of the bridge will terminate at a visitor’s pavilion with parking for 55 cars on state Thruway Authority land at Interchange 10. A side path for bicyclists will run alongside part of the Esposito Trail and end at the corner of Clinton Avenue and South Franklin Street. Safety improvements are planned for several intersections in the area as well.
More than 80 village residents viewed renderings and detailed graphics during a South Nyack Board of Trustees meeting held earlier this month at Living Christ Church in the village. Landscape architect Kathryn Wolf presented the design of the SUP terminus, which will be accessible to vehicles from Route 9W North. Representatives from the New NY Bridge project team also were on hand to answer residents’ questions in the “open house” segment. 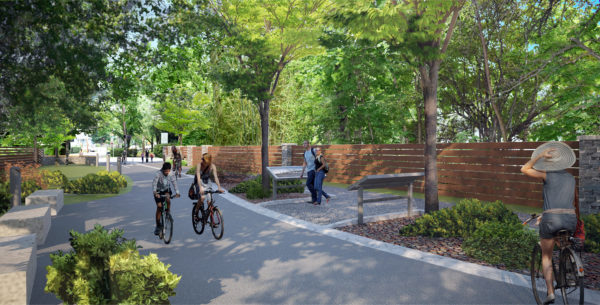 A conceptual rendering of the SUP side path alongside the Esposito Trail.

“South Nyack officials understandably insisted that we maintain the existing natural beauty of the Esposito Trail while ensuring the shared-use path meet the highest standards of design,” New NY Bridge project spokesman Khurram Saeed said. “We are delighted that under this plan, the SUP will preserve trees, feature downward-facing bollard lighting and include privacy fences. We believe this beautiful path will be an extraordinary recreational addition to the Hudson Valley.”
At the request of South Nyack, the Thruway Authority agreed to reconfigure the roadway alignment at Interchange 10 which will close the entrance ramp to the southbound Thruway on South Broadway. Traffic instead will be redirected to Route 9W, where motorists can access both the north- and southbound Thruway (I-87/I-287). 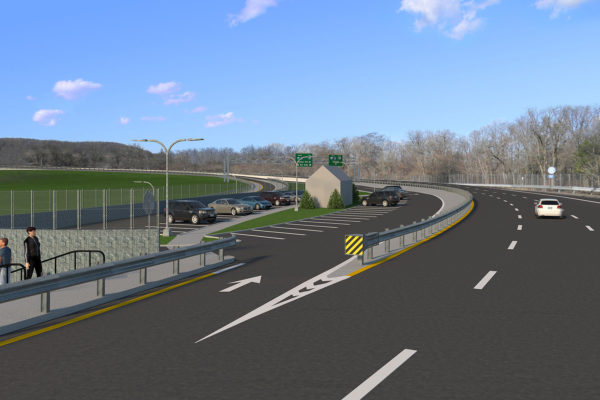 The design for the new bridge’s shared-use path parking in Rockland County.

Christian, the South Nyack mayor, praised the relationship the village has forged with the project team. “Our residents have made it very clear that they want to maintain the residential character of our small village. This plan does that,” she said. “We thank Governor Cuomo and the Thruway Authority for working with us to relocate the shared-use path onto state-owned property and look forward to continuing our strong partnership.”
Several informational boards and visualizations are currently on display at the project’s Outreach Center in Nyack.
This article was originally published by the New NY Bridge.
In this article:Bonnie Christian, shared use path, south nyack, SUP