by Ashley Tedino
The Nyack Window Project, a streetscape exhibition that pairs visual artists with local landlords to create original installations in downtown storefronts,  features 16 locations featuring the work of 15 artists in  Nyack.
Conceived by award-winning set designer and village resident Joanne Howard, the Nyack Window project is in its second year. This week Nyack News And Views features the work of several of this year’s artists. 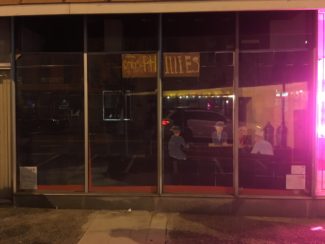 Edward Hopper’s famed painting, Nighthawks, was the inspiration for Batson’s multimedia collage which united with paintings from members in the Nyack Center’s after school program.
Hopper’s childhood home in Nyack has been renovated to an arts center located at 82 N Broadway. The Nighthawks window display was “constructed in three two-hour sessions.” Student and staff participants include Anngellica, Azaria, Darius, Janiya, Julissa, Julissa, Kimberlee, Leah, Malcolm, Max, Ronnie and Winter under the supervision of Bill Batson. During the village’s annual Halloween Parade, Nighthawks was also the theme of the Nyack Center’s float.
Since August 2011, Bill Batson has published the Nyack Sketch Log on Nyack News And Views. In December 2014, he published the book “Nyack Sketch Log, An Artist and Writer Explores the History of a Hudson River Village,” which was a collection of his sketches and short essays. Batson was the recipient of a Rockland County Executive Award in August 2013. He is a life-long artist and activist who is “dedicated to using the visual arts to promote preservation, cultural education and community empowerment.” At the Nyack Farmer’s Market, Batson is the artist-in-residence where he arranges entertainment, sells art, and expands promotional tools for the Village of Nyack.
Nighthawks is on display through the end of January in the windows of the Athene building at the corner of Main Street and Broadway in Nyack. Batson’s entry in the 2016 Nyack Window project was sponsored by Edward Hopper House. 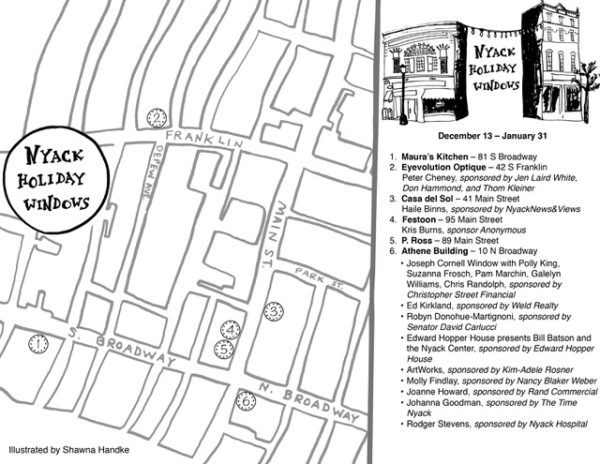