If you’re worried about planet-threatening fallout from a bully-for-business Trump Administration, you can pledge your dollars and your time to any number of environmental organizations. But for some eco-peace of mind right now, a pledge to lead a greener life at home may be just what your soul is yearning for.

The benefits and politics of compost 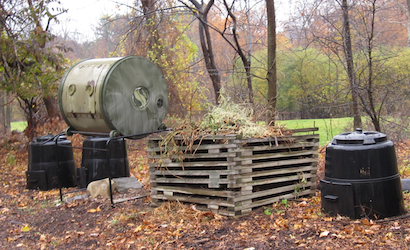 But it’s what compost doesn’t do that may be even more important.

What you put into the compost doesn’t go into the garbage—and about 20% of America’s total trash is food waste. Not only is trash collection a major taxpayer or household expense, but what we carelessly toss is hauled hundreds of miles away in fuel-guzzling CO2-emitting big rigs to upstate mega-landfills, creating an unhealthy environment for neighboring communities—and much more global-warming methane.

Composting and a reduce-reuse-recycle mentality can take a healthy bite out of those tons of trash, saving money and environmental damage. That alone is a good enough reason to plant a war-on-climate-change “victory compost” in your backyard. 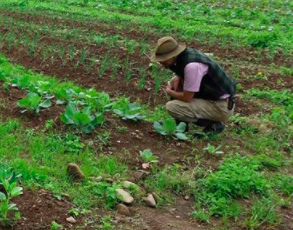 All three were ready with plenty of tips, tricks and metaphysics of composting.

1. Composting is a hot sustainability topic. Who invented it?

The concept goes back at least to ancient Mesopotamia, and is also mentioned multiple times in the Bible, according to Romero-Bosch.

In the 19th century, advances in man-made fertilizers left more natural methods of small-scale agriculture, like composting, in the dust. More recently, organic and biodynamic farms have championed composting. Now a crucial element of  sustainability plans and landfill diversion, the backyard compost bin is as much a weapon against climate change as it is a source of soil amendment. 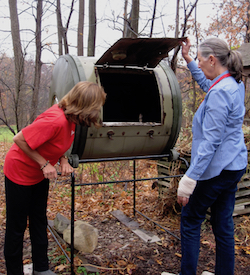 Anywhere from nothing to hundreds of dollars. “Composting is as easy as digging a hole in the ground two shovels deep. Put your scraps in there and cover them up with browns, like soil or dry fallen leaves” said CCE’s Kit Meenan. You can also spend hundreds of dollars on high tech rotating bins, or have a carpenter build a custom bin for you.

The Rockland County Solid Waste Authority has partnered with the CCE to make their “Darth Vader” open-bottom bins available at cost (currently $55).

3. I have a small yard: will the compost stink and draw flies—or worse? 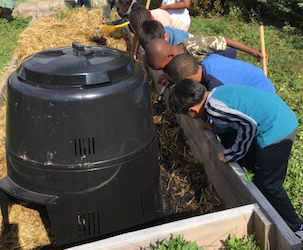 Not if you know what to put in and what to avoid. No oils, fats or animal products (meat, fish, dairy) except for egg shells. With each addition, whether you turn the pile or not, encapsulate any exposed food scraps (“greens”) on top and sides, with “browns”—dried leaves, shredded paper, and used potting soil are all effective. “Think of it as a lasagna,” Kit Meenan said, “food scraps, browns, food scraps, browns . . . ”

Flies and animals will stay away if you obey these ground rules, but you will have lots of hungry microorganisms breaking down the greens and browns, Meenan said. She added that, should the need arise, hardware cloth under an open-bottomed bin will prevent four-footed critters from burrowing up into the pile.

4. What, besides food scraps, can I put into the backyard compost?

You can put in shredded paper, including newspaper, as well as pet hair, dryer lint, tea bags, the rotting jack-o-lantern, used paper towels and tissues, ripped up cardboard, wood ashes, sawdust, plant waste (watch out for weed seeds), and leather (even though it’s animal derived). 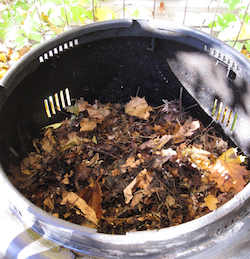 Year-old compost bin. Encapsulate scraps with “browns” and turn regularly and it will keep “sinking”

5. I keep adding stuff to the bin and it’s not going down!

“It needs both air and moisture—with a texture like wrung-out sponge,” Meenan said. Add water to it if needed, and add air by poking it with a stick or turning it.

Boost lazy compost with a shovel full or two of garden soil. If you’re low on autumn leaves, you can use shredded paper. “If you’re using a hole in the ground or an open-bottomed bin, the worms should find their way in and help out too,” said Meenan.

6. Won’t it stall in the winter cold?

Organizations like the CCE  often give compost talks and demos in late autumn, because that’s when your best “browns” are abundantly available. Save those fallen leaves—Don’t give them away!—for year-round compost use. But, CCE’s Meenan admitted, “sometimes in winter, the compost pile just freezes.” She stores scraps in the refrigerator or freezer, or out in the garage in a tightly sealed container, awaiting the next thaw.

Keep a barrel or pile of those autumn leaves right near the compost bin, so they’ll be available even if the backyard is snowed over.

7. I don’t have a backyard: sounds like composting is out for me 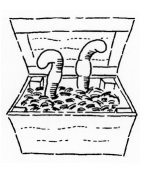 Don’t scream, but there’s vermicomposting—with worms, at home. Yes, people do this, including Kit Meenan. “The worms don’t like the cold, so I keep them in the basement in the summer, and in the laundry room in the winter,” she said.

Tropical “red wigglers” can be bought by the pound from worm farms (like this randomly-selected one). “They eat half their body weight in scraps a day,” said Meenan. They’re fussier than the backyard bin, and won’t eat everything, but stick with some basic rules and they’ll chomp through most of your scraps. Just keep them moist, don’t feed them what they don’t like, and your indoor invertebrates will happily stay put in their newspaper-lined pan.

For a less squirmy solution, there are indoor compost gizmos that will ferment and break down scraps as well, and an inexpensive “stealth composting” do-it-yourself setup.

Compost to go? Rockland Farm Alliance members can bring food scraps to Cropsey Community Farm in New City, where they’ll be added to one of the farm’s many agricultural compost piles.

8. Do I still need fertilizer if I’m using compost on my garden or house plants?

Finished compost at the CCE

Probably not, according to RFA’s Ag Director Romero-Bosch, who sees compost as the linchpin in the farm’s beyond-organic, biodynamic approach:

“Compost stimulates and activates the minerals and microorganisms, and all the different elemental forces in the soil so that they’re more available to the plants. This leads to healthier plant growth. For us, compost is everything: with it, we are able to stay away from synthetic fertilizers and the other man-made things that people put into soil to improve it. It’s also great because it’s taken up as needed during different stages of the plant’s development. Synthetic fertilizers give the plant a big boost of nutrients causing a growth spurt at the wrong time, and that can weaken the plant, and make it vulnerable to pathogens.” 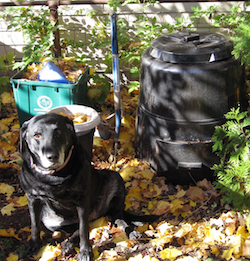 9. Does my attitude toward my compost bin matter?

Well, yes it does, says Romero-Bosch.

The RFA presents workshops in composting, and he encourages students to think of their compost as a living thing, and to treat it like a family pet—observing it, caring for it, and making adjustments when its life force seems to ebb. “You want to vary what’s in it. Layer it. Turn it. Getting that compost ‘heat’ going on smaller piles is more difficult, and the balancing act scares people,” he said, adding that it’s more than worth the effort for the service it provides. 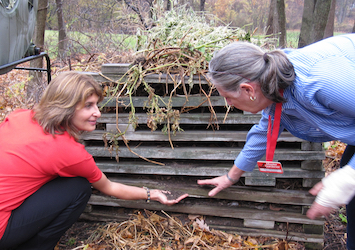 Compost bin for yard waste, made from used pallets, at the CCE. Finished compost is at the bottom.

When you open the door at the bottom of your bin, or dig down to the bottom of the hole, “you should not see anything recognizable, except maybe peanut or egg shells, or the larger pieces that take a long time to break down,” said the CCE’s Christina Mandara. “It should have a rich or neutral smell and a nice brown look. You shouldn’t see any worms or insects in finished compost. If they’re still working, it’s not finished.”

If you want faster results, “the smaller you chop up your scraps, the faster it will go,” added Meenan. “It might be six months to a year for finished compost, instead of two years… But the bottom line is, you’re not putting it out in the garbage, no matter how long it takes for it to break down. That’s what really matters. That’s the big message.”

How to purchase “Darth Vader” bins for composting.

Compost A to Z from the Cornell Cooperative Extension.

Documentary Film: Symphony of the Soil (2012)