When we think of our environment, we typically focus upon things like air pollution, recycling, the health of the river, and so on. But, we are becoming increasingly aware that the effects of electric nighttime light must also be given the same level of attention. Light pollution is a complex and important topic but its cause is simple: Light pollution comes from misdirected artificial light and over-illumination.
For aeons, humans have marvelled at the splendours of the night sky and who among us cannot be awe-struck when enveloped by a star-filled firmament? Yet, our shared cultural heritage and primal connection to the stars is under threat. Experts estimate that one-third of humanity is no longer able to see our very own galaxy, the Milky Way, and many young people now grow up with all but the brightest stars drowned out by artificial lights.

An LED streetlight in southeast Houston, Texas. This energy-saving technology has benefits, but must be carefully managed to avoid light pollution and trespass. Photo by Flick user meltedplastic, licensed under CC BY-NC-ND 2.0.

Over recent decades, encroachment of light pollution from poorly-designed artificial lighting means that dark sky sites are increasingly difficult to find, often requiring us to travel to national parks and other wilderness areas to escape the artificial sky glow from cities and towns that, due to light scattering in the atmosphere, can be seen for hundreds of miles. Although Flagstaff, Arizona, in 2001 became the world’s first International Dark Sky City, satellite images of nighttime lights on our planet reveal the surprising extent of light pollution with the population centres and outlines of Europe and the eastern US being easily traced. Even a badly-positioned light in a rural area has an impact.
In September, Iceland’s capital Reykjavik turned off its street lights so that city residents could once again enjoy a spectacular display of the northern lights. And, in the UK, more than seventy parish, town and county councils have worked together to support the South Downs becoming an international dark sky reserve.

Artificial nighttime light is no longer as benign as once thought and many scientific studies of animals and plants are revealing the extent of its harmful effects. Major disruptions in animals include fatal navigational disorientation during migration, changes to reproductive, foraging and sleep behaviours, and alteration of immunal responses. Humans are animals, too, and light pollution is known to disrupt our natural sleep patterns, to affect behaviour and to possibly alter physiological and disease-fighting processes within our bodies. Glare from unshielded lights can temporarily blind our eyes leading to safety concerns. 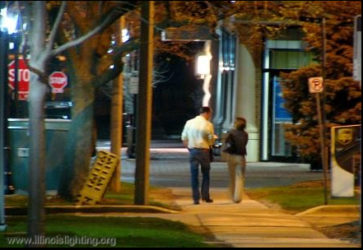 Well-designed lighting solutions allow light to be directed downwards where it is needed rather than outwards and upwards where it is wasted and annoys neighbours, pedestrians and drivers. Indeed, the International Association of Lighting Designers has a core aim of reducing light pollution, and the level of light pollution in developed nations is slowly starting to be addressed. For example, Pittsburgh is in the process of replacing 40,000 light-polluting street lights with more suitable, more efficient, less polluting LED lights. Misconceptions, though, persist.
The view that brighter outdoor lights improve safety is incorrect: Human eyes have trouble adapting to the dramatic contrast between over-illuminated areas and adjacent deep shadows where miscreants may hide, and evidence shows that nighttime security is better when harsh lighting is removed.
Like most communities, the nighttime lighting in the Village of South Nyack is not ideal. But improvements can be achieved by the Village and by residents.

Nyack’s energy committee is talking with NYPA (New York Power Authority) and other providers about the switch to economical LED fixtures for public lighting. The committee will be carefully studying the products and evaluating shades, dimmers and color values to avoid negative health and environmental impacts, according to Sustainability Coordinator Marcy Denker.
Orangetown Supervisor Andy Stewart said that “Orangetown can save a lot of money on energy costs by purchasing our streetlights from O&R and converting to LEDs, and the next step in this process is to issue a Request for Proposals for vendors and installers of LED lamps.” The supervisor said that he grew up in rural New Hampshire where he could actually see the stars at night. “I appreciate the value of darkness and would want to preserve this value, among others, while shopping for the best way to upgrade our technology,” said Stewart.

Over the past year, the Village of South Nyack has been exploring the possibility of a street light “buy-back” which could provide benefits both environmental and financial. A buy-back could produce a long-term cost saving because the street lights would become owned by the Village instead of rented from the utility. Step two would be to consider switching the lighting heads from the current bowl-shaped sodium vapour and metal halide types to full cut-off, energy-efficient LED devices. Full cut-off fixtures direct light usefully downwards, and LED bulbs require only a fraction of electricity—energy that for the most part derives from fossil fuels. As LED technology improves, the colour temperature of the emitted light is more pleasing to our eyes, is less scattered by air particles and contains less of the blue spectrum that adversely affects our bodies. The Village recently joined the NYSERDA State-funded Mid-Hudson Street Light Consortium to be kept abreast of buy-back and LED developments and opportunities.
Residents are encouraged to shield outdoor fixtures to avoid light spilling unnecessarily over the property line or up to the sky. Home improvement stores now carry a wide range of suitably-shielded light fixtures. Look for fixtures that carry the IDA (International Dark Sky Association) Dark Sky logo. Residents can also save money by switching to lower-power LED bulbs which last for years and use tiny amounts of electricity. The Village already has specific ordinances in place to reduce light pollution but the code needs updating to better reflect advancements in knowledge and technologies and to adopt elements of recent regional and state initiatives. 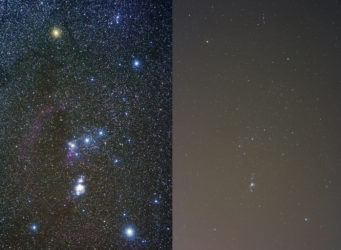 The famous constellation of Orion from a dark site (left) and a light-polluted site (right). Photo: Wikimedia Creative Commons

Since being a boy forty years ago with a telescope in my back garden, I’ve been acutely aware of the increasing intrusion and effects of light pollution in our built environment. I have been lucky enough to travel to truly dark regions of the globe including to a lake in the Belize rain forest where the stars and Milky Way dazzled from a jet black sky, and on research cruises to remote parts of the ocean where the night sky seemed almost to be bursting with stars. Light pollution is pervasive in Rockland County but with better understanding of its impacts and with advances in lighting technologies, the myriad detrimental effects of light pollution on humans and ecosystems can be addressed.
Learn more:

“The City Dark” from the PBS POV series.

South Nyack resident and trustee Andrew Goodwillie is keen on finding
community-supported solutions that benefit residents and our shared
environment. He holds a doctorate in geophysics from the University of
Oxford and works at Lamont-Doherty Earth Observatory.