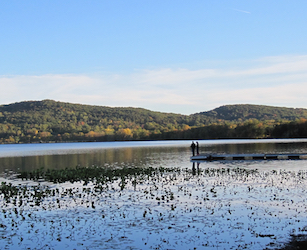 The summer crowds are long gone, and the locals have Rockland Lake State Park to themselves again. They’re walking, running, skating and biking the 3.2-mile paved path around the scenic lake that lies between Route 9W and the foot of Hook Mountain, in Congers NY—just minutes north of the Tappan Zee Bridge.
A time-traveling resident of the bustling 19th-century Town of Rockland Lake wouldn’t recognize the quiet park of today, or many of its plants and trees. This park, like most open areas in New York State, is besieged by invasive non-native species—on land and water—that threaten its ecologic diversity, its economic viability, and the native wildlife that call it home.

The nine lives of Rockland Lake

Thanks to a lucrative rock quarry, the world-famous Knickerbocker Ice Company, and the charms of the spring-fed lake itself, Rockland Lake circa 1900 was a industrious, prosperous small town that attracted visitors from near and far.

With an eye toward creating a park at Nyack Beach, the Palisades Interstate Parks Commission (PIPC) bought out the Manhattan Trap Rock Company in 1911. By the 1920s, electric refrigeration put an end to the ice industry. Tourism and entertainment—resorts, bungalow colonies, nightclubs—took over as the town’s main income generator through the 1950s. But without a steady source of year-round income, the Town of Rockland Lake slowly declined.
In 1958, the PIPC bought out the lake and the surrounding 225 acres and, during the 1960s, most (but not all) of the homeowners as well. The park we know today began its life with the opening of the North Pool complex in 1965. 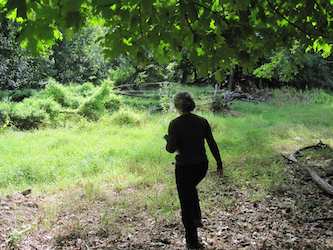 The new Rockland Lake State Park of the 1960s was landscaped, mowed and manicured. But by the 1990s, environmentalists were sounding the alarm about invasive plant species. Some of these, like Japanese barberry, were probably used in the park’s original design. NY State and the PIPC got formally involved in fighting invasive plants around 2006. Now, the park’s green invaders hide in plain sight, many dominating large swaths of meadow and woodland.
Some, like mugwort, were brought along by early European settlers. Others, like black swallow wort—deadly to the Monarch butterfly—arrived as botanical garden specimens in the 19th and 20th century from Europe and the Far East. More recent Asian pests, like Japanese stiltgrass, slipped in via vessels of foreign trade. One thing they have in common: a lack of enemies. They multiply unmolested by bunnies or bugs, and crowd out native plants that are part of the natural food chain.
But it’s not all gloom at the lake. There are areas where native plants and trees are making a stand and flourishing, with help from some dedicated scientists. I tracked down these environmental SWAT team leaders to ask about their work with invasive species at Rockland Lake.

Invaders in the water 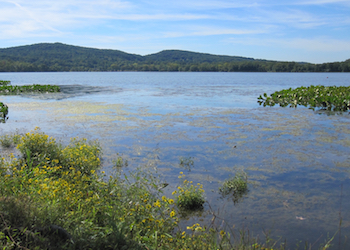 My first call was to Karen Terbush, who oversees the removal of aquatic invasive plants for the NY State Office of Parks, Recreation and Historic Preservation—Environmental Management Bureau.
“There’s water chestnut [in Rockland Lake], and we’ve been working on pulling it out a couple of times a year,” she said. “There’s quite a bit!” Terbush added that this Eurasian invasive plant reduces oxygen, provides poor food for the lake’s organisms, and can take over an entire lake, interfering with recreational use, like boating and fishing.
Another watery woe comes from intermittent blooms of harmful blue-green algae, capable of severely sickening those who come into contact with it. “Sometimes it’s extreme and at other times it’s isolated to a cove.”
What causes this problem?
“A lot of nutrients go into the lake—lots of nitrogen and phosphorus lawn fertilizer runoff from nearby developments.”

Invaders on the land 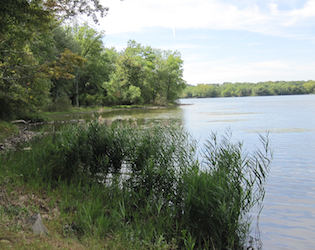 Some of the plant invaders are handled by Rockland Lake’s own crews, like the fast-growing invasive reed phragmites, which is elbowing out the native cattails that once ruled the shorelines and marshes of Rockland County.
The local crew has backup from the NY State Office of Parks, Recreation and Historic Preservation. From their perch in Minnewaska State Park in Kerhonksen, NY, Invasive Species Control Director Bob O’Brien and Invasive Species Project Coordinator Sarah Travalio keep a careful eye on Rockland Lake State Park year round, planning and carrying out management programs for harmful invasive plants and  insects.
How do you attack invasive species in our parks? 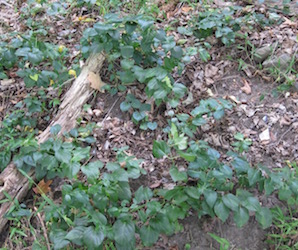 Black swallow wort on the woodland floor at Rockland Lake

How is the battle going?
“We have made a lot of progress since the program began in 2006,” said Travalio. “With some species, it takes time to determine whether controls are effective, whereas with others, the work that you do has an immediate and measurable impact.”
And which invasive plants are most concerning?
“We have often focused on black swallow wort, pale swallow wort, phragmites, Japanese stiltgrass, and Japanese knotweed, although the plants that we choose to focus on are often very site-specific. Some of the greatest emerging threats are the mile-a-minute and kudzu vines.”

The PIPC is still watching over Rockland Lake 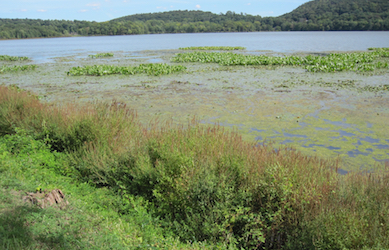 A close ally of the NY State Parks eastern Strike Team is Ed McGowan, who also works closely with the Rockland Lake’s local park administration His title: the PIPC’s Director of Science for the Palisades Region and the Trailside Museums and Zoo at Bear Mountain. His top tasks: invasive plant control, and the renewal of the Nature Center at the north end of Rockland Lake.
I spoke to Ed McGowan by phone from his office at Bear Mountain.
How do you prioritize which invasive plants to target?
A lot of invasives in this part of the state are entrenched—they’ve been here a long time—so we try to put our energies toward the new and emerging invasives. We’re now targeting and attacking the Asian mile-a-minute vine.
I know that mile-a-minute vine can be pulled up by hand. What other methods are used to control invasive plants in the park? 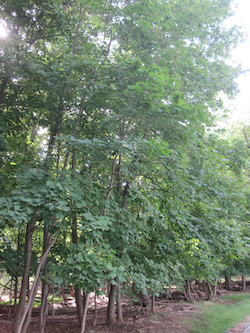 Quite a lot of swallow wort has come in in the last five years. It’s a really challenging plant. The roots don’t come up easily, and nothing eats it. Herbicides are needed, and more than one treatment.
A biocontrol agent is under study. Researchers went to South Central Europe [swallow wort’s native land] to look for insects that are limited to eating this plant. One is being tested to see if it will eat any related plants, like native milkweed [essential for Monarch butterfly reproduction]. It’s a long and arduous process.
Even though a biocontrol agent helps, it won’t eradicate black swallow wort. It will reduce the seed count, and weaken the plant, but it’s not a magic bullet.
One area at the north end of the lake seems to be almost entirely native. It has meadow grass, native trees and shrubs, and there are even bluebird nest boxes. How did that get done?
That’s an old field habitat that’s been left unmowed and largely to its own devices. We added bluebird boxes, and you’ve got deer-resistant native sweet gum trees. The dense grasses and sedges packed in there help keep out the invasives.

How can the rest of us help?

The biggest thing that the average citizen can do to help is to educate themselves on the identification of common invasive species, and then keep an eye out for anything that seems out of place. There are a number of websites, such as the iMap invasives geodatabase, where members of the general public can report suspicious finds.
Look into local volunteer organizations such as the Partnerships for Regional Invasive Species Management [PRISM], Cornell Cooperative Extension, Local Land Trusts, etc. that offer invasive species training and volunteer service days if you are interested in learning more and helping out with the effort. 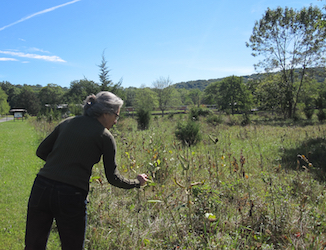 Marcy Denker with native milkweed and bluestem at Rockland Lake

Thanks to Nyack Sustainability Coordinator and landscape designer Marcy Denker for walking with me around Rockland Lake and identifying plants, shrub and trees.
Learn more:

Marcy Denker on the New Native Gardening in NNaV

The Mile-a-Minute Project of the Hudson Valley

Find out about Friends of Rockland Lake and Hook Mountain

Listen to an interview with Robert C. Maher on the Rockland Lake Ice Industry.