They’re a fact of suburban life: plastic bags of advertising circulars tossed by invisible hands onto your sidewalk or driveway. Once in a while they make it to the porch or the steps but, more often than not, they land in prime real estate for the neighborhood canines to “mark”—or worse. By the time you get home, you take a look and say, “Maybe when I’ve got gloves on . . .”
And there they sit, an unsightly mess, waiting for the rain to wash them into the nearest storm sewer or drainage ditch, where they cause blockages, and carry bacterial and plastic pollution to local waterways.
And then there’s the waste—more than you think—that has to be dealt with, one way or another.

The invisible made visible 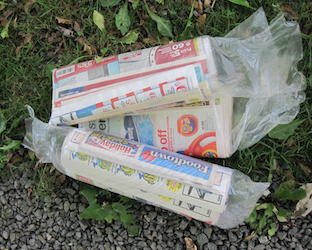 Circulars accumulate at the side of a South Nyack driveway

While backing out of my South Nyack driveway one day last month, I saw a dirty white van turn the corner onto my street. In front of each house it slowed a bit, and then two packets of circulars flew out its window. The driver didn’t have a major league arm: most of the packets landed on the grass strip between sidewalk and gutter.
Finally, the invisible was made visible. I stopped and wrote down the van’s license plate number, noting the make of the van. Finally, I had something I could use to make this stop—maybe.
There would be no citation for littering: South Nyack trustee Andrew Goodwillie had looked into this already. He said, by email, that there are free-speech protections for the distributors. There would have to be another way.
I had brought the two film plastic bags into the house—untouched by dog—where I took them apart, looking for clues. They each had identical contents. Inside was the August edition of “Rockland Essentials,” a 22-page advertising magazine, “printed on bright white recyclable paper.” There were a couple of pages of local event listings and brief profiles of two notable Rockland residents. All the rest was ads for businesses, both small (Simple Beauty Hair Studio) and large (the Bariatric Center at Nyack Hospital). There was a website URL on the cover page, and the website had a phone number. So I dialed it. 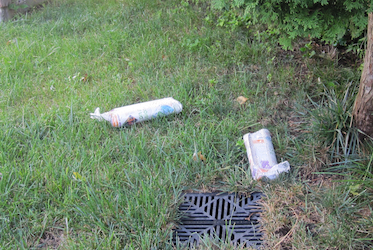 Nowhere near the porch.

The receptionist at Tri-State Media (also known as TSMGroupNY.com and Pennysaver) in Elmsford immediately routed me to Fred the circulation manager, who was not going to address my overarching environmental concerns, or why the driver had thrown two identical packets in front of my house (as had often happened before).
“Give me your address and you won’t get any more of them,” was his brusque advice, “but you’ll be missing valuable coupons from the supermarkets that just opened.“
That’s okay, I can get them online. And my neighbors don’t like getting these things either.
“If they don’t want them they should just call me and they won’t get them. Will that solve your problem?” I gave my address, and he hung up first.

Late August brought another delivery of circulars in the clear film plastic bag. This time only one packet landed on my sidewalk, but it was crammed full to bursting with two of every circular. Time for another call to Fred, who promised results this time, and offered to fire the driver, if I wanted him to. (No, not necessary. Just take me off the list.) 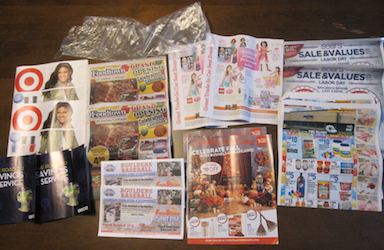 Contents of Sept. 9 delivery. Every item is duplicated.

September 9th—another delivery. Again it was one bag stuffed with duplicate circulars. I dialed Fred again (number memorized by now) and asked why I was still getting two of everything that I didn’t even want one of.
“I’m going to make this short and sweet and simple for you,” the besieged circulation manager said. ”Anyone who doesn’t want these circulars just has to call me.” He repeated—several times—his offer to fire the offending driver immediately. (No, thanks.)
What about all the double circulars? Fred said “that was a fluke.”
But I wondered if advertisers, who were apparently only reaching half the stated circulation, would accept these repeated “flukes” so nonchalantly.
Finally, on September 14, my neighbors received their circulars from Tri-State and I did not. Their circular packets didn’t appear to have any duplications, and even landed a little closer to the houses.

What You Can Do

There are two companies locally who put advertising circulators in your driveway and front porch: The Journal News and Tri-State Media Group NY (Pennysaver). If you contact either company, they will take you off their distribution list (although it might take a few calls to get results)
The Journal News uses blue film bags to distribute their advertising circulars. If you would like to be removed from their list, call their Customer Service number: 800-942-1010 (8a-7p Mon-Fri, 8a-11a Sun).
Advertising circulars in clear plastic bags are distributed by Tri-State Media Group NY. Call them at 914-592-5222 and ask for the circulation department. Give them your address (name not required) and they will stop deliveries.
To stop receiving postal direct-mail advertising, you can opt out by signing up on the National Do Not Mail List or interactively on DMAChoice website.

The packet I received on September 9 weighs 8.5 ounces. But, with the duplicate circulars, it’s twice as heavy as it should be (and presumably it went to only half the circulation addresses). Let’s be generous and allow for the plastic bag and cut that in half for a “normal” delivery weight of 4 ounces. It’s easy to visualize the impact of these unwanted circulars in my own little neighborhood. But what’s the big picture for Rockland County?
The Rockland Essentials magazine website  (which shares the same phone number as Tri-State Media and TSMGroupNY) shows a total Rockland County circulation of 69,591. I noted four circular-packet deliveries to my neighborhood in the span of one month, from mid-August to mid-September. Let’s do the math for Rockland County:

Where do all the circulars go?

These film-bagged advertising packets have to be disposed of somewhere. It’s impossible to know for sure, but it’s a fair guess that not all of them—not even most of them—get taken apart and recycled appropriately, especially if they’ve been rotting away under the porch, or next to a sidewalk tree, or down in a storm drain.
Rockland County does not accept film plastic bags for curbside recycling, but local big box stores and supermarkets do. They ask for clean, dry plastic bags. But, after life on the streets, those circular bags are anything but clean. A lot of these packets probably end up tossed whole into the trash, picked up by street sweepers, or washed into storm drains. 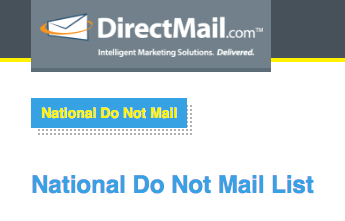 There’s even more waste than meets the eye in unwanted circular packets. Kerri Scales, Education Director of Rockland County Solid Waste Management Authority, wants us to think beyond what we see. “It’s not just the printed materials and plastic bag,” she said in a phone conversation. “Think of all the other resources wasted: ink, paper, petroleum, the energy used in manufacturing, and the fuel and emissions of the vehicle that delivers them. It’s a ton of resources being wasted.”

Trustee Goodwillie has long been frustrated by the litter problem posed by these unsolicited tossed circulars, and not just for aesthetic reasons. When I gave him Tri-State’s phone number, he said via email:

I am disheartened when I see the plastic-wrapped fliers in the gutter close to storm drains. It is especially upsetting knowing that municipalities are obligated to spend much effort to conform with and abide by stringent State-mandated storm water management techniques and responsibilities (known as “MS-4”). Yet, here we have advertisers tossing what I view as litter onto private and public property but making no effort to pick up any items that get flung carelessly.

Goodwillie says that he and a number of his neighbors have called Tri-State Media to have their names removed from the list, and he’ll be monitoring the results.
Sustainable Saturday is determined to help you reduce the waste, litter and pollution from unwanted circulars. If you call and opt out without success, please email us and we will try to help. It took a few tries but, to give Fred his due, Tri-State did—and we hope forever—remove my address from their list.
Learn more:

See more ways to reduce waste and tame your trash.